'There Is No Such Thing As Fate, Because There Is Nobody In Control': My Name Is Monster By Katie Hale 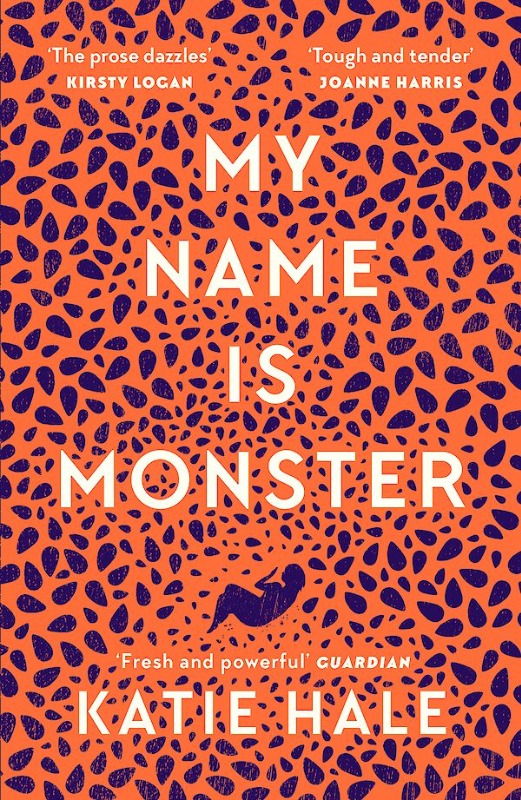 The debut novel from award-wining poet and writer, Katie Hale, is a compelling page-turner; a story told from the dual narrative of the two protagonists, both named Monster. The first we meet is almost thirty and alone in a deserted world, and she considers what is the price of survival but also asks the more important question: if you are the sole survivor, “Then what?”.

This story explores what it might be like if you found yourself alone in a post-apocalyptic world and the reality of Monster’s predicament is skilfully illustrated by the author, through the observations and thoughts of our first protagonist. We know there has been ‘the Sickness’ – a pandemic that Monster has survived, in addition to accompanying wars, but now, haunted by memories, she places one foot in front of the other on a journey – to where, she does not know.

The short chapters recount her circumstances leading up to this point, alternating between recollection of events recent and historic, and her own personal musings. She is, it would seem, naturally selfish, but also quite self-aware. She tells us her name was given to be ironic, as an affectionate joke perhaps, but that it stuck, as nicknames do, and that now she thinks “it takes a monster to survive when nobody else can”. You don’t warm to her, and she isn’t always pleasant, but you respect her strength of character and she strikes you as the type who would pay no heed to your opinion anyway. However, you realise she is also deeply unhappy, which, again, is to be expected. She tells us that “Hope is a killer. It puffs you up like a balloon, then turns away as reality jabs like a needle”.

The novel reads almost like a personal journal; the reader feels like a trusted confidant. Monster is honest, but that is because she feels she is only talking to herself - there are no others. She walks for days, trudging through empty landscapes, recalling the Sickness and the War, memories from her childhood. She passes through forests, abandoned villages, occasionally catching sight of beautiful scenes, but it is “the kind of sequestered beauty that has no right to exist anymore”. And she is not always sure of her purpose; currently her objective is walk, sleep, eat – survive. She does sometimes convey a feeling of futility, perhaps she has become as redundant as money in a world where there is nothing to buy. She returns to the home of her parents to retrieve a shoebox full of her childhood treasures. The transitory objective of reaching her home, she tells us, has “sparked within me like something electric, drawing me on” but the house, now empty is “a house without a purpose” and so she keeps travelling. 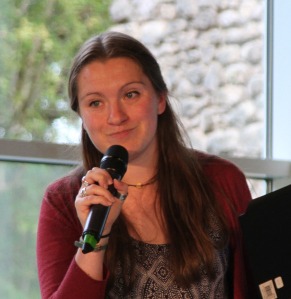 Katie Hale - Photo Credit Tom Lloyd
As the narrative progresses we discover more of Monster’s mindset, understand more about why she is the way she is. The descriptive narrative can be so simple, to the point where “I stopped being human. I became a machine – less than a machine, a parasite clinging to its host”. But the words can also be reflective, provocative of thought by the images they conjure in the reader’s mind. Monster talks of the ocean - “The sea is a creature of the mind. It is a leviathan lurking, in perpetual motion, an essay in the impossible”, and of the cities - “Once, they were mutable, changing and transforming with every person passing through”, but now a city is only “still and dead. It sits placid in the landscape like a washed-up jellyfish”.

Monster finds a place to settle, not far from an abandoned city. Roaming the streets in search of food and provisions, one day she encounters a young girl whom she brings into her care. The introduction of another human into her life reveals yet more to us about her character, how she retains ancient bitterness and hatred that sits at odds with the reluctant affection she starts to develop for the child. Their interaction causes us to wonder how the adult Monster (who names the child after herself) engaged with her peers, back when the world was alive. Has she always been so stubbornly alone, shunning affection and suppressing her feelings, and are these the traits that have kept her alive until now?

So begins a curious mother-daughter relationship which explores, thematically, the role of woman, and of self-identity. Monster teaches the child the simple routines of the life she has adopted. The child gradually becomes less feral and the second half of the book is told from the child Monster’s perspective. We see the world through her eyes, hear the thoughts she chooses to share, and we receive patchy recollections of her past, which is fragmented. We cannot be sure which of the two Monsters is the more reliable of narrators – their truths cannot be countered, so we can’t place full trust in what they share, and naturally their perspectives are a touch skewed. I felt that the child Monster kept things hidden - her narrative not as open and forthcoming as her mother’s.

Why is it that Monster adopts the role of mother – is it inherent in female nature? Would their roles be different if they had been male, perhaps adopting instead the master-slave paradigm, as is played out in Robinson Crusoe, which we are told the book is inspired by? Would the female role and her relationships change in a world absent of men; could this book be seen as a testament to the feminist agenda? Through both Monsters, we recognise the dependence we have on others to give us strength, comfort and confidence, irrespective of gender – a theme widely examined in post-apocalyptic literature.

Despite the extraordinary circumstances under which the two Monsters live, the inherent tension that mother-daughter relationships inspire comes to the surface: adult Monster’s original parental intentions don’t quite manifest as desired and child Monster develops with her own agenda. Here, themes of power are explored: the instinctive struggle for it, who has what right, and who determines the hierarchy in a world of only two. Gender is transcended – in an empty world, it becomes irrelevant. The individual is key, and their strengths, weaknesses and desires. Monster is Monster, and will not be judged according to her sex – she is a survivor who just happens to be female.

The story’s plotline falters in the second half, erring towards the inconceivable, but thematically, you understand why Frankenstein is cited as a source of inspiration. Overall a very enjoyable and engaging novel – you really do want to find out how it will conclude. The thoughts of the dual narrators are captured with illuminating language – both characters are equally complex and challenged; each is a headstrong personality who ultimately exhibits the need, or desire, for comfort in family, despite mutual differences. As the book closes we hope that they remain together and endure, because despite their flaws, and our uncertainty of trust, we find we really have formed an affection for the two.


My Name is Monster by Katie Hale is published by Canongate
More articles in this series...
Review: The Stranding By Kate SawyerReview: You Let Me In by Camilla BruceInterview With Victoria PrincewillThe Traumatic Legacy of Denial: The Sanatorium By Sarah PearseThe Imposter by Anna Wharton: A ReviewGirl In The Walls By A.J. Gnuse - A ReviewReview: Lightseekers By Femi KayodeAn Interview with Alice Ash - Author of Paradise Block‘ …Really Real Poor People, Surviving Alone Together’: Paradise Block By Alice AshInterview: Neema ShahKololo Hill By Neema Shah: A ReviewInterview With Catherine Menon - Author Of Fragile Monsters‘Ghosts Everywhere I Look. Ghosts Everywhere I Don’t’: Fragile Monsters By Catherine MenonInterview: Bethany CliftLast One At The Party By Bethany Clift: A ReviewInterview With Frances Quinn - Author Of The Smallest Man'A Hero Of Our Time!': The Smallest Man By Frances QuinnInterview: Thomas McMullan, Author Of The Last Good ManReview: The Last Good Man By Thomas McMullanInterview With Nikki Smith - Author Of All In Her Head