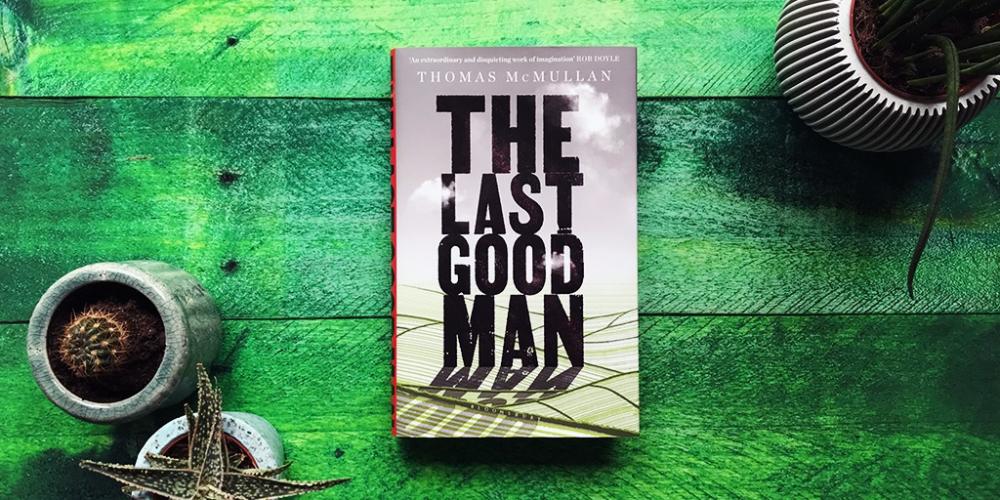 The Last Good Man is a uniquely disquieting and sinister debut novel from the writer, critic and journalist Thomas McMullan.

It is set in an unspecified era which is just one of the many unanswered questions posed by the narrative. Despite the apparent simplicity of the scenario, the reader soon becomes aware of the subtle themes the author is exploring. Some themes are clearer, others linger in the subconscious to be mused upon after the final page has been turned. This approach, together with some clever use of syntax, was refreshing. I believe there is something indefinably unique to this author’s approach and on finishing, you determine the true complexity of the narrative – going beyond words typed on the page to stir in the readers’ mind questions on human nature, and the great “what if?”.

The setting is a village in Dartmoor. Like an oasis in a desert, the village provides respite from the wilds of surrounding moorland, which itself appears as if a living character in the book. There is undoubtedly a social commentary, transporting aspects of our everyday to an entirely imagined locale. The book examines human behaviour, social structure, the need for and purpose of justice, whilst asking whose role it is to set the rules. It tracks the human response, human emotion, the need for community and relationships which all exist in parallel with the conventions we come to accept.

The landscape is illuminated in the prose: anthropomorphism is used as a literary tool throughout to give life to the inanimate. There is a palpable sense of threat and exposure that symbolically surrounds the village, creating almost a sense of claustrophobia, as if constantly surrounded by a thick cloud of swirling, menacing fog. Yet the character of the moorland, richly described, remains a threat unknown – it is not its appearance we are afraid of; it is knowing the extent of the damage it might wreak.

The atmosphere has a distinct post-apocalyptic,quasi-dystopian feel to it. We begin with the central protagonist, Duncan Peck, arriving at the village in search of his cousin, Hale, who we learn left the city years before. The cities are described to imply abandonment: they are falling to ruin, set ablaze, left to rot, but Peck, having recently left, suggests that there is still a resident community in the dilapidated streets. In the village, the inhabitants appear to have the mentality of survivors, but of what, we never learn. We do not know how long they have lived this way, but one assumes their arrival was not recent. They have built a schoolhouse, and a pub, and have established their own concept of law and order, which is a central component of the plotline.


Thomas McMullan. Image by Jonathan Ring.
Overshadowing the village is a wall. On this wall, posters announce a celebration, or a gathering, or that kittens are for sale. But on the same wall it is commonplace for posters to appear to reveal a wrongdoing, or to place accusations of immorality or criminality. Posted under the cover of darkness, they are an anonymous means of exhorting the villagers to seek justice, however misplaced or false the accusations may be. And again, this wall, unexplained, but accepted, occupies a central role among the characters of the novel. It sends a chill through the narrative. Walls are often used to imply threat in literature, whether the eponymous Wall of John Lanchester’s dystopian novel, or the very real Separation Wall described in Colum McCann’s Apeirogon – however in The Last Good Man, it is not the wall itself that casts a spell on the people, instead it is the symbolic tool – of judge, jury and executioner.

Peck’s cousin Hale has made a reputation for himself as the village strongman – the person to whom all turn to see that justice is upheld. In this enclosed and secluded environment, Peck inevitably causes alarm and mistrust. The community, despite their outward appearance of collaboration, the declarations that “deep down we’re fond of one another” are, symbolically, like a community living under the shadow of an invisible dictator. To some extent they are not dissimilar to the ciphers of Zamyatin’s We given that this is a world that we only scarcely recognise, the people all have a role to play to fulfil their purpose, and when a foot is put out of line, it is noticed, and sanctions are imposed.

However, the people are still very much human, burdened with inevitable flaws. Where there are humans, there are secrets, there is conflict, there is emotion, and everything is subject to corruption. Human behaviour and instinct cannot be suppressed, we are our own undoing.

The use of third person omniscient narrator, although centred around Peck, gives us a wider perspective, but ensures that the reader is reminded of their position as the unwelcome visitor. We cannot shake off the sense that we too are being watched whether by another person or something wholly unknown – something lurks in the shadows.

McMullan’s descriptive prose struck me as truly original. We are told the smell of roast chicken “animates the air”, that pies removed from an oven “purr in their new life” and the air “is wounded with a draught.” This phraseology enlivens what, in my opinion was sometimes a slow pace to the narrative. Whilst reading, I did on occasion feel frustrated by the lack of progress but I kept turning the pages to seek a form of resolution. On reflection, I realised this was perhaps another deliberate action of the writer. My criticism of a lack of pace becomes void when you realise it makes perfect sense. If we too lived in a village, under the shadow of a wall and in fear of what might take place, would we too not feel as if the passage of time was inexplicably slow?


Also by Caroline Spalding...
Review: Cold Enough For Snow By Jessica AuReview: Good Intentions By Kasim AliReview: Strangers I Know By Claudia Durastanti, Translated By Elizabeth HarrisReview: The Love Songs Of W.E.B. Du Bois By Honorée Fanonne JeffersVioleta By Isabel Allende - A Review
McMullan does explain that the idea for the book came from his experience of seeing the da zi bao written on the walls of a Chinese university between 2011-13. when he worked there in the translation department. These “big character reports” – public notices, often anonymously posted, date from the imperial period but were significant during the Cultural Revolution when those named on these declarations as ‘anti-revolutionaries’ would be attacked by gangs – a practice that was widespread. There are obvious comparisons between the anonymous defamatory declarations posted on walls during the Chinese Cultural Revolution and the wall that overshadows this Dartmoor community. It could also be interpreted as a reflection on the use of social media today to spread misinformation, to make criticism and inflict abuse, however to draw a direct analogy would be too simplistic. You could compare the anonymity of those who place accusations on the wall to the faceless identities of social media ‘trolls’, but the book is not a straightforward comparison and it leaves the reader open to personal interpretation.

It is possible to see some light humour in an otherwise dark novel. The villagers make no reference to technology, to phones, or to the internet and appear to have wholly reverted to a more primitive way of life. And similarly, their milder methods of punishment appear more anachronistic, if not comically inventive. Their peculiar form of justice demonstrates that irrespective of the time, epoch, or living conditions, some basic elements of humanity prevail. The villagers retain the bespoke human ability to feel emotion: love and lust, hatred and mistrust and they are very capable of inflicting cruelty, especially when they feel it justified.

The Last Good Man is a truly original and imaginative take on the modern zeitgeist: its evocative descriptions and believable characters compound a sense of unease. There are comparisons that may be made to our society, however we feel that the society McMullan has created is very real, with its own distinct nuances. For a book that creates a sense of suspense, implied threat and uncertainty, it is only fitting that it leaves the reader with many questions – much like life in our current, wholly uncertain times.


The Last Good Man is published by Bloomsbury
More articles in this series...
Review: The Stranding By Kate SawyerReview: You Let Me In by Camilla BruceInterview With Victoria PrincewillThe Traumatic Legacy of Denial: The Sanatorium By Sarah PearseThe Imposter by Anna Wharton: A ReviewGirl In The Walls By A.J. Gnuse - A ReviewReview: Lightseekers By Femi KayodeAn Interview with Alice Ash - Author of Paradise Block‘ …Really Real Poor People, Surviving Alone Together’: Paradise Block By Alice AshInterview: Neema ShahKololo Hill By Neema Shah: A ReviewInterview With Catherine Menon - Author Of Fragile Monsters‘Ghosts Everywhere I Look. Ghosts Everywhere I Don’t’: Fragile Monsters By Catherine MenonInterview: Bethany CliftLast One At The Party By Bethany Clift: A Review'There Is No Such Thing As Fate, Because There Is Nobody In Control': My Name Is Monster By Katie HaleInterview With Frances Quinn - Author Of The Smallest Man'A Hero Of Our Time!': The Smallest Man By Frances QuinnInterview: Thomas McMullan, Author Of The Last Good ManInterview With Nikki Smith - Author Of All In Her Head