Bethany Clift
Bethany Clift’s debut novel, Last One at the Party, will be published on February 4th by Hodder & Stoughton and offers the reader some light-hearted escapism in the current circumstances, despite the novel’s uncanny prescience.

In the book, the protagonist is a female sole survivor after a deadly pandemic has wiped out humanity, and the author tells us she “is not a scientist or a soldier, or even a decent cook; she is just doing the best she can, given the circumstances.” It is, we are told, a book not about a pandemic, just with a pandemic in it: it is not about death, it is about life, and one woman’s survival: “her journey, not the end of everyone else’s.” Thematically, the book also asks us to consider what it feels like to be a woman in today’s society. We know for the protagonist, ‘the end of everything was her beginning’ but for the rest of us, at least with Donald Trump safely removed from power, we can assume that life will go on. So, what therefore is the author’s perspective?

Bethany told me that to be a woman today for her “is to be a bundle of confusion and contradiction.” She believes there is still a long way to go to achieve true equality, both in terms of equal pay and rights, but also in the home and broader society. Bethany is passionate about her career and adores her children but appreciates that for many, it is easier to just pretend that “everything is fine”. She would like to be honest about her mental health, not feel pressured by the media and platforms such as Instagram to hide the laughter lines she has “worked (and) laughed bloody hard to get” because “getting old is bad.” She says the constant media barrage that “encourages us to want more to be better” is exhausting, but there is no simple answer. “We are all just muddling through day-to-day, hoping to get it right some of the time.”

Many people use literature as a form of escapism, and for Bethany, her favourite genres are sci-fi and apocalyptic literature. With sci-fi, she tells me the attraction is the “endless possibilities” it presents, “there are no limits to the adventures we can take through space and time; to the future that is, so far, unwritten.” Reading apocalyptic books, Bethany often finds herself asking ‘what would I do?’ and the literature, combined with imagination, she believes makes readers push their own boundaries, to explore what they might truly be capable of. Historically, she says, “we conjured Gods to help us process our place in the world”, but now we have art, literature, music and films “to form our own image of ourselves and humanity.” By exploring our own “personal universe (we can) feel better about who we are and where we are!”

A lifelong love of cinema inspired Bethany to write. Without knowing it at the time, it was likely her first ever visit to the cinema, as a poorly child at Christmastime, to watch ET that started the ball rolling. “I remember my absolute terror at the first reveal of ET, cowering into my Dad’s arm, peaking at the screen to see what he looked like; and then the journey through the next 100 minutes, a rollercoaster of learning, acceptance and finally love for the freaky looking alien. I forgot my cold…and completely immersed myself in the story that was unfolding in front of me. It was utterly thrilling and…is still one of the most visceral and vivid memories of my childhood…I knew I wanted to write, that I wanted to elicit the same instinctual and emotional reaction from an audience, that I wanted to make them feel the thrill that I had.” 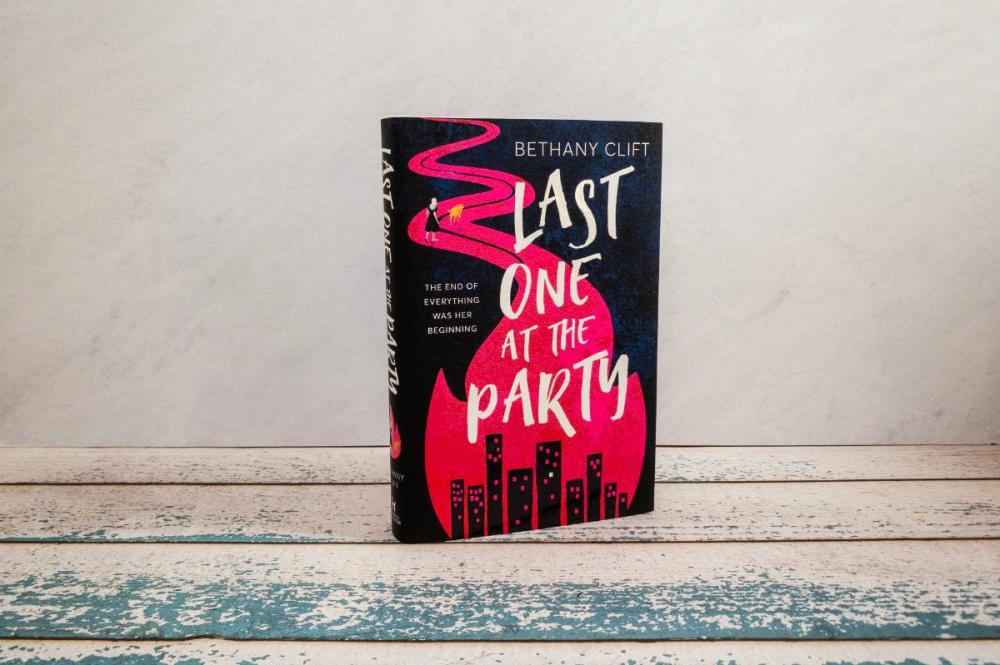 Naturally, this had led to Bethany writing TV and film scripts for over ten years. Five years ago, she and her husband, Peter Handford, created a production company, and wrote, cast, financed, produced and directed a horror movie entitled Heretic that was released in UK cinemas and on DVD. They’ve subsequently formed a new company, Saber Productions, through which they are currently developing several TV and film projects.

The TV rights for Last One at the Party have been sold and Bethany is actively consulting on the adaptation as it progresses. The rights have also been acquired in America and eight other countries, so she is keen to see how the novel is received overseas.

Meanwhile Bethany is ‘deep in the writing process’ of a second novel about which she won’t reveal much, as it is likely to change. However, we can be sure that it is an unconventional love story set in the future and involves Quantum computing. When writing, Bethany has discovered that she is not a planner. She abandoned the process of plotting a novel post-it-note-by-post-it-note on the kitchen walls in favour of writing about her characters in order to get to know them, to allow them to develop. This therefore explains the volumes she produces then discards – Last One at the Party was originally over 800 pages long, of which only 300 made the final cut. For her current novel, she has already deleted over two hundred pages, but the writing helps the characters become fully formed.

In addition to her love of sci-fi and apocalyptic novels, Bethany also adores horror, romance, thrillers and YA fiction – her “incredibly unfocused book collection” comprises “vastly disparate writers, but the one thing they have in common is that all know how to tell a bloody good story.” She admires Jilly Cooper for “her masterly plot and world-building”, Stephen King’s “prolific imagination”, the “stark poetry” of Cormac McCarthy and the “flowing lyricism” of David Mitchell. If pressed to pick a favourite, from the sci-fi genre it would have to be The Forever War by Joe Haldeman. It “changed my view of the world, set me on a completely different path in life and remains my most treasured book to this day.”

And the one she wishes she’d written herself? That would be The Handmaid’s Tale. Bethany is in awe of how Margaret Atwood “simply and subtly” creates “a world and society that seems both horrific and entirely plausible”; by weaving so many strands together, “it seems incredible that she has managed to pack so much into 311 pages!” It caused Bethany to miss seeing the Grand Canyon whilst on holiday, instead opting to remain in the car to finish the story: “how could I possibly not want to have written that!”

Unlike her protagonist, Bethany is very practical and adores the great outdoors – she loves camping and can often be found in her garden, either tending to flowers or digging through the mud. In future, she would love to live in a more remote location, escaping the light pollution that currently obscures her view of the stars. One day she’d like to have a firepit, beside which she could sit to observe the night sky. A great end to her own life story, she tells me, would be a journey to the stars. Perhaps influenced by her love of sci-fi, she says “who wouldn’t want to be an astronaut or Space Pirate?”
More articles in this series...
Review: The Stranding By Kate SawyerReview: You Let Me In by Camilla BruceInterview With Victoria PrincewillThe Traumatic Legacy of Denial: The Sanatorium By Sarah PearseThe Imposter by Anna Wharton: A ReviewGirl In The Walls By A.J. Gnuse - A ReviewReview: Lightseekers By Femi KayodeAn Interview with Alice Ash - Author of Paradise Block‘ …Really Real Poor People, Surviving Alone Together’: Paradise Block By Alice AshInterview: Neema ShahKololo Hill By Neema Shah: A ReviewInterview With Catherine Menon - Author Of Fragile Monsters‘Ghosts Everywhere I Look. Ghosts Everywhere I Don’t’: Fragile Monsters By Catherine MenonLast One At The Party By Bethany Clift: A Review'There Is No Such Thing As Fate, Because There Is Nobody In Control': My Name Is Monster By Katie HaleInterview With Frances Quinn - Author Of The Smallest Man'A Hero Of Our Time!': The Smallest Man By Frances QuinnInterview: Thomas McMullan, Author Of The Last Good ManReview: The Last Good Man By Thomas McMullanInterview With Nikki Smith - Author Of All In Her Head