When we planned this series on the less well known operas, Trouble in Tahiti was one of the first shows on our list. Then the news came that Opera North was intending to use their recent production in a live streaming. It made sense to bring forward our introduction to Bernstein’s chamber opera and link it to Opera North’s performance. 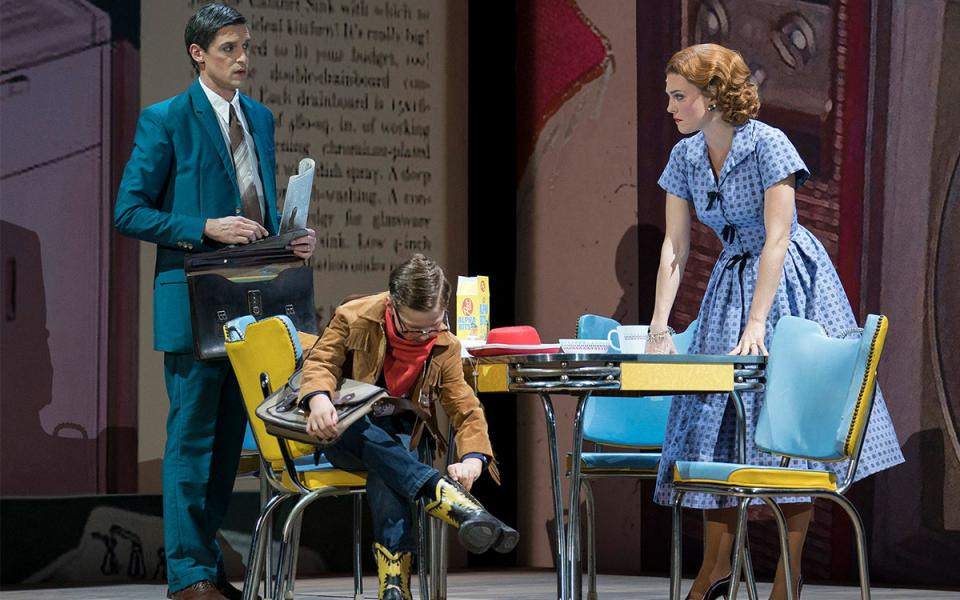 Quirijn de Lang as Sam, Charlie Southby as Junior and Wallis Giunta as Dinah. Photo by Alastair Muir
In a particularly fecund period, Bernstein became the first American to conduct an opera at La Scala; wrote the music for the Marlon Brando vehicle On the Waterfront and the scores for On the Town and the incomparable West Side Story. At the same time, he was the only rival to Herbert von Karajan for the 'number one conductor in the world' crown.

Trouble in Tahiti falls within this period (1952), but in many ways has been swamped by the magnitude of all those other achievements.

Covering the events of a single day, Trouble in Tahiti observes the classical unities of time, place and manner, and riffs on the same themes as Thornton Wilder’s Our Town (1938): love and companionship; failures of communication and lack of appreciation for what we have until it is too late.

The couple, Sam and Dinah, awake to their loveless marriage. The piece is usually played with minimal sets but Opera North goes for credible plastic fittings for the kitchen and Opera North favourite, Quirijn de Lang, appears to have taken time off from the set of Mad Men.

Wallis Giunta as his wife, Dinah, is also well served by the costume department in her A-line frocks but, good as she looks, it is the range, clarity and subtlety of her mezzo-soprano voice that does justice to Bernstein’s music and lyrics. Her singing of the aria ‘There is a Garden’ evokes that quality of silence in the audience that happens when you know you are in the presence of something very special.

The whole piece is a mere forty minutes long and Bernstein displays that talent for melody that served him so well in West Side Story.

Trouble in Tahiti is a little gem.

Opera North's 2017 production Trouble in Tahiti will be streamed on YouTube on Wednesday 6 May at 7pm. It will be available until Monday 1 June.