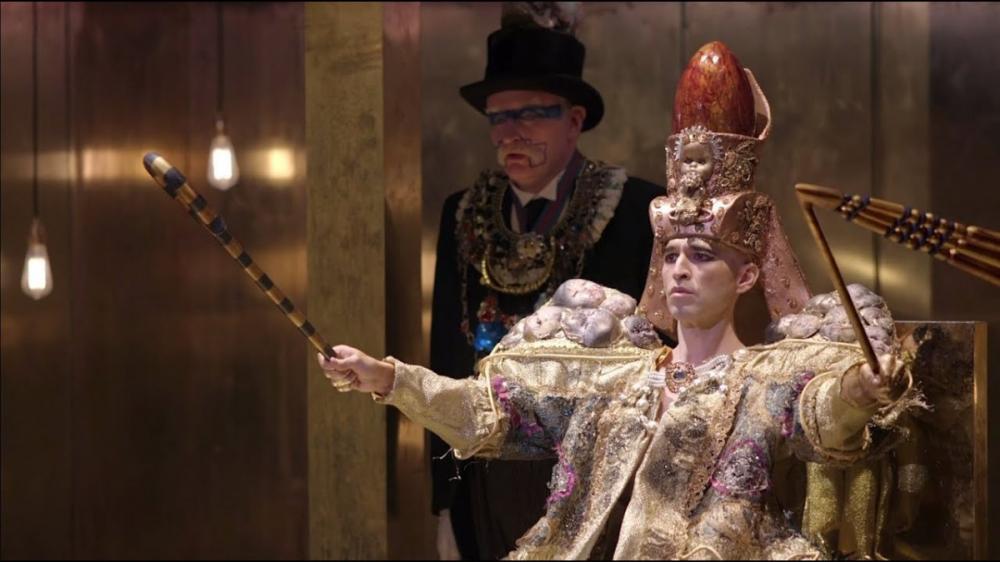 Akhnaten at the English National Opera
The choices that Philip Glass made for his ‘Portrait Trilogy’ may, on the whole, be traced to personal experience.

Since his first degree was in Mathematics and Philosophy, it comes as no surprise that he opted for the greatest mathematician of the twentieth century with Einstein on the Beach (1976).

He followed this with Satyagraha (1979), which traced the growth of Gandhi’s philosophy of non-violent protest from his time as a solicitor in South Africa. Glass’s time with Ravi Shankar and his involvement with the scores for Bollywood films were probably influential too.

But where does his interest in the tenth ruler of Eighteenth Dynasty of Egyptian Pharaohs come from?

According to Glass, all three made contributions to their times that sent ripples through the course of history.

Akhnaten pioneered the notion that a god, not gods, had oversight of people’s lives. For Akhnaten, that single god was the sun (The Aten) and he set about using his absolute power to abolish all the other gods of Egypt and making worship of the Aten the state religion.

Glass’ conception of the strangeness of Akhnaten’s life leads to anachronistic costumes; a libretto in Amharic and other languages, and the gruesome mysteries of an Egyptian burial ceremony. Meat and drink here for any set designer.

Even more exotic than the visual elements, the role of Akhnaten is scored for a counter tenor and given two striking arias: The Window of Appearances (with his wife Nefertiti, contralto) and his mother (Queen Tye, soprano) and Hymn to the Aten which Akhnaten sings alone.

I have on my shelves a book entitled Opera: The Last 400 Years (Allen Lane, 2012) by Caroline Abbate and Roger Parker. Both are Professors of Music according to the fly-leaf. Their history affords Philip Glass less than a page of recognition. I just can not help feeling that Glass is the Jack Vettriano of the opera world. He is just too damn popular to be successful with the Academy. He writes music that people want to listen to in just the same way that Vettriano paints pictures that people want to look at (there are no Vettriano paintings in any of the National Galleries).

When Akhnaten was staged recently by English National Opera, it was a sell-out success, as was Satyagraha the following year.

The works of Arnold Schoenberg receive multiple page listings in the index of Abbate and Parker’s book; Philip Glass receives one. If I was asked to open my wallet to pay for a seat, I know where I would want the cash to go.
More articles in this series...
Trouble In Tahiti - Leonard Bernstein