‘The Oak Tree Lives Inside the Acorn’: The Invention of Wings By Sue Monk Kidd

I love history, always have, tempted as I was for a long time to teach that subject rather than what became my greater love, English. I don’t believe we can change history, nor re-write it and I do believe it is important not to forget it, not least because of what we can learn from it. Anyone who says they have never made a mistake is lying; the best we can do is to try not to repeat the error and to do better in the future.

History textbooks can be dry tomes of facts, figures and interminable dates, often with grim black and white images. (Or am I showing my age in remembering the schoolbooks we were given?). It takes imagination to bring events to life and Sue Monk Kidd’s compelling novel The Invention of Wings does just that. This historical fiction is based on the lives of the leading American abolitionist sisters, Sarah and Angelina (Nina) Grimké. Kidd successfully blends fact and fiction and breathes life into her characters, adding the fictional figure of Hetty, the slave given to Sarah on her 11th birthday. The novel spans a hundred and thirty-five years and describes events leading up to 1938.

The Grimkés are a prominent, wealthy white family and their daughters are ‘ladies of piety and gentility’, but two of them eventually become exiles from their hometown. The Grimkés have a household of slaves, as was the custom at the time, but one of the daughters, Sarah, struggles to justify slavery and she befriends the slave named Hetty who is presented to her as a birthday gift.

At a time and in a place where ‘owning people was as natural as breathing’, Sarah feels it is very far from ‘natural’ and is appalled at the idea that one person can own another. She fights the notion of slavery by teaching Handful to read and promising one day to free her. Hetty was nicknamed Handful at birth by her mother, because she was ‘born too soon’. Little did she realise what an appropriate nickname it would be.

Divided into six parts, the novel is set, primarily in America’s deep south, Charleston to be precise, in the early part of the nineteenth century. Kidd provides brutal detail of the treatment of slaves: the curfews, the searches, the slave catchers, the lashes, the cane, the treadmill in the workhouse and, as suffered by Charlotte, Handful’s mother, being forced to stand with one leg tied up behind her and attached to her neck. If her leg relaxes, she will throttle herself. Members of the Guard show no leniency for recalcitrant slaves and sneer openly at the Quaker abolitionists – whoever they may be. They remind us how intolerant the human race can be. 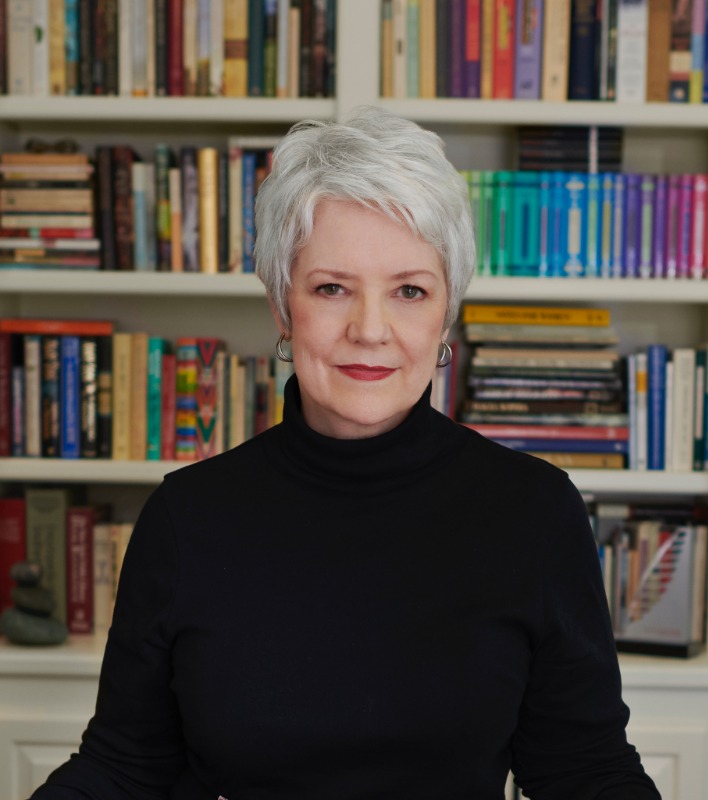 Sue Monk Kidd
Kidd provides two viewpoints by alternating the chapters between the first-person voices of Sarah and Handful, as their relationship develops and their lives hit highs and lows. They share a heartfelt yearning for equality and Kidd does not just mean racial equality, she includes gender equality - It’s about women too. Sarah feels powerless as a woman, when even her father, whom she loves and respects, publicly ridicules her ambition to be a jurist like her brother. A woman entering the bar! Preposterous. He denies her the right even to enter his library, let alone read his books. Despite his deathbed apology, this is a torment she finds hard to forgive, even for a dying man. She is also punished for teaching Hetty to read which is against the law, an echo of the factory owners who denied their workers an education in this country, for fear that knowing how to read and write might empower them to rise up and question the rule of the rich. Power and wealth are inextricably linked and fiercely protected.

In time, Sarah becomes a Quaker, much against her mother’s wishes, and moves to Philadelphia, where she meets Israel Morris. She discovers the strength to fight injustice as she sees it and in doing so, realises her place in this world - but she must forego love because it seems a woman cannot have it all. Her sister, Nina, joins her and together they become the first female anti-slavery agents in America.

Both Sarah and Handful want freedom - Sarah to be free to choose her own vocation, and Handful to be a free person, not owned by anyone. She also wants to find her mother who vanished without trace. This novel gives a voice to pain. Handful's ‘slave tongue’ dialect is defiant and filled with hurt. In Charleston, there is a rebellion planned by the slaves and led by the free black man, Denmark Vesey; success or failure at this point is of no matter - the stage is set and one day, the slave voice will be heard.

Sarah has struggled with speech ever since she witnessed the harsh punishment of a slave when she was a young child. Having developed a speech impediment, she fights to find her voice, both literally and metaphorically, to speak out in favour of abolition and to find her wings in order to escape the limits which fettered women at this time.

When I start writing a review like this, I often choose a quote from the novel as my title. There is usually one which stands out but as I turned these pages, so many quotes presented themselves: ‘Press on my sisters’, ‘Female Incendiaries’, ‘Kindly take your feet off our necks’, ‘She never belong to nobody but herself’ and my favourite, which I decided was perhaps too long, ‘You got to figure out which end of the needle you gone be on, the one that’s fastened to the thread or the one that pierces the cloth’. The Grimké sisters did not have any doubt and had certainly been ‘boiled down to a good strong broth’ in order ‘to turn the Puritan world on its head’.


Also by Artis-Ann ...
The Tinnitus Of Grief: A Narrow Door By Joanne Harris‘You Have To Take Your Chances When You Can’: The Great Frost By Chris Speck‘Hiding Away From The World Never Works, Because You Still Have To Meet Yourself In The Mirror Every Morning': the Seven Sisters By Lucinda Riley‘Don’t Be Scared If It Hurts, Healing Always Hurts’ Bea’s Witch By Daniel Ingram-brownReview: Sarah The Spectacular Squirrel By Rory Ffoulkes, Illustrated By Irene Silvino
Kidd has provided a window through which to witness past events - albeit with some artistic licence which is explained in the comprehensive ‘author’s note’ at the end. She highlights the courage of those who fight for what is right. Some historical novels are laden with details which get in the way of the story, but not here. Kidd seamlessly places her characters in context and allows them to reveal themselves to us. The novelist makes the point that the Grimké sisters are not well known, despite their fight to bring an end to one of America's greatest iniquities, withstanding the condemnation they received from both friends and family. It is a powerful commentary on humanity and of lessons we all should learn.


The Invention of Wings is published by Tinder Press