Troubled Blood is the fifth novel in the Strike series by Robert Galbraith – aka J.K. Rowling – and it is the first cold case that the protagonists have investigated, looking into the disappearance of a GP forty years previously. The previous books in the series have been solid, if not top rank, whodunnit mysteries, with an element of danger and a sparky, will-they-wont-they relationship between the two main characters, Cormoran Strike and Robin Ellacott. Such an incendiary conjunction of characters makes the series an enjoyable read. Ellacott’s fiancé / husband (they marry in the fourth book) is unspeakably awful, and it is the ongoing fractiousness between the two, alongside Ellacott’s attraction to Strike, that lend Strike an edge.

Unfortunately, the new novel loses much of what made the previous books enjoyable. With Ellacott divorcing her husband, there is little of the ongoing tension that used to be present. Meanwhile, with Strike himself being unremittingly rude and unpleasant throughout the book, it is increasingly hard to believe that Ellacott finds him attractive at all; indeed, a psychological reading might suggest that it is her detective work that she loves, and not the man who introduced her to it. Strike’s manipulative ex-girlfriend, Charlotte, also makes her usual appearances at various points, but she is a character that it is hard to care about. Although Galbraith ups the sexual tension between Ellacott and Strike at one point, we know that nothing can ever truly develop as it would destroy the dynamic.

There is also little sense of danger or urgency in the book – aside from the introduction of a small-time mafioso – but that may be inevitable when dealing with events of forty years ago, when most of the key people involved are in their 70s or dead already.

The story focuses on Strike and Ellacott’s attempts to find out what happened on the day the GP disappeared. The GP, Margot Bamborough, walked out of her surgery one evening on her way to meet a friend at the pub and was never seen again. Did she have enemies at the GP surgery? Was she the victim of a random abduction? Did her husband do away with her so that he could safely take up a relationship with their child’s nanny? Who was the mysterious final patient she saw on the day she vanished? It’s a decent enough story, with a satisfying – if relatively unbelievable – resolution.

The main problem with the book, though, is the length. Rowling’s Harry Potter books deteriorated in quality towards the end of the series as they increased in size, culminating in the depressingly long Deathly Hallows (or Harry Potter and the Interminable Camping Trip), and the same problem is evident here. Troubled Blood is well over nine hundred pages long. At half that length, or less, it may have made for a good read, but there are hundreds of pages where nothing very much happens. The story takes place over the course of a year and it almost feels like Galbraith is portraying it in real time. Long-winded interviews are recounted about the events of forty years ago, often with little emerging from them that is important, or which seems like a relevant clue. We are almost eight hundred pages in before some of the key interviews take place. Meanwhile, other cases that the detective agency is working on are continually brought in, leading to additional names and characters to try to keep track of, none of which are ultimately of any importance to the main storyline. The previous police investigation was led by a man obsessed with astrology, and his notebooks are filled with misleading nonsense about which star signs various characters belonged to. Sadly, we are also obliged to wade through these red herrings, which Strike and Ellacott would surely never have taken remotely seriously. Strike also undertakes numerous visits to his terminally ill aunt, meaning that large swathes of text are devoted to background information, whose only real purpose is to explain why Strike is in such an unhappy and angry mood for much of the time. With almost any other author, I am sure that an editor would have insisted on wholesale cuts. 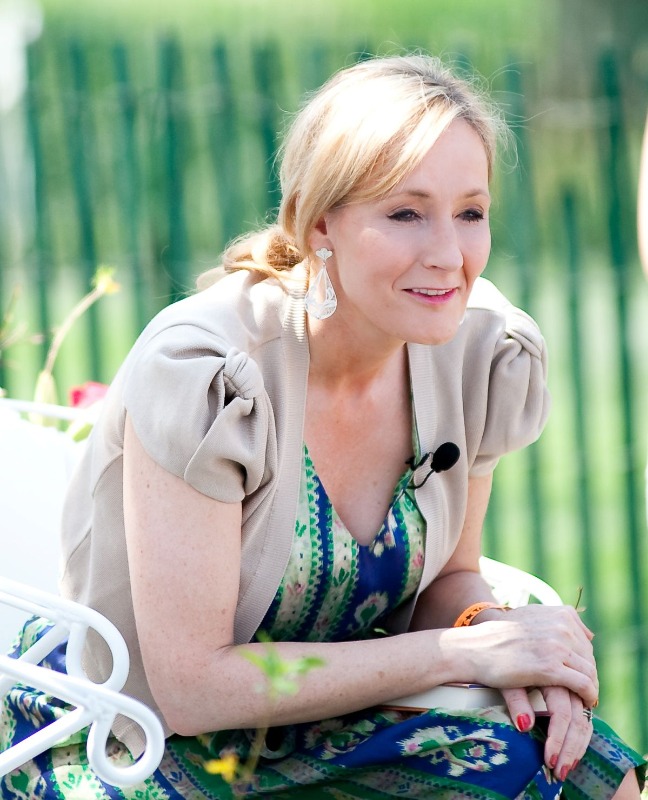 J. K. Rowling in 2010
When the book was first published, there was some controversy over the portrayal of the character of Dennis Creed, a serial killer who was the main suspect for the doctor’s disappearance and is now locked up in Broadmoor. Rowling was accused of transphobia for portraying Creed apparently dressing in women’s clothing when seeking out his victims, leading to a large backlash when taken in light of certain other comments she had made on social media. Others defended her, saying that Creed was not, in fact, shown as cross-dressing, and that the controversy was based on one throwaway comment about him wearing a women’s coat. This latter defence does not stand up to a full reading, as there are numerous occasions when Creed’s habit of wearing women’s clothes is mentioned, and a clear implication that Creed was known for cross-dressing: Robin Ellacott in fact says at one point, “He said he’d bought it [some jewellery] because he liked to cross-dress”. When, towards the end of the book, Strike finally interviews Creed, Creed even admits to dressing and acting effeminately to be less of an obvious threat to his victims: “In a wig, a bit of lipstick…they think you’re harmless, odd…maybe queer”. I do not have a strong opinion on whether any of this makes Rowling transphobic, but it is certainly a bit lazy and unnecessary and plays into a stereotype. Personally, I found the portrayal of two learning-disabled characters far more problematic and disquieting, as their disabilities define their entire persona, and once again it is lazy and stereotyped, but in a more offensive way.


Also by Roger Winterbottom...
Review: Runaway's River By Kevin Wood
Another jarring element is the use of accents for certain characters, with an Irish character’s speech liberally scattered with phrases such as “I t’ought”, “women like dat” and “the best t’ing”. Meanwhile a working class character is almost unreadable, with sentences such as “I fink ‘e pretended to ‘imself ‘e didn’t”. I can’t imagine why Galbraith/Rowling chose to do this for only certain characters; why, for the sake of continuity, is Ellacott’s speech not rendered in her Yorkshire accent? Again, it feels like lazy stereotyping and adds nothing to characterisation. It is also strange that male and female characters seem to be treated differently throughout the book in terms of their naming. Males are usually referred to by their surnames: Strike, Barclay, Creed, Douthwaite; while females appear to be generally called by their forenames: Robin, Janice, Irene, Gloria. It’s a minor point, but it feels odd and inconsistent.

Troubled Blood is still a readable cold-case thriller, and Galbraith/Rowling remains capable of clever plotting and characterisation, but the book is simply too long and unfocused. There is too much padding, with the storyline often feeling like it is meandering. It is rumoured that there are another ten Strike books lined up for the series. I can only hope that the editorial team learns to stand up to the author more if only to help her regain her earlier focus.

Troubled Blood is published by Sphere