Runaway’s River, the second book in the “Runaway” series by Skipton author, Kevin Wood, is another fast-paced, gripping adventure story for older children and young adults. The first in the series, Runaway’s Railway, introduced us to an alternative world of interlinked transport systems in which the teenage hero, Mark, suddenly finds himself as he flees his home.

The books are founded upon an intriguing premise, that parallel transport worlds exist alongside the real world, and people can find themselves drawn into those worlds when the need arises. Each world has a number of Avatars, or Archetypes, representing key characters that the system requires:

If one of the Avatars left, the transport system would automatically pull in a replacement. It needed Avatars; they were what defined it and gave it life.

In the Railway world which Mark enters, for example, there are Avatars for a Navvy, an Engineer, a Signalman, and so on, with each representing the embodiment of their role - Mark is the “Runaway” Avatar. It is a neat idea and allows the author to use the characters playfully; it does not appear clichéd when the Railway Baron’s daughter is tied to a railway track as a train speeds towards her, with Mark frantically trying to free her. Rather, it is exactly what ought to happen.

The transport systems themselves function like neural networks, with a life and intelligence of their own, as Wood explains:

“I first had the idea for Runaway’s Railway while waiting for the train one January morning. It was still dark, there was snow on the ground, I had just discovered that my shoes were not waterproof, and the train was delayed. As I was waiting in misery, my mind entered a kind of fugue state, and the trains transformed from beasts of steel into messengers, carrying information around in the form of passengers and goods. That was when I first asked myself if the railway might be alive in some way, with trains acting like the electrical impulses in the brain". 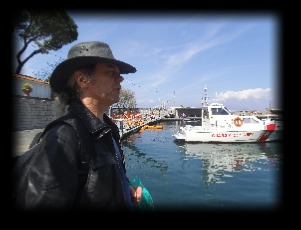 Kevin Wood
With this fascinating idea for a background world, Wood has delivered another high-speed adventure in Runaway’s River, with many chapters ending on moments of peril that keep the reader hooked and the story driving forward. Having saved the Railway in the first book, Mark has now become apprenticed to the Board of Transport, an organisation which aims to keep all the different transport worlds running smoothly and in balance.He is assigned to assist his friend Helen, whom we also first met on the Railway, in resolving a territorial dispute between the worlds of the Sea and the Waterways. In no time at all, he and Helen have survived a bombing assassination attempt and have become embroiled in a frantic race to prevent a war breaking out.


Also by Roger Winterbottom...
Review: Troubled Blood By Robert Galbraith
The story is part adventure, part mystery, as Mark and Helen try to discover who is behind the ongoing series of bombings and attacks that threaten to escalate into a war. In contrast with Runaway’s Railway, Wood introduces fewer Avatars in Runaway’s River, with the main one being the Aviator, who has all the characteristics of a 1930s flying ace – but there is a nagging suspicion that he is not all he seems.

Wood’s writing has become more confident and assured in Runaway’s River, with some wry humour sprinkled throughout the book:

“All it needs is one idiot convinced that their vision for the future of the Waterways will bring about Utopia. Then what are the lives of a few people, sacrificed for the betterment of the rest?”

With numerous bombings and military attacks in the story leading to lives being lost, the reader cannot help but be left with a suspicion over the authenticity of the transport worlds: how ‘real’ are the people who are not Avatars, who are more like shadows of people in comparison? No doubt we will uncover the truth of the alternative worlds in the third and final instalment, just as we hope to find out more of Mark’s background and what it is he is running away from. But for now, Runaway’s River is a fine sequel that is well worth a read for young adults who enjoy high-tempo adventure stories.