‘Very Few Of US Are What We Seem’: The Supper Club Murders By Victoria Dowd 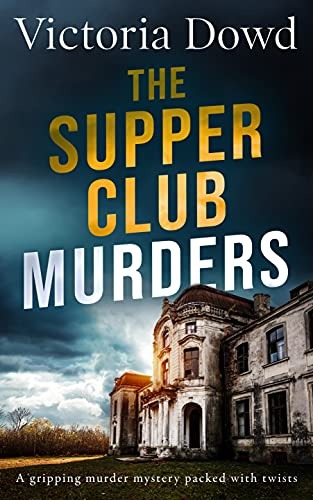 The words of Agatha Christie purloined from the Queen of Crime’s, The Man in the Mist seem both apposite and minatory when considering the marvellously macabre, Gothically spiced crime novels given to us by Victoria Dowd. Wickedly amusing badinage ricocheting between the less than convivial members of our familiar mishpocha, evince Dowd’s affection for Oscar Wilde. Add to this consummate employment of tropes considered to be the desiderata of the hallowed murder mystery genre, and we begin to appreciate Dowd’s dextrous, mischievously playful talent.

Her affinity for rich gothic symbolism and eldritch ambience, twinned with lyrical descriptive prose echoing that of Wilkie Collins, almost guarantees her readers a damn fine jolly jape, and a scintillatingly sinister tango with her protagonists and the macabre forces stalking them.

The Supper Club Murders is the third book in Dowd’s Smart Women trilogy, the previous two novels reviewed by myself for our readers. Whilst many aspects of the earlier novels perennate successfully, the joy of Dowd’s latest work lies in the unbridled fun the author has clearly enjoyed in its making. Dowd consolidates well honed skills; however it’s the unfettered, effervescent deployment of these attributes which makes her third novel an absolute tour de force.

The third outing for the Smart Women sees them imprudently accepting an invitation to visit an ex-book club member now incongruously ennobled, and the enigmatic denizen of Black Towers, a Norman castle ominously overshadowing the ostensibly quaint rural idyll of Greystones. Dartmoor provides the dramatic, if atmospherically antagonistic, backdrop to the novel’s events, as does the incessant gelid rain threatening to cut the village off from wider society.

Our protagonists have survived two previous such gatherings, each of which saw them sleuth their way to safety despite the nefarious intentions of unidentified killers in their midst. They remain alive, yet magnetically drawn to murderous mayhem !

Pandora, or dangerously less formally ‘Mother’, is accompanied by her sensitive, psychologically unstable daughter Ursula with dauntless, but hilariously clueless Aunt Charlotte completing the Smart set. Pandora’s estranged best friend Mirabelle, now suspiciously morosely demure having once been the epitome of asperity itself, is joined by the ever splenetic and superciliously saturnine Bridget. Our chief protagonists are the guests of our ersatz nobles, Lord and Lady Black. Festivities include a ‘supper safari’ in which our motley crew visit the ever more odd dwellings of the local villagers sampling a single dinner course, before heading off for the next dubious culinary offering.

Lord Black, a debauchee and ruthlessly rapacious entrepreneur with a penchant for declamatory bile, appears to be the regnant local force. Viscerally allergic to his wife Marsha, who wears the contrived froideur of a woman concealing inner turmoil, the faux aristocrats seem to be as phony as the bucolic harmony worn like a kabuki mask by the cloistered hamlet and its denizens.

The villagers are no less colourful. We meet a failed magician-cum-pseudosopher cursed by inveterate incompetence and the weight of his grubby failings, and a pair of pagans garbed in billowing black cloaks and the bloviated lexicon of new age mysticism. Two elderly maidens straight from the frame of American Gothic are joined by a taciturn, brooding farmer, a rebellious teenage girl and married pair of historians almost as bizarre as the medieval accoutrement they fetishise.

A libidinous young handyman with a penchant for married women and an apostate, vodka swilling reverend sharing the same vice are joined by Lord black’s crippled sister Verity, a welcome note of normality and decency counterpointing the whiff of pernicious intent saturating the rest of our untrustworthy players.

With such a gloriously idiosyncratic cast of characters, tangible mutual malevolence simmering beneath the surface of contrived cordiality, and meteorological conditions befitting a sodden, flood threatened horror movie, what could possibly go wrong? The first of several grisly murders would seem to suggest rather a lot ! 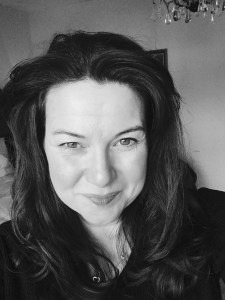 Victoria Dowd
As with her first two books, Dowd has scrupulously observed the architectonics demanded by the murder mystery genre. Red herrings, plot twists and clues disguised as picayune trivialities are decanted with elan. Returning to the roots of the Gothic novel per se, she has taken tried and tested props from Horace Walpole’s The Castle of Otranto (1764), and seminal elements from the psychologically creepy works of Anne Radcliffe, to create a chilling Gothic ambience perfectly suited to the grim deeds of her nefarious, but plaintive murderer.

We have a dilapidated castle complete with bloodstained priest holes, a ruined graveyard groaning under the enduring burden of its untended tombstones, grotesque implements of medieval torture, a ghost and the omnipresent miasma of imminent threat suffusing the novel’s pages as effectively as relentlessly savage elemental forces have saturated the forbidding landscape and benighted locals.

Dowd even draws upon Edgar Allen Poe to grace her novel with Gothic prosopopoeia, though a rook replaces a raven – ‘A rook called out from the bare bones of the tree overhanging the church wall. The branches were all bent in sufferance from the constant wind, leaning away from the church. The bird watched us with his smooth pebble eyes before lifting up on the wind in a splash of wings. It wheeled above us then disappeared like smoke’.

Our tale is told by way of Ursula’s first-person narrative, itself a bravura use of the unreliable narrator technique. Echoing Cassandra from Greek myth, Ursula is seldom believed as she painfully connects the pieces of a particularly gruesome puzzle. Her opinions are somewhat dubitable given her fractured psyche, proclivity for conversations with inanimate spirits, fainting spells and reliance upon a concealed brandy supply to bolster her beleaguered mind and unvoiced grief. We search for the killer through the deformed cynosure of Ursula’s tortured cognitive faculties, amplifying our own sense of dread as we remember Christie’s words from Death Comes as the End – ‘Fear is incomplete knowledge’.

As with the previous two books in the trilogy, Character rendition is nothing short of blissful. Those who have read the previous two novels will once again delight in their favourite character’s foibles and this familiarity with the cast is in no way deleterious to the novel’s propensity to shock and surprise its readers. Those meeting ‘Mother’ and her bizarre entourage for the first time are in for a treat. Cluedo is no less enjoyable for our familiarity with its cast, a fact playfully exploited by Dowd in that each of her own players takes their name from this iconic game of murderous detection.

For those interested in doing so, just as the novel’s castle has many concealed chambers lurking within its wall and beneath its well-trodden flagstones, Dowd’s choice of names for each and every one of her characters has literary significance. I found this aspect of her novel to be rich in allusive texture and almost a puzzle within a puzzle!

Fusing a story line that romps along with gusto and Gothically nuanced gore, with a meticulously calibrated Whodunnit plot is only part of Dowd’s authorial legerdemain. Humour salts the novel’s blood-soaked rump, lending it deliciously jarring whimsy counterpointing palpable, if occasionally bathos-imbued tension. My favourite ribald line caused me to shower myself in hot tea as it landed upon my engrossed, but defeated powers of deduction: ‘I cant feel her in my astral hole’!

Dowd drapes her story in descriptive prose which, though delicately modulated, threads purple skeins through vibrantly scarlet fabric, making it the more lustrous and satisfyingly colourful. As with Wilkie Collins, Dowd knows that setting the scene with visceral, carefully articulated verisimilitude is the desideratum of successful diegesis, and she has utilised her eloquence with potent aplomb:

‘ I stood up and walked to the window, the world warped by the thick bottle-bottom glass slick with winter grime. Curves of light hung under the low clouds. Grey layers of rain were still being driven over the far off moors. There was no sun waiting on the edge, just a line of cold light behind the rain. I looked down into the courtyard. The grim daylight picked out the slippery cobbles, water trickling in crooked streams all meeting down there at the gatehouse’.

Exuberance has caused a few minor faults. The repetition of ‘rain’ as with ‘snow’ in her first novel slaps Chekhov’s mantra to ‘show, not tell’ in the face rather conspicuously on occasion. Aunt Charlotte, whilst my favourite character, is rolled out as the stock pantomime donkey laboriously carrying one too many one-liners for my taste.


Also by Paul Spalding-Mulcock...
‘Writer, Maverick, Iconoclast, Visionary’: The Young H.G Wells, Changing The World By Claire TomalinContemporary Art, With An Ancient Past: Interview With Matt Leak – Mosaics Artist'The World Of Reality Has Its Limits; The World Of Imagination Is Boundless' : Interview With Kate LycettInterview With Chris M. L. BurleighCézanne – Muse, Guide And Maestro: Interview With Phil Fraser – Watercolour Artist
The ‘locked room’ enigma at the centre of the novel is plausibly constructed, but unlikely to withstand close scrutiny if forensically examined. Ursula’s father as a ghostly apparition is frequently overplayed and the relationship between mother and daughter, such a sine qua non to the first two books, is noticeably diluted by the panoply of characters Dowd pulls out of her toy box. None of these faults matter, for they spoil nothing and simply imply that verve has occasionally surmounted the restraining forces of editorial judgment.

So, Dowd’s third book is an utter delight likely to garner the approbation of old and new fans alike. Entertaining, playful, uproariously amusing and never less than absorbingly intriguing, The Supper Club Murders has wetted my eager appetite for the next course in Dowd’s as yet unpublished feast of delights !


The Supper Club Murders is published by Joffe Books.