Truth And Prayer: The Day That Didn't Happen By Gerd Kvanvig 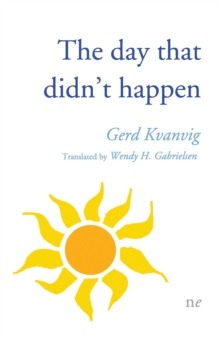 The striking lyricism of Gerd Kvanvig’s labyrinthine psychological tale, The Day that Didn’t Happen, loses nothing in translation. First published in Norwegian in 2000, her complex story of a young girl’s defining experience is conceived with impressionistic elan, as though to mould hindsight and the sensual immediacy of the present into one serviceable form. Rendered in the first-person through the eyes of the story’s narrator and protagonist, the reader is witness to a broken mosaic of memory as it is painfully re-assembled. And Wendy H. Gabrielsen’s translation, in this new offering from Naked Eye, sharpens the girl, Margrete’s, polysemic collation of images on a whetstone of authenticity, lending ambiguity to suggestion, and latitude to anxieties which are lost, to some degree, in the cultural hinterland of Oslo and its environs.

But the psychodrama is Kvanvig’s own. And if we are tempted to fall into the trap of stereotype and to conclude that the televisual qualities of the story are Scandi-Noir, then we are disabused of any prejudice early on: certainly dark, definitely claustrophobic, the writer’s touch is hyper-attuned to nuance, and to the effects of a shocking experience on the juvenile mind, and it is in the establishment of entirely plausible characterisation that she gets beyond regional idiosyncrasy to a wider plane of recognition.


Beautifully construed, no more so than in the quiet dignity of the relationship between the investigating policeman, Erling, and Margrete, the reader becomes a witness to weakness, to vulnerability
Many angled and fragmentary, constructed in ad hoc, negotiated passages, Kvanvig’s narrative builds gradually and with small releases of revelation, mirroring the child’s own striving to come to an accord with the knives of experience. At first ill-defined, as if she were caught in a misty and indeterminate wasteland, Margrete’s finding of a place in her own story is undirected: other figures are shadows, powerless to impact upon her vortex of understanding – the absent father, the marginal mother, the satellite school friends. The palimpsest of an older Margrete, who stabilizes the narrative’s nascent hubris into a form of eloquence, does so by reining in the excesses of her earlier self with corrective insight, or giving vent to expression in gorgeously resonant metaphors that precisely nail an inexorable darkening of mood:

I sank more and more. Sat outside waiting – and deep inside the banality of everyday existence a black orchid was being carefully digested.


Rendered in the first-person through the eyes of the story’s narrator and protagonist, the reader is witness to a broken mosaic of memory as it is painfully re-assembled.
For this is a book about gathering intuition, an inverse bildungsroman where the protagonist has to work her way backwards through a thicket of imagistic contradiction to recalibrate a sense of purpose from the shadows. The defining event of the twelve-year-old Margrete’s life has unfolded in a circus tent on the margins of the town in which she lives in the mid-nineteen seventies, and Kvanvig’s skilled drip-feeding of suggestive details as to an act of abuse proceeds in precise accordance with the girl’s gradual reconstruction of the moment, and the multivalent emotional drama of anger, guilt and acceptance that is a consequence of it.

Beautifully construed, no more so than in the quiet dignity of the relationship between the investigating policeman, Erling, and Margrete, the reader becomes a witness to weakness, to vulnerability and eventually to a kind of redemption through love. Dissociative, in places tentative, Kvanvig’s narrative explores Margrete’s experiential journey in sensual conflation, as a child might:

It was raining. Erling had a window open. It smelt of rain in his sitting room. It smelt of cold rain. It smelt of the circus. And a place where I always cried. A tent was always filled with an ice-cold tear, keeping something dry …

The sawdust reeked of rotting apples and fermentation, of wine and bright lights, with a sharp edge of holy wrath.

Gerd Kvanvig’s unusual and profoundly engaging enquiry into the interior life of a young girl may or may not bear an autobiographical component, but her narrator’s final act of communion yields a fitting coda to the ‘double-edged peace’ of history uncovered:

It’s still possible to keep what happened outside new rooms of reality … And it makes me stay young, with the possibility of continuing. It’s as though – if I say it, I relinquish this weight that defines me, that keeps me soft and alive.