‘The Grit In All Of Us. Every Writer’s Ideal Material’: Red Sky At Noon By Simon Sebag Montefiore

Having read the first two novels in Montefiore’s ‘Moscow Trilogy’ some time ago, I have at last come to the third. Chronologically, it sits in the middle and while it can be read as a standalone novel, it reconnects with some of the old names and we meet once again, in particular, the Jewish writer, Benya Golden.

Saved from the death penalty, he has been sentenced to twenty-five years’ imprisonment in the ‘netherworld’ of the Gulags, for a crime he did not commit. It is the darkest time of the Second World War – the summer of 1942 - and Benya is allowed to escape hard labour in the Siberian gold mines by enrolling in a penal battalion of the Russian cavalry, along with the murderers, rapists and others of the murky criminal fraternity. Golden is misplaced in his new situation, being a Jew, a political prisoner, and a city boy, but he learns how to ride and how to fight with his Cossack comrades. He is transformed from being a softly-spoken, erudite and physically weak man into something of a brave heart on the battlefield.

During the battle between Russian forces and the power-hungry Nazis, Benya and his comrades are sent behind enemy lines to hold up the German advance on Stalingrad with the promise that success carries with it a chance of redemption. Despite Stalin and his advisors actually believing this is a suicide mission, Benya and his band of brothers succeed, against all the odds. Survival never having been planned for, however, they have orders to take ‘never one step back’ and have to choose their own new objective - the killing of traitors. There are some memorable villains and what Benya witnesses is horror beyond belief. The image which stays with me, especially, is the work of the farrier - but you’ll have to read the novel to see what I mean. 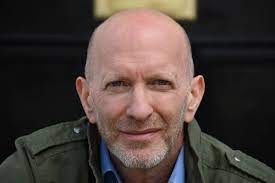 Simon Sebag Montefiore
The authenticity of the writing is powerful as, once again, Montefiore employs his unarguable knowledge of Russian history to create visceral battle scenes and the soundtrack which accompanies them. He has an empathy for his characters who know that ‘any stray bullet at the front could kill [them] tomorrow’. Simple pleasures are seized and enjoyed with heartfelt emotion: the taste of honey, the sight of sunflowers. So, too, the chance for love, and romance finds its way into this harsh world.

The narrative covers ten days, although it could have been much longer, and not only switches between the front line (on the grasslands of southern Russia) and Stalin’s palace, but also between moments of tenderness and friendship, betrayal and stark brutality where Benya, a writer not a soldier, has to learn to kill.

Two love stories blossom against the backdrop of violence and death. The first, between Benya and a recently widowed Italian nurse, is sensitive and moving as they seize their chance for love on the battlefield: ‘when every second is so rich, so priceless, so deep…that every minute counts fivefold, tenfold [and] sometimes one night is a lifetime’. Their ‘somehow forever’ love is all too short but for these ‘bandits’, it is all too real.

The second is ‘a crazy quixotic affair’ between ‘the loneliest girl in Russia’, Stalin’s sixteen-year-old daughter, who is in love with the idea of love, and Lev Shapiro, a romantic, married war reporter. Svetlana’s ‘solemn passion’ reflects her age and innocence and their bond lacks the maturity of the affair between Benya and Fabiana. Understandably, it doesn’t end well for one of them at least, but Lev ultimately tells his lioness to ‘live your life as if I will never return but not as if you never knew me’.

A third touching relationship unfolds between Benya and Silver Socks, the horse he rides into war. They become each other’s strength in violent times and time and again, illustrate the deep attachment which exists between animal and man, especially ‘as they crossed the river in one last battle’.


Also by Artis-Ann ...
Review: Her Last Promise By Kathryn Hughes‘So Many Dead In The Ashes’ : Dust Off The Bones by Paul HowarthMelody Of Peace: The Electric By Tim MurgatroydHe Knows I Know He Knows: Cradle Song By Robert EdricThe Best And The Absolute Worst: The Dressmaker’s Secret By Lorna Cook
Despite occasionally wanting to hide my eyes in the face of graphic description, I was drawn into the moment and really didn’t want to put this novel down. No real Russian tale is complete without a station scene so do read to the end, for a poignancy which pulls at the heart strings.

The author’s note is interesting and explains how Montefiore successfully intertwines fiction with actual historical events. The depth of his research, which makes the novel a very plausible read, gives it an authenticity which cannot be denied.


Red Sky at Noon is published by Arrow Books