The Voice Of The Lion: The Attic Child By Lola Jaye 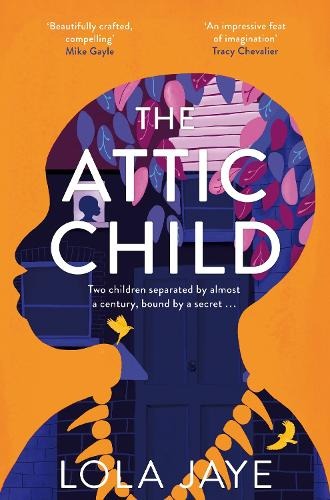 Forgotten histories! Today, much is made of the past, often about the atrocities perpetrated by colonialists. These stories should never be ignored or forgotten although times were different, expectations were different and actions which are thought abhorrent today, were accepted as normal. We cannot change history and should not try to rewrite it but it is my belief that we should learn from these stories and ensure that such maltreatment, such behaviour, is not repeated. The end of The Attic Child sees the opening of The Exhibition of Forgotten Histories which centres on the life of Dikembe Kabili, a young Congolese boy, taken from his family and brought to England by a man ‘who meant well’. In fact, the novel is based on the short real life of Ndugu M'Hali, a young African boy taken from his homeland, against his will, to be a 'companion' to the explorer, Henry Morton Stanley.

The touching story is told from two parallel perspectives, those of Lowra and Dikembe, or Celestine as he is renamed. Both were trapped in the same attic in Ranklin Road, decades apart, punished by equally cruel guardians, but they are connected by a shared secret.


We cannot change history and should not try to rewrite it but it is my belief that we should learn from these stories and ensure that such maltreatment, such behaviour, is not repeated.
The book is set over multiple time periods, beginning in 1903, but any confusion is eased by clear chapter headings which make the narrative, which jumps frequently, easy enough to follow.

Dikembe’s mother thought she was doing the right thing by her child, giving him a chance that life in the Congo would never afford. Sir Richard wanted to help a poor savage and show people at home in England, that children such as these were nothing to fear, that they were not ‘beasts’. Although Dikembe was unaware of it, his mother was also protecting him from the atrocities imposed on their village by the Leopold Regime, when Belgian forces brutalised the indigenous people. Their cruelty and depravity were terrible and the Author’s Note makes sombre reading. Jaye does not include graphic detail gratuitously, but her discreet references are enough to leave the reader in no doubt of the wrongdoing.


The touching story is told from two parallel perspectives,
Dikembe might have been too young to understand his mother’s actions and her attempts to protect him, but he was not too young to feel the pain of separation from his family and to question ‘the better life’ he is given in England, under a new name, Celestine.

Sir Richard Babbington is a highly regarded author and explorer who means well; he dresses Celestine in fine clothes and sends him to the best school, where he is an object of curiosity to boys who seem to lack the manners which should be inbred. Babbington treats Celestine as his companion and teaches him to be a gentleman, but Babbington is also profligate with money and enjoys whisky rather too much. His best intentions come to nothing when he meets his maker a little too soon. Celestine is left to the mercies of Babbington’s heirs which means a very different life, one of a servant, imprisoned for much of the time in the attic of 109, Ranklin Road.


These two items she found by chance under the floorboards: a beaded claw necklace and a china doll.
The narrative jumps to 1993 and focusses on Lowra, an orphan who has never come to terms with the loss of her parents and who was relentlessly abused by her stepmother. She, too, was imprisoned in the same attic until she managed to run away. A damaged young woman, she sees life as a mere existence and looks forward to the end of it. Lowra’s story poses more questions for the reader who is driven to turn the page.

When she suddenly inherits the old house, Lowra is transported back to the horrors she experienced there but takes the opportunity to revisit the attic to retrieve two items which gave her comfort. These two items she found by chance under the floorboards: a beaded claw necklace and a china doll. There were also three pieces of paper and a pen. All clues to a puzzle. Oddly, she believes that if she can find the owner of the doll, she may also find some peace of mind for herself.

Her search leads her to a museum and there, in a photograph, Lowra recognises the beaded claw necklace. It is round the neck of a young black boy and she is transfixed by the expression on the child’s face. Determined to find out all she can about the boy, her search introduces her to Monty, an historian, who is as keen to unearth the story as she is, and the two use all the resources they can access to make the search together.


this is one of the novel’s messages: we should all walk a mile in another’s shoes before judging them
.Celestine’s story is slowly revealed, as is Lowra’s, and a connection emerges which the reader could not have predicted. Despite the trials and tribulations Celestine endured, the ending is heartwarming and full of hope.

The Attic Child is about identity and belonging. Lowra’s boss ‘insists on mispronouncing her name’ - just one brief example illustrating that her identity is not important to him. Sir Richard renamed Dikembe, robbing him of his identity, too. These two need to find their own identity if they are ever to feel whole. The novel is also about the power of love and loss, about family and secrets, and about survival and making the best of whatever life throws at you, finding inner strength and the will to go on even when hope seems impossible. It is about coming to terms with the past and making peace with it.

Monty also has his demons and tells Lowra at one point that she should ‘walk a mile in [his] shoes’. Lowra wants to repeat the words back to him and it occurred to me that, although not original, this is one of the novel’s messages: we should all walk a mile in another’s shoes before judging them.

The Attic Child is published by Pan Books