The Tinnitus Of Grief: A Narrow Door By Joanne Harris 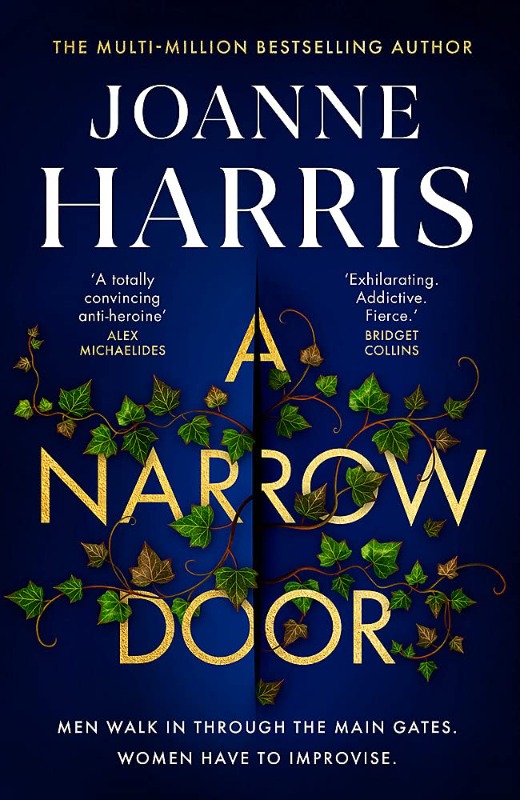 This novel is the last in the Malbry trilogy but may be read as a standalone – indeed, I didn’t know about the other two books - Gentleman & Players (2005) and Different Class (2016) - when I read it and I don’t think anything was lost because of the omission. As for A Narrow Door, my goodness, I couldn’t put it down and yet I had to - at frequent intervals. Don’t try to read this novel all in one sitting, It’s much too intense, creating as it does, a dark world of emotional complexity where nothing is what it seems.

We meet Rebecca Buckfast in the Preface. She is the ‘new New Head’ at St Oswald’s Academy, the first female in history to take on the role, and in the year the old boys’ school merges with Mulberry House, to become co-ed. It has cost Ms Buckfast a lot to reach this venerated position, thus widening A Narrow Door for those who follow, not least because she is a woman and the male-dominated old guard don’t like it.

She is also a woman with a past, a woman who, as a five-year-old, lost her brother, older by ten years. Did he run away, was he abducted or the victim of a grisly murder? ‘The Disappearance of Conrad Price’ has long been the subject of documentaries, books and articles and despite the efforts of imposters, charlatans and the odd medium, no trace of him has ever been found.

The five-year-old ‘witness’ could not supply any information and, traumatized by events, her memory was securely locked behind ‘a green door’. She has endured mental torment, terrified by the gurgling pipes in her old Victorian home which ‘prove’ the existence of her childhood demon, Mr Smallface. Her parents have never accepted the death of their beloved son, their favourite first born, and Rebecca has been neglected ever since. 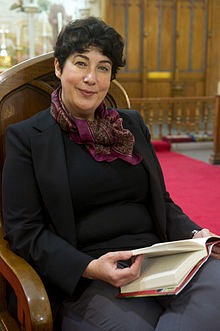 Joanne Harris
A mother at sixteen, and on her own, Rebecca has tried hard to make life for her own daughter, Emily, as normal as possible. She went on to meet and marry Dominic, a little older than her; he wanted to look after them both and to provide a home and holidays and days at the seaside and everything else a family should enjoy together but he too, had secrets and at the beginning of the story, he too, has died.

Told from the perspectives of Rebecca Buckfast, who represents the future of St Oswald’s, and Roy Straitley, the Classics teacher who is ‘part of the old school’ and firmly rooted in its past, the book is an interchange between the two set in 2006, with flashbacks to an earlier period in 1989. The switch is made seamlessly and it is for the reader, sometimes, to keep up, although the chess pieces at the start of each chapter are a useful clue as to who is speaking.

In Chapter One, a group of students, the ‘Brodie Boys’, find what they think may be human remains in the grounds of St Oswald’s, where a new swimming pool is under construction. They report the matter to Mr Straitley, their old form tutor, who beetles off to tell the ‘new New Head’. So begins this gripping psychological thriller, where history is revealed only little by little. On the pretext of wanting to save the school from yet more scandal, ‘La Buckfast’ stealthily delays reporting the find to the police, by playing Scheherazade to the Latin teacher who is mesmerized by her tale. Nothing is straightforward: Rebecca’s suffering in the past was real and her need to know the truth about her brother’s disappearance - which in turn threatened to destroy her life - makes this a compulsive thriller. Everyone has a part to play: beware ‘the innocent flower’.

The story flows as smoothly as the mythological rivers used as section headings. First, Acheron, (Woe) where menacing images of Becky’s childhood haunt the page. Next is Cocytus (Lamentation) then Lethe (Forgetfulness) when the reader begins to question what is real and what is false. The pace and tempo increase in Phlegethon (Burning), and then there is Styx (Hate) with its monstrous revelations. It appears that Mnemosyne (Goddess of Memory) is often unreliable as the reader is led into Asphodel, the land of the dead, and on to Tartarus, the land of eternal darkness.


Also by Artis-Ann ...
Review: Her Last Promise By Kathryn Hughes‘So Many Dead In The Ashes’ : Dust Off The Bones by Paul HowarthMelody Of Peace: The Electric By Tim MurgatroydHe Knows I Know He Knows: Cradle Song By Robert EdricThe Best And The Absolute Worst: The Dressmaker’s Secret By Lorna Cook
The storytelling is excellent and the characterisation, masterful. Rebecca Buckfast is a complex character who manipulates men to suit her needs. Roy Straitley is troubled by memories of his old friend and fellow teacher, the late Eric Schoones, but endears himself to the reader. I felt the grief of Mr and Mrs Price but wanted to shout at them, to remind them they had another child. Carrie was the avant garde drama teacher who enjoyed her little rebellions and though Dominic (and the gang) tried so hard, Rebecca still did not trust his motives. And so on. I must admit, I did particularly like the cameos of the Brodie Boys, especially their gift of a gargoyle and the scene when Roy was in hospital, surely a nod to that other teacher, Jean, when she was in her prime. So many others were woven into this tapestry, all with vital roles to play and all believable.

This is another carefully crafted work by Joanne Harris, compulsive and gripping to the very end.


A Narrow Door is published by Orion