The Metamorphosis - Franz Kafka: The Multiple Meanings Of A Sparkling Gem!

Fiction’s capacity for polysemic richness can invite a dizzying, heterogenous cornucopia of hermeneutic approaches as readers and critics alike hunt for the possible meaning cocooned within a book’s intriguing pages. Each interpretive response is hypothetically valid, unless rooted in flawed assumptions or fanciful extrapolation. As with beauty, interpretation is in the eye of the beholder and therefore subjective, even when purporting to be objective! Our perceptions are filtered through a diaphanous mental membrane, shaping what we see and architecting our conscious and unconscious cognitive and emotional responses.

Books are wondrous joys partly because they reflect their author’s minds and partly because they reflect our own. The meaning of any text is never absolute or reductively definitive. Books are not mathematical equations subject to inviolate arithmetic principles demanding strict adherence in order to establish unequivocal fact. As such, a work taken from fine literature’s canon simultaneously refracts multifaceted meanings, much like a cut diamond emits its coruscating light. Franz Kafka’s (1883-1924), Die Verwandlung or The Metamorphosis, originally published in 1915, is one such diamond.

Ostensibly a simple, if surreal tale running to less than one hundred pages of distinctly, bone dry prose, brachyology supplants lyricism here. Kafka’s celebrated novella is a rather odd tale; however its narrative is as easily followed as its meaning is mutable, translucent and perplexingly myriad. Our protagonist, Gregor Samsa awakes to find himself transformed into a three foot long beetle, his puny legs waving frantically in the air as he lies on his back in bed early one morning. His quotidian life as a travelling salesman is abruptly transmuted into a discombobulating struggle to leave his boudoir, and crawl furtively towards pragmatic adjustment, understanding and ultimately survival.

So, man becomes giant bug, man-bug revolts against his family and retreats to solitary confinement, filth and melancholic stagnation. Man-bug expires, his will to live enervated by a masochistic hunger strike catalysed by the knowledge that he is not wanted. The End. Simple stuff, job done. Far from it…now the heavy lifting begins!

Rightly, critics regard Kafka’s phantasmagorical novella as one of the seminal works of fiction of the twentieth century. Indeed, praise for his genius is almost as unanimous as disdain for the works of Jeffrey Archer is ubiquitous. W.H. Auden called Kafka ‘the Dante of the twentieth century’. The novelist Vladmir Nabokov considered him one of his epoch’s masters. Gabriel Garcia Marquez said that The Metamorphosis showed him, ‘that it was possible to write in a different way’. His canon has influenced innumerable luminaries of literature’s mighty treasure chest, whilst also shaping the work of celebrated modern authors reverently in debt to his avant garde genius. 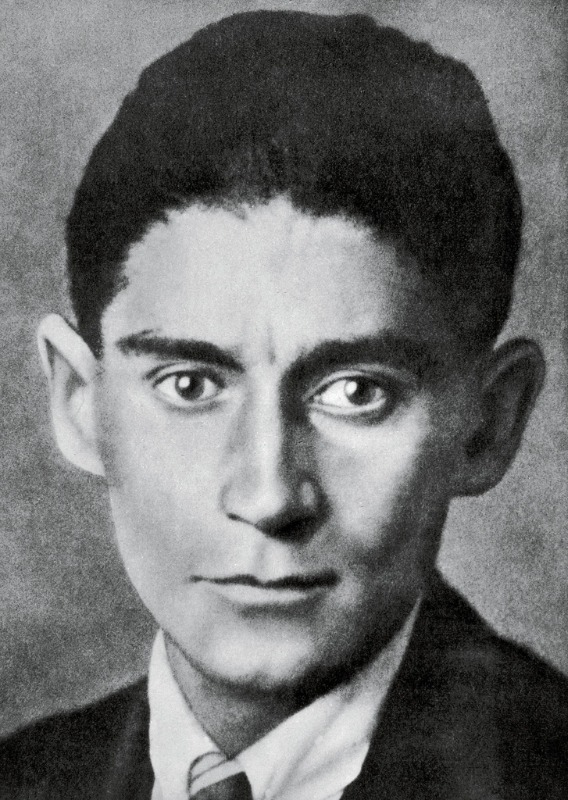 Franz Kafka
Paradoxically, a quirky if nightmarish story appearing to be almost childishly straightforward, is in fact verdantly enigmatic and ripe for both ignorant extrapolations, or contentious interpretative analysis. Kafka’s delightfully simple man becomes bug, man-bug sadly expires story, divides opinion as efficiently as a shopper coughing in the supermarket, sends its patrons scattering like energised snooker balls at the beginning of a high stakes frame! Though many esteemed critics agree that Kafka’s tale is the apogee of his genius at work, consensus ends at that point, fractured into multifarious shards of mutually contradictory pronouncements, precipitating ignoble scholastic bunfights and ongoing passionate debate.

Critics have typically responded to Kafka through the prism of their particular interpretive school. His words can be shoe-horned into elaborative arguments like ingredients, idiosyncratically purposed by inventive chefs in pursuit of a defining signature dish. Marxist scholars assert that Kafka distorted reality and sought to eviscerate capitalism. Those of an existential bent see his work as exploring hopelessness, absurdity and the search for idiosyncratic self-actualisation. Laudable notaries of the Expressionist and Surrealist movements hotly discredit the views of those unsympathetic to their own persuasions, instead proposing interpretations demonstrative of their own intellectual paradigms and artistic proclivities. Some of these critical theories hold water, others leak like a sieve, depending upon who is doing the pouring!

William Burroughs famously claimed that Kafka’s canon self-evidently orbited the themes of struggle, pain and solitude, seeing his works as a desperate call for the sovereign imperative for human intimacy. Thomas Mann believed Kafka’s work to be allegorical, a metaphysical manifesto for the need to seek God. Gilles Deleuze and Felix Guattari argued that the ‘traditional’ themes of alienation and persecution had been gratuitously over emphasised and occluded a far more pertinent truth…Kafka was having a laugh, his dark, surrealist comedy lambasting the human predisposition to create self-inflicted misery and psychological disorientation upon consciousness.

Milan Kundera suggested that Kafka’s malevolent surrealism was in fact an inversion of Dostoyevsky’s presentation of characters who are punished for a undeniable crime, whereas Kafka’s protagonists are punished even though a crime has not been committed. He asserted that Kafka, the product of a callously patriarchal family and a ruthlessly totalitarian state, sought merely to indignantly complain about injustice and oppressive iniquitous governance.

Then we have the Absurdists. Devotees of this critical school contend that Kafka’s work and in particular The Metamorphosis, is an essay vilifying the unseen forces acting upon human agency, both unjust and impersonal. They point to Kafka’s training as a lawyer and seek to interpret his work as being a ribald, ironic salute to mankind’s ludicrous belief in natural order, benefic legislative sagacity and the unimpeachable supremacy of intelligence over chaos. In an absurd world, absurdity is the least absurd concept and critical illation should acknowledge this truth!


Also by Paul Spalding-Mulcock...
Review: A River Called Time By Courttia NewlandAn Interview with Alice Ash - Author of Paradise Block‘ …Really Real Poor People, Surviving Alone Together’: Paradise Block By Alice AshForgotten History, Contemporary Truths:The Tainted By Cauvery MadhavanInterview With Catherine Menon - Author Of Fragile Monsters
Nestling up against religious or psychological interpretations of The Metamorphosis, many other responses could be enumerated. Sampling this range of critical theories is not unlike raiding a box of chocolates…a diverting exercise almost guaranteed to discover both the unappealing and the richly satisfying. Charles Neider in his The Frozen Sea : A Study of Franz Kafka was the first critic to see Kafka’s short tale as being an expression of his father complex. Whereas Nabokov rejected all sociological interpretations, including the father complex theory, suggesting that Gregor’s sister Grete is in fact the real villain of the piece. He went on to suggest that his friend had written a quasi-autobiographical account of his struggle for existence as an artist in a society of philistines, who systematically destroy him step by step.

In 1989, Nina Pelikan penned a feminist interpretation arguing that the Grete was the real subject of the book’s eponymous title in so much as it is Grete who changes before our very eyes. In 1999, Gerhard Rieck pointed out that Grete and Gregor form a symbiotic pair and reminded his readers that much of Kafka utilises the trope of coupling, both symbolically and literarily. Rieck posited that brother and sister were in fact hemispheres of Kafka’s own bifurcated persona.

Reiner Stach argued in 2004 that the story was complete in and of itself and needed no further contemplation or critical meddling. Peter-Andre Alt responded to Stach’s assertion by arguing that the story is about deprived existence, echoing Nabokov and embellishing his idea by suggesting that Gregor is reduced by ‘a functionalist patriarchal life’.

Ralf Sudan had sympathy with the reductionist theory, however he concluded that the story was one of self-abnegation, in which Gregor submits to his family’s denial of his own existence and right to an autonomous identity. The colourfully named Fernando Bermejo-Rubio argued in 2012 that Gregor’s perspective, and that of his family, are both contradictory and equally valid. As such, the reader, unmolested by an omniscient narrator, cannot trust either viewpoint and the story inevitably guides the reader to the epicentre of its truth…Gregor is the victim of his own degeneration.

Sticking with exotically named contributors to the debate, Volker Drüke argued in 2013 that The Metamorphosis of the title is meant to refer to the relationship between Gregor and his family. He supports a feminist interpretation in respect of Grete’s transformation from a callow girl, innocent and powerless, into a burgeoning, vivacious woman. This theorem perhaps leads one to conclude that Kafka explored both the tragedy and the cruelty of an individual immured within the confines of his family. Individuals are inextricably significant to Gregor, yet are both dispassionate and hysterical, especially when the mettle of their humanity is tested in the forge of fiscal and physical tumult.

To bring an idée-fixe to Kafka in search of meaning is to throw the metaphorical baby out with the bath water. We can with some confidence conclude that The Metamorphosis does explore the seminal themes of alienation, existential anxiety, personal guilt and oppression and absurdity. For me, all these themes can be traced back to Kafka’s biography, the meat and potatoes of his short, tuberculosis-plagued life. Indeed, finding autobiographical details in his novella is both intrinsically scintillating and extrinsically useful. Doing so has led this ‘critic’ to fancy that The Metamorphosis may well be both a confession and an indignant cry of complaint. I suspect Kafka wrote his famous story as a cathartic exercise designed to purge himself of his own demons, take a few pot shots at his father, fate and all that oppressed him, whilst commenting upon the absurd unfairness of life itself.

As Montaigne said, ‘what do I know?’. Boiling it all down, The Metamorphosis is a wonderful sparkling gem within literature’s firmament, and the only opinion or interpretation that really matters…is Yours !