The Artist As Poet: Quest For Ions By Browzan 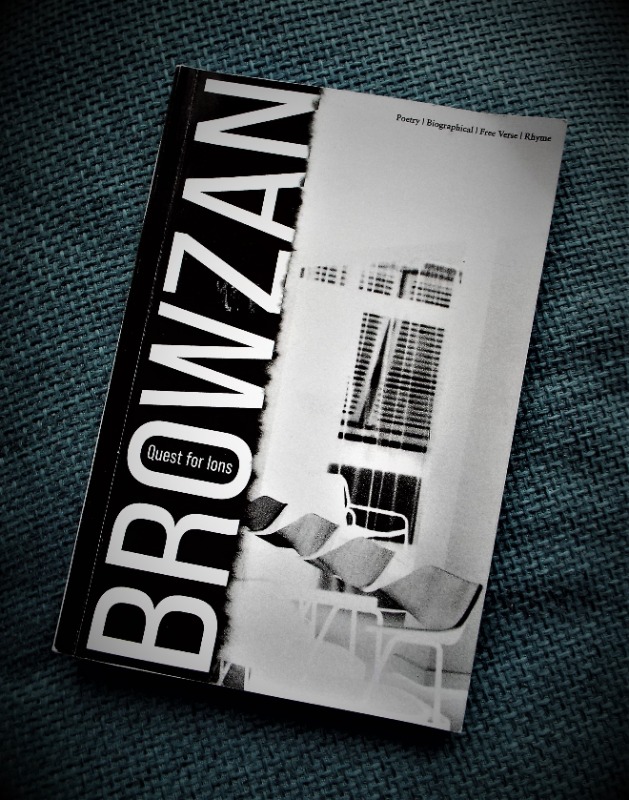 Christopher Brown (aka Browzan), visual artist, filmmaker and poet, has published his first collection of poems Quest for Ions, with artwork designed by Russian born, Berlin-based visual artist Olya Dyer. Autobiographical in nature and written over a decade, the collection is an act of self-exploration of personal truths, initiated and organised after a period of reflection in Copenhagen. Described by Browzan as part of a cathartic process created during significant events in his life, the importance of art features strongly in memorable lines woven into the fabric of the poems.

Browzan opens with ‘Page one’, a short paean evoking an image of Van Gogh’s ‘Starry Night’ to celebrate the vivacity and radiant beauty of the poem’s recipient, the words chosen with the deft touch required of the impressionist. It is in these shorter pieces and in specific well-crafted passages or phrases that his skills shine most brightly. In ‘The open window’ we have an existential grasp of moments printed on the human consciousness with such memorable lines as...

In ‘Bethnal Green’ we get a stream of consciousness, fuelled by observations made by the poet at the time of writing in London and influenced by an appreciation of Ginsberg, who also inspired ‘Hometown Visitation’. This feels to me like a key poem in the collection, reflecting on a return to Brighton, Browzan’s place of birth, the starting point on a revolving wheel which features in a fine, affectionate and beautifully atmospheric promotional film produced, directed and edited by the author. Filmed on location in Brighton in black and white and using the haunting backing track of Ennio Morricone’s ‘Matto, Caldo, Soldi, Morto Girotondo’, it is well worth watching as an example of the range of Browzan’s artistic skills as he delivers the poem to the watching audience.

Widely travelled, in ‘Sehnsucht’ the poet reminisces about time spent in Berlin, which he describes as...

‘A sanctuary for lost souls …

A smacked arse
A filthy paradise,
A wounded cat,
Starved of affection,
Moist from the downpour,
And yet still purring
At the prospect of a chin stroke …’

We witness, through the eyes of the poet, life in a myriad of imperfect forms with which Browzan identifies strongly and affectionately:


Also by Jonathan Humble...
Poem Of The Week Children's Special: Head In The Clouds By Charlie BownThe Balloon Goes Up: Adventures In Children’s PoetryChasing Clouds - To See The World Through Poets’ EyesReview: What Is A Bong Tree? By Michael RosenThe Dirigible Balloon: Preparing to Launch a New Webzine for Children’s Poetry
We are taken to Paris to consider love; to the olive tree fields of Italy to reflect on familial roots. In Copenhagen, much like the world-weary multi-faceted protagonist of Ottinger’s film, Bildniseiner Trinkerin, Browzan details a feeling of freedom to follow an instinct and need for artistic endeavour, resulting in this first collection of poetic work.

Being allowed into this poet’s self-questioning process, into his reflections, revelations and daydreams was a positive and privileged experience. Described in the Poiesis biography as ‘laconic and painterly’ it is true that the shorter, skilfully written passages have the feel of oil on canvas; as an example of someone engaged in the exploration of writing as art, this was certainly a sure-footed and optimistic beginning.

Quest for Ions is published by Poiesis