Terror Stalks The Streets: The Runaway Family By Diney Costeloe 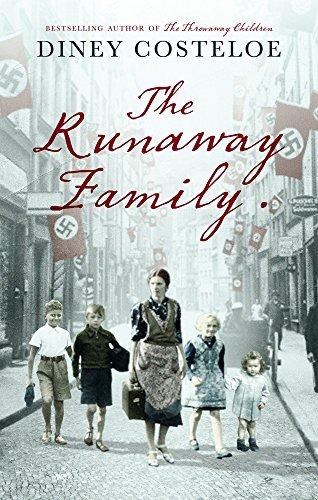 This novel has found its way to the top of the ever-increasing pile by the bed. I hadn’t even noticed it but when it appeared, it was one of those I couldn’t ignore. I love good historical fiction and this didn't disappoint, although it is not a cosy read for a winter’s night. Much has been written, both fiction and faction, about the persecution of the Jews in the years prior to World War Two, and it was on 27 January 1945, that Auschwitz concentration camp was liberated after more than a million people had been murdered, as part of the Nazi's ‘final solution’ to the Jewish question. Dachau, the first concentration camp to be opened by the Germans and the scene of countless deaths and executions, was liberated four months later.

I'm glad to have read The Runaway Family which has added to my understanding of that ignominious period of German history. To focus, as it does, on the plight of just one family intensifies the undiluted horror. Beginning in 1935 and ending in 1939, it offers an insight into life in Germany for a Jewish woman and her young children in the time leading up to the outbreak of war. Her anguish and fear as she tries to keep her children safe from the brutality of the SS, is stark throughout. The horror of the Nazi orphanage with which they are threatened, is more implied than stated, creating a greater sense of menace. Fact meets fiction but with authenticity, so there are some difficult scenes to read.


To focus, as it does, on the plight of just one family intensifies the undiluted horror.
It opens with a pogrom, the first of several in the novel, “as the crash of shattering glass…startled [ten year old] Laura awake”. There is an orchestrated riot, bent on the hateful and wilful destruction of Jewish homes and businesses at a time when there is an ever-increasing list of “Laws for the Protection of German Blood” which erode Jewish rights. Jews could be arrested for breaking laws they did not even know had come into existence as one directive hastily followed another. Kurt Friedman is arrested that first night and torn from his family; we learn later that he is taken to the hellhole which is Dachau. The details of his treatment in that prison camp are not gratuitously described but the facts of daily life are made clear. Meanwhile, the reader journeys with Kurt’s wife, Ruth and their four children, as they try to escape the hatred all around them.

She quickly learns they have to keep moving and they manage to reach Kurt’s brother, Herbert, in Munich. Surprisingly, there is no warmth in the welcome they receive but they develop a modus Vivendi until it is time for them to move swiftly once again, courtesy of Herbert’s housekeeper, Frau Schultz.

They make it to Ruth’s sister in Austria, having picked up Helga, Ruth’s mother, on the way. The welcome they receive is again cool. Edith’s naivety and her husband’s arrogance are hard to witness when the reader has already travelled so far with this bedraggled group but, for a while at least, they can live in relative safety.

A reader with any knowledge of German history, however, is already powerlessly screaming at them to move on as the Anschluss takes place. There is no ‘sound of music’ for this family, only the fear of the jackboot as the “hundred thousand voices swelled to a roaring chorus” at Hitler’s first Austrian rally. The menacing march of the Nazis intensifies.

Kurt, having been released from Dachau, is one step behind, searching to reunite his family.


Edith’s naivety and her husband’s arrogance are hard to witness when the reader has already travelled so far with this bedraggled group ...
As well as the strong and staunch Ruth, the children come to life on the page. Their few toys, lost and found, damaged and repaired, are symbols of innocence. Laura, the oldest, becomes her mother’s rock. Inge retreats into herself and her wide-eyed horror at each new attack, is heartbreaking, while the young twins, Hans and Peter, find solace in each other and at one point, resort to a language only they understand. Other, equally credible, minor characters emerge to play a vital role in Ruth’s life, either for their beneficence or otherwise.

Thankfully, Costeloe makes clear that “There were still good people who were ashamed of how their countrymen had treated the Jews”, that there were Germans who said, “we are not all Nazis”. But she also makes explicit their fear of helping Jewish friends. They were justified, as shown in the treatment of some of those who do show kindness to the family - often offered secretly by those who knew they were risking their own lives to do so.


In spite of the subject matter, the novel does offer hope.
Costeloe questions the existence of a God who seemed to be “no longer listening” and it is sadly easy to see why people thought He no longer cared.

She also suggests that many German Jews saw themselves as Germans first. They had relatives who had fought for Germany in the First World War: “He thought of his father, wounded, fighting in the trenches... He'd been good enough to be a German then”. It can but have come as a great shock to be so hated and so cruelly persecuted, less than twenty years later.


It is important that popular authors keep writing accessible stories about these and similar episodes so we don't commit the dead to the backwaters of amnesia.
In spite of the subject matter, the novel does offer hope. The reader witnesses the fierce love of a mother for her children, of a husband for his family and their strong sense of unity. International help was eventually available for some and the Kindertransport rescued many, as was shown at the end.

We must never forget the horrors inflicted on six million men, women and children. It is important that popular authors keep writing accessible stories about these and similar episodes so we don't commit the dead to the backwaters of amnesia. “Those who cannot remember the past are condemned to repeat it”, said George Santayana. It took me no more than two days to complete this emotive read - a moving story, touchingly told.

The Runaway Family is published by Head of Zeus.