“Something Fishy About This Case”: A Book Of Murder By Victoria Dowd 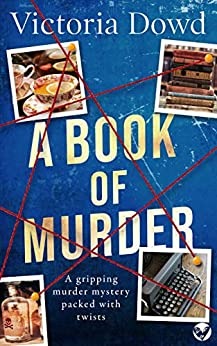 Victoria Dowd’s Smart Woman’s Mystery series began with her exquisitely quirky debut novel, The Smart Woman’s Guide to Murder. Back in 2020, Dowd presented us with an esemplastic tour-de-force in which she cleverly coaxed new tunes from a rather old, but much adored, fiddle. With sedulous legerdemain, Dowd took the classic tropes of the murder mystery genre and innovatively laced them with gothic leitmotifs, wittily acidic badinage worthy of Oscar Wilde, and lashings of ribald, Wodehouse-like humour.


...Dowd has once again given her reader precisely what they have come to expect from her pentimento-driven pen, but her latest book is kept fresh by dint of a significant departure from her usual narrative arc.
We also have red herrings and devious plot twists, deliciously lyrical descriptive prose, all seamlessly counterpointed by sensitively modulated musings upon grief, paternal fidelity, and the fragility of a disturbed, uncertain mind.

A Book of Murder is the fourth and latest instalment in her series, and though necessarily isomorphic in terms of its perennating stylistic and thematic literary components, Dowd has once again given her reader precisely what they have come to expect from her pentimento-driven pen, but her latest book is kept fresh by dint of a significant departure from her usual narrative arc.

Where the other books in the series saw our beloved cast of characters being ruthlessly stalked by a frustratingly invisible murderer in their midst, this one begins after a gruesome murder has been committed and the perpetrator safely in the Old Bailey’s dock. Detection is now less an imperative underpinning survival, and far more a tool to bring about justice.

That said, our protagonist Ursula Smart has a particular talent for drawing jeopardy into her life, much like a light attracting a bemused moth. Not only is the plot’s plaintiff in danger of her liberty vanishing under a judge’s unjust gavel, Ursula herself may be risking something even more precious …her life!

Once again, we have Pandora, Ursula’s hilariously captious mother and her small coterie of willing and un-willing acolytes. Brittle Bridget and her ridiculous menagerie of pets makes a welcome return, as does Aunt Charlette, Pandora’s gloriously naïve and sexually frustrated sister. Mirabelle, Pandora’s closest ally turned traitor is present in spirit if not in body, with the same being true of Ursula’s father in the form of his ever-present ghost.

Ursula once again unreliably narrates our tale, her fractured psyche deformed by grief and anxiety infusing all she sees with threat, loneliness, and the musings of her unmoored mind. Though our story centres itself upon Ursula and her search for justice, her mother’s grief and supercilious pomposity saturate every page as the external and internal plots meld together.

So, to the main plot itself. “Mother” has wangled an invitation for herself and her cronies to attend the latest book launch of bestselling crime author Anthony Lovell. Author of the internationally successful Sheridan Le Foy series, Lovell has also invited an omnium-gatherum of the world’s leading crime authors, critics, agents and even a Hollywood star to his vainglorious launch party.

Twenty guests join him at his Bond-Villain home, a converted sea fort for a sumptuous banquet of fine foods, the pièce de resistance being a rather exotic fish course. Our suave, but odiously egotistical host has arranged for his guests to be served fugu, a fish so poisonous that if not expertly prepared will prove lethal to those dining upon it. The assorted guests swim through a sycophantic slurry, further befouled by mutual contempt and self-interest, whilst maintaining the masquerade of polite civility. The Smart women are as incongruous as they are unwelcome.

Ursula awakens to blood-curdling screams and the deed has been done. Lovell is dead, the fugu’s deadly tetrodotoxin swallowing his life by dint of having been mixed into his late-night cup of tea. Dowd once again gives us a locked room mystery to solve, for though each one of his guests has a compelling motive to kill off Lovell, only his wife could have had access to the two rooms involved in his murder.

We move to the Old Bailey where his wife is on trial for the murder of her husband. “The most open-and shut case imaginable”. As Ursula and her quixotic clan observe the legal proceedings, her alogical intuitive senses stir into life and force her to confront an uncomfortable certainty… there is “something fishy about this case”.

What follows is a series of flashbacks, interspersed with chronically sequential scenes from the court room as the plaintiff’s fate grows gradually more certain. Insuperable facts seem likely to condemn the accused, yet Ursula begins to piece together the identity of the real murderer. Regrettably for Ursula, the murderer is rather keen to keep such facts submerged beneath a swirling maelstrom of deceit and betrayal.


Dowd has once again given her reader precisely what they have come to expect from her pentimento-driven pen, but her latest book is kept fresh by dint of a significant departure from her usual narrative arc.
Our secondary plot is even more captivating than that which it embellishes. Dowd dextrously portrays Ursula’s mental funambulism as she vacillates between pain-soaked self-awareness and cognitive torture. Battling the twin demons of grief over her father’s death and concern for her mother’s own loss-riddled psyche, Ursula tentatively attempts to cross the canyon of her own mental anguish - a perilous journey given the slender strands holding her unreliable mental faculties together. The two plots entwine, their existential fibres knitted together to form the novels death-stained cloth.

Structurally, the big departure mentioned ut supra, is that our story starts after a murder has been committed and the murderer has been caught. Echoing the titular protagonist of Lovell’s novels, Ursula must perform the role of Sheridan Le Foy, himself a criminal QC, if justice is to be served. As an ex-criminal barrister Dowd is well placed to set half of her novel in a suitably officious courtroom, and her astonishing facility for descriptive prose allows her to convincingly set the rest inside Lovell’s eccentric sea fort.

Characteristically, the book’s chapters are short, enabling the complex plot to twist and turn with a gymnast’s agility as Dowd feeds us a rich diet of red herrings, nuanced revelations, and juicy tit bits. Tension is never sacrificed simply because Dowd maintains suspense and the element of surprise throughout, despite her melding of two plots and two periods in time.

As with her other novels, cliffhangers end each chapter, foreshadowing is used skilfully, the pluperfect tense seamlessly woven into the past perfect and pace maintained by dint of observing Flaubert’s advice, “action must develop itself. Everything must grow freely, and you must do no forcing in one direction or another”. Dowd, ever the savvy realist, also employs Raymond Chandler’s maxim, “If the plot flags, bring in a man with a gun”. As with all good thrillers, Dowd invites her reader to constantly ask questions. Much like a politician at the dispatch box, she seldom provides anything approximating to the truth, until her denouement!


... we have a meticulously plotted narrative, dashes of laugh-out-loud humour and thrilling action ...
Her characters observe Eliot’s “Objective Corroboration” in that they are shown to us, not clumsily described. We understand their actions because we understand their motives. Mannerisms, clothes, and personality traits are astutely observed, the fundamental bedrock of all character rendition. Their verisimilitude is further bolstered by Dowd’s skilful use of dialogue. Not only is the plot advanced by dint of her pitch-perfect dialogue, but Dowd also knows that A.E. Coppard was entirely right when he said, “A character doesn’t come to life until he speaks”.

Interestingly, though Ursula and her mother are polar opposites in terms of their external veneer, they share an internal commonality; both are drowning under the oppressive weight of their own grief and need for stability in the face of painful truths. Flaubert said about his most famous character, “Madame Bovary, c’est moi !” If creating truly real characters means embodying parts of yourself as a writer, as was Flaubert’s belief, what does this tell us about Dowd! Perhaps nothing, perhaps something, and I suspect we will never know, such is Dowd’s ability to keep her reader guessing.

Ursula’s musings upon grief are key to the book’s power in addition to forming a significant part of its thematic substance. Unlike some crime writers, Dowd uses emotion to flood her books with visceral force. Yes, we have a meticulously plotted narrative, dashes of laugh-out-loud humour and thrilling action, but she pulls us into the book’s inner world with surprise confrontations with a subject none of us likes to face…death. Her prose when doing so is magical.

“Grief isn't the kind of injury that just heels over and goes back to how it was. It's more like the loss of a limb. Mother was still stumbling less so now, but Mirabelle's loss had sliced off a large part of her and that utterly destabilised her!”

By way of critical notes, I found the pasquinade targeting members of Dowd’s old legal fraternity amusing but structurally irrelevant, the chapter serving little purpose other than to introduce a whiff of mirth before it was needed. Similarly, the final chapter may well have tied off a tension enhancing loose end, but did little to intensify the novel’s denouement. Rather like watching the final scene of a play, only to have the actors come back on stage and perform a contrived extra scene for no obvious reason.

So, all in all Dowd has unsurprisingly done it again! She’s given her fans yet another gloriously zesty murder mystery made all the more entertaining by dint of her devious mind, linguistic aplomb and assiduous craftmanship. As one of those fans, I’m itching to see what Dowd does next with her infinite talents!

A Book of Murder is published by Joffe Books