‘So Many Dead In The Ashes’ : Dust Off The Bones by Paul Howarth 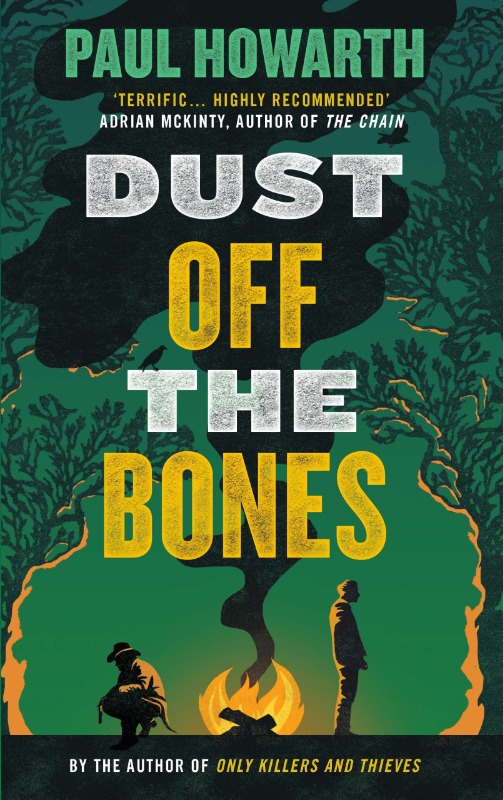 I reviewed Howarth’s debut novel Only Killers and Thieves a few weeks ago and said I would get hold of the sequel, which I have – and I read it just as quickly, captivated once again by the characters and events. Dust off the Bones begins five years after the end of Only Killers and Thieves and, with a couple of time leaps, ends sixteen years later. It may be read as a standalone but the reader benefits from having read its prequel which provides a greater depth of understanding of the characters and their motivations.

Despite some new characters being added to the mix, the old familiars remain, those who still have a part to play in the conclusion of this drama. Most are older but no wiser, yet there are some good and decent people who offer hope to the reader.

Since the tragedy which hit their family, Billy and Tommy McBride have gone their separate ways, living miles apart, each dealing with the events they witnessed and took part in, as best they know how. Both are suffering from the trauma because although you can run, you can’t hide from the nightmares of your past.

Billy is married and now has a young family. He enjoys all the trappings of wealth provided by his wife. Little by little, she becomes more suspicious of her husband, however, and ultimately learns not only what he has done but that he still takes no responsibility for his actions, always finding someone else to blame. As they drift apart, she proves herself to be the stronger of the two. I liked the overt nod Howarth gives to the treatment of women in this masculine world and the fact Katherine fights back.

Tommy is always on the move, seemingly destined to be forever punished, especially after an accident resulting in the death of a bully makes him an easily recognisable wanted man. Each time he thinks he’s found peace, his life is shattered and he is forced to continue his journey. Noone’s warning that the two brothers must never meet again is one he is wise to take seriously.

Morally diminished, Billy doses his fears with excessive supplies of alcohol but Tommy, despite his nightmares and his fear of Noone, has grown big, and strong; once again, Tommy is the hero and moral compass.

Henry Wells is a lawyer who tries to fight for justice for the Kurrong, in light of the atrocities the tribe endured. Without accountability, no wrongs will be punished and he wants to make those guilty of genocide, accountable. When a report is filed by a witness to the massacre of which the McBrides were a part, Wells sees his chance. He succeeds in initiating a judicial review, believing in the law to overcome prejudice and bring the truth to light so that heinous villains may pay the price of their evil wrongdoing – there are echoes of Mockingbird here. Despite his own deeply personal secret – and again, I appreciated Howarth’s social comment - Wells is prepared to risk his reputation, not realising the strength of his opposition and the dreadful cost of his actions.

Inspector Edmund Noone is not mesmerising this time as he sadistically continues his reign of terror. He has not softened with old age. It is clear that he is bored with his reputable existence. Working in a coastal suburb of Brisbane, he is now the local police chief with political ambition, but feels confined by an office in the city. He plays the role of dutiful husband and father until his hand is forced and he has to make good on his earlier promise. He sets out to tie up all the loose ends which might threaten his future and he takes pleasure in doing so. The last of his henchmen, Sergeant Percy, is a sidekick worth avoiding.

Dust Off the Bones is thought-provoking as it once again raises the timeless issues of injustice and the abuse of power, honour and morality. The writing is fluid and beautifully crafted; the central characters thoughtfully drawn and the descriptions of the landscape are powerful. There are brutal moments in this novel but the narrative is more important and it is worth reading to the end – in fact, once you start, you must read it to the very end.

Dust off the Bones is published by Pushkin Press