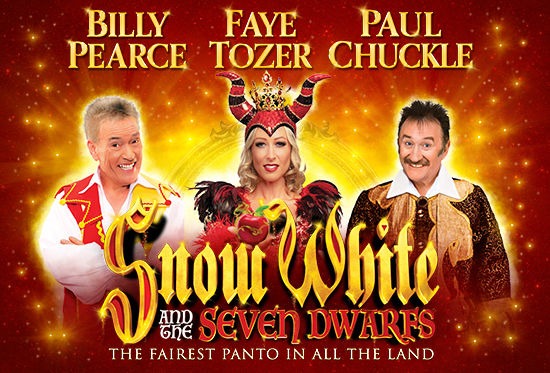 Bradford Alhambra’s pantomime has become a love affair between its main protagonist, Billy Pearce, and his adoring public, but how long this marital bliss can last is questionable.

The UK’s premier panto producers, Qdos, re-book Pearce year after year for one reason and one reason only: he continues to pack ‘em in and the audience love him so I have little doubt that it will sell out, for now at least.

However, this singular personality-led approach, adopted by so many theatres, is, in this case, slowly fragmenting, not unlike the mirror mirror on the wall in this year’s offering, Snow White and the Seven Dwarfs.

Every year the entire show is built as a vehicle for Pearce – this year ‘Muddles’ – accompanied this time by Paul Chuckle, formerly part of the legendary Chuckle Brothers, but tonight, Oddjob, right hand man to the baddie, Queen Lucretia, aka Faye Tozer from pop band Steps.

The storyline, tentative at best, was diluted almost completely by a series of unconnected sketches, there purely for the benefit of Pearce and Chuckle to display their comedy wares. Some of these self-contained comedy moments were amusing others, tired and re-hashes of previous years.


Also by Phil Hopkins...
Newbies Give Joseph Fresh ImpetusOverblown But Enjoyable - Spirit Of The DanceA Dignity That Outwitted The HolocaustTriumph Of Priestley’s Timeless Drama of ConscienceZombie Attack In Leeds (Playhouse!)
Then, in the second half, Billy suddenly announces that there’s a monster in the forest……..this huge dragon appears and then disappears without reason or question! It was almost as if someone had been heard to utter: “Bang a dragon in, they’ll love that,” and, judging from the whoops and screams, they probably did!

Billy’s ‘flying carpet’ (sorry that was Aladdin) was, this time, a flying motorised scooter.

The Alhambra pantomime is now a format and, whilst Billy Pearce is a professional, very hard working and talented performer, I still wanted to see a dame, a song sheet and a short roll call of ‘…and who have we got in tonight?”

It is as if some of the basics have been redacted in the quest to achieve a total personality driven product.

And I didn’t need Billy to stand up at the end of the show and thank everyone in the cast for being so brilliant. What’s that all about?

Did John Gielgud ever do that after a performance of Hamlet? “Can I just say before we call it a night that Laertes was fantastic and the way the gravediggers raised Yorick from the soil was just amazing.”

When you start to feel bored or, even worse, you know what’s coming, then perhaps it is time for some fresh eyes. A big budget, gizmos and big names aren’t enough and I have to say that, for me, the City Varieties panto knocks this one into a cocked hat for a whole set of different reasons and probably has a tenth of the budget.

Nevertheless, credit where it’s due.

Faye Tozer as the witch was wonderful, Matthew Croke as Prince William did not live up to his surname because he had a great pair of pipes and, as always Billy Pearce worked so hard and yes, the audience loved him and his double entendre loaded script, despite any of my comments!

But when he asked the audience at the end: “Would you like a bit more?” as part of his final gag, I found myself silently replying: “No thanks, I’ve had quite enough.”