Porter black as a curate’s cassock topped
With a head of creamy, soft Croagh Patrick clouds;
Smoke and laughter spool the room
While in the corner, calling the tune,
Are piper, fiddle and squeeze box.
Then a waltz is crooned and the dark night is
Set back and tinkers and Kerrymen lilt along.

For some the far green hills of Sligo and the bare
Stone teeth of Connemara come too close, and eyes
Glazed with salt tears see the mirrored glass and wood bar blur,
And the spinning couples sliding past,
Are smeared as in a mountain mist and the room
Grows soft as veils of sea fret come sweeping in
From out so well remembered bays
And the hills of Connemara come too close.

Continuing last week’s theme of longing and mental return, our Poem of the Week is an elegy for home, interpreted by a poet whose Irish ancestry, though generationally removed, endures in the Braille of intuition and inference. Here, the call of Natalie Rees’ ‘Hiraeth’ is answered in the ‘caoining’ of the navvies and labourers who throng in the Irish Club of Mike Harding’s memory. 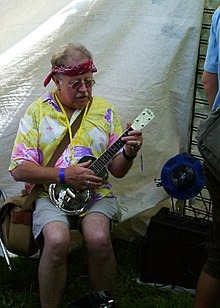 Mike Harding - at Fairport's Cropredy Convention.
The gentle undulation of the poem’s rhythm elicits the sense, if not the presence, of rhyme; the cadence of the two stanzas – the first setting the stage, the second describing an abstract and complex emotional attachment – mirrors the music and dance which are conduits to the exquisite pain of wanting that could never adequately be contained in the word ‘nostalgia’.

Harding’s use of simile and metaphor is deft throughout: installing the poem in the institutional fabric of the Church and the Boozer in the first lines, the poet goes on to construct an architecture of joy and longing which wraps the spiritually subsumed observer in an occlusion of Guinness glasses and fag smoke. A compelling antidote to deracination, and its émigré corollary, bloody hard graft, ‘The Irish Club’ is a repository of rare sonorous beauty; its call, to collective memory and suffering.

The images of sea frets and mountain mists become tangible as they gradually meld with the retrospective present, as though the two were briefly indivisible. And the tender lyricism of love and loss dissolves the cliché of diasporic stereotypes in waves of eloquence.

‘Hulme Five – August 1969’ is taken from The Connemara Cantos and is published by Luath Press.