Sundays too my father got up early
and put his clothes on in the blueblack cold,
then with cracked hands that ached
from labor in the weekday weather made
banked fires blaze. No one ever thanked him.

I’d wake and hear the cold splintering, breaking.
When the rooms were warm, he’d call,
and slowly I would rise and dress,
fearing the chronic angers of that house,

Speaking indifferently to him,
who had driven out the cold
and polished my good shoes as well.
What did I know, what did I know
of love’s austere and lonely offices? 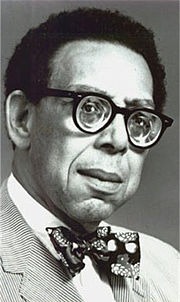 Robert Hayden
A subcutaneous delve beneath the austere hardship of a northern US winter reveals a story of undemonstrative love in African American poet Robert Hayden’s studied homage to his father. The unconditional administration of duty to his son is without season, and we needn’t be discomfited by reading about aching cold and cracked hands on probably the hottest day of 2021, because the light of the father figure bathes his son’s poem in warmth.

Hayden accommodates suggestion like a comforting overcoat: in the ‘blueblack’ cold, the silent commitment to duty, and the comforting simplicity of the house, we hear faint echoes of different cultures and different times, of R. S. Thomas and perhaps of Heaney. The narrator’s observation might be consolatory except for the indication that he is returning affection too late in the day: the poem’s tone is apostrophic – we suspect that any ghost-laying is valedictory, the pain of unresolved disquiet reinforced by the father’s enduring consistency hinted at in the telling ‘too’ of the first line.


Also by Steve Whitaker...
The Swamp Ghosts Of Pripyat: Stalking The Atomic City By Markiyan KamyshThe Endless Opportunity Of Words: Lanyard By Peter SansomPoem Of The Week: Wheel By Stephen DeePoem Of The Week: The London Dinner Party By Jayne JosoPoem Of The Week: The Vote By Ralph Dartford
Such disquiet remains conspicuously unaddressed: Hayden’s telling line - ‘fearing the chronic angers of that house’ – opens a wound of pain and recrimination which must be restrained within the insulated shell of the sonnet form. The limpid beauty of the poet’s imagery, foregrounded with utter conviction, returns us to the possibility of a love distilled in detachment.

‘Those Winter Sundays’ is taken from 101 Sonnets: From Shakespeare to Heaney, edited by Don Paterson, and is published by Faber and Faber.