The fox drags its wounded belly
Over the snow, the crimson seeds
Of blood burst with a mild explosion
Soft as excrement, bold as roses.

Over the snow that feels no pity,
Whose white hands can give no healing,
The fox drags its wounded belly. 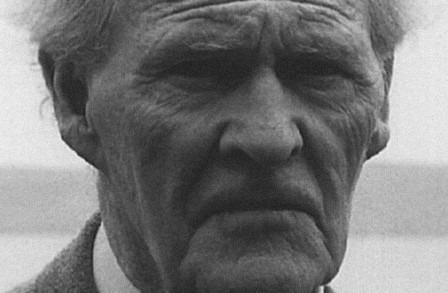 R. S. Thomas
The Anglican priest of the Welsh hills who gave laconic succour to dying farmers and to remote congregations offers little of hope or redemption in this short, powerful poem of winter’s unforgiving and brutal landscape. The poetry of R. S. Thomas is often agonized, an exegetic and compulsive working through of emotions that question the very fabric of his conflicted faith.

Drawing the reader’s attention to the fox – the dragging of its wounded belly is an image made more painfully ponderous by repetition – Thomas immerses his audience in a tableau whose colours are symbolically riven. The blood burst of ‘crimson seeds’ is dramatically counterpointed by the pristine snow, making of the latter an inert and moribund personification of the spiritual healing process. An inverse conduit for the animal’s ebbing life, the poet’s near oxymoronic settling of metaphors of soft excrement amongst thriving roses yields an exquisite illustration of the propinquity of life, decay and death.