I defy anybody to look at one of Pete Lapish’s paintings and not experience a warm glow and an urge to possess it. Anybody that is except, perhaps, an art critic, an academician, a modernist. 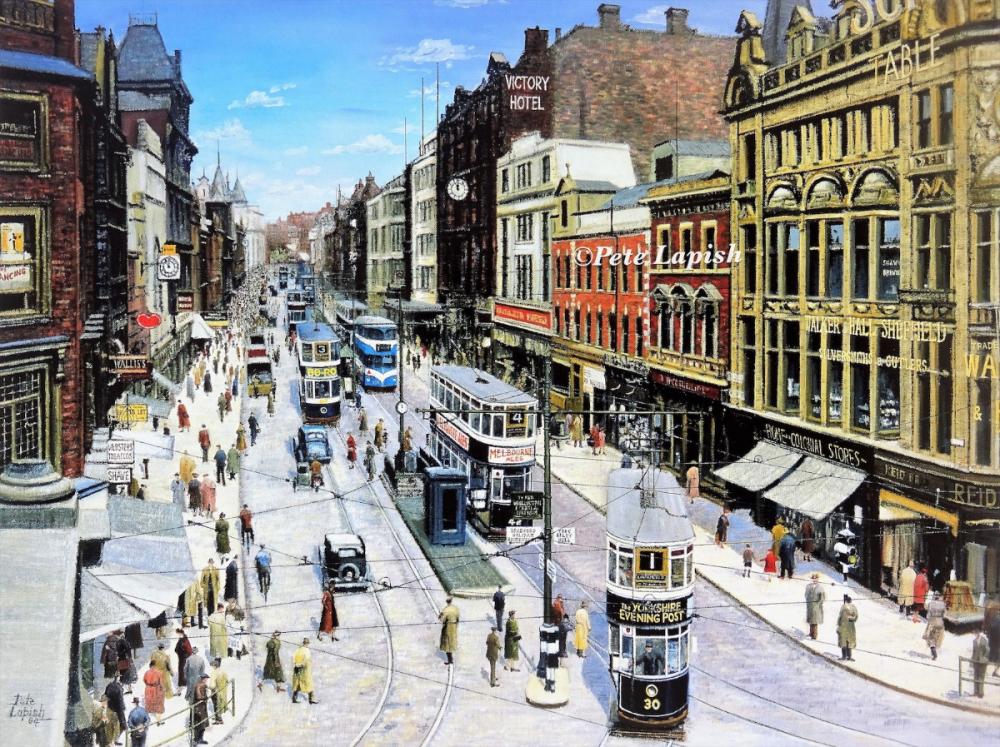 You’ll no doubt have admired his paintings of local scenes, hills, dales and coast, on covers of Yorkshire magazines, biscuit tins, postcards, and even on jigsaws, without knowing who did them. His lovingly nostalgic recreations of the age of steam engines, trams and canals are particularly appealing and hugely popular judging from the number of people, increasing all the time, who now follow his blog and access his website. He has had people contact him from as far away as Australia and Canada to express their admiration.

But he is by no means as well known as he should be and this is a mystery to me. It’s the first question I put to him. We are sitting in his lovely sun-dappled garden, surprisingly mature to say most of it has been landscaped by Pete and his wife, Rosemary, since they moved to Scarborough from Leeds in 2007. He shakes his head unable to give an easy answer. ‘I’m a loner, an outsider,’ he says, thoughtfully. ‘I’m self taught, not part of the art world.’

One of my favourite pieces and indeed one of Pete’s most famous paintings, probably because it was issued as a print by the Yorkshire Evening Post, is Briggate From Boar Lane Junction, Leeds c. 1930s, painted in 1984. The time, on two clocks, stands at just before noon giving some context to a busy moment frozen in time when people are crossing at the junction with Boar Lane, seizing the opportunity between trams. Way into the distance, approaching the Headrow, there are greater numbers of pedestrians. I love the attention to detail, for example the discolouration on the brickwork of the Victory Hotel, a building later pulled down and replaced by a Woolworth’s. And look at the centrally positioned light blue tram, waiting at the central barriers, providing a focal point. On an historical note, it’s one of only three of its kind, with chevrons on the front to draw attention to it being the very state of the art for the exclusive Lawnswood-Roundhay route. In the foreground, gilded in the low sun, is the splendid baroque structure of the Home and Colonial Stores, once one of the largest retail chains. It’s a beautiful composition with so much intrinsic interest.

It’s the sort of picture you would expect to see hanging in a municipal art gallery but for unfathomable reasons it isn’t. Pete is now in his early eighties and still battling for recognition after many setbacks and rejections of one kind or another over the years. Having now happily recovered from cancer, he is throwing himself into promoting his work by a different means. It’s now possible to admire more than 150 of his paintings displayed in his own on-line galleries and, indeed, to read poetical commentaries on many of them, explaining details of their composition and setting. ‘At last I have found my voice,’ he says, feelingly, ‘a way of making my work known to a wider audience.’


Also by Andrew Liddle...
Alone In Berlin In YorkBarnstorming Premiere At The SJT
You can lose yourself for hours on there, deep in wonder at the sheer painstaking detail that goes into creating the magical quality of his evocations of places and periods. The sheer vibrancy of his palette reveals a better brighter more romantic world of his imagination and this may well be the secret of his appeal. Perhaps Leeds’ trams never were so vividly scarlet or canal waters quite so blue, if blue at all, but we wish they were and in these canvases we escape into a place where they can be.

By no means does he fit into any kind of established pattern of the typical artist. He does not have a studio and sometimes paints, using oils and acrylic, in his gazebo. It is impossible to place him in any strict genre and he belongs to no school or coterie of painters. He does not possess a passport, having no wish to travel abroad in search of inspiration when he can find it in his beloved Yorkshire, very often on jaunts in his camper van. He is quite frank about the use he makes of photographs. ‘I take photographs for reference purposes but my pieces are not photographic and I don’t paint the obvious.’ In search of historical veracity, he will spend hours in research.

His background and diverse experiences, again, seem very untypical of his calling. His first job after leaving Leeds Modern, the same school attended by near contemporary Alan Bennett, was in insurance which he hated. During National Service, in the RAF, he trained as an air wireless mechanic and later became a teacher. Eventually in his forties he took the gamble to try his hand as a commercial artist, having originally been inspired to paint by the Impressionists.

Pete Lapish is an artist who though rooted in Yorkshire has a universal appeal. In the coming weeks, I will be discussing some of his paintings, the ones which have a particular poignancy for me, although I confess I just about adore everything he has put his name to.

His work may be seen on: https://petelapish.art.