Of Blood And Bone: When I Think Of My Body As A Horse By Wendy Pratt 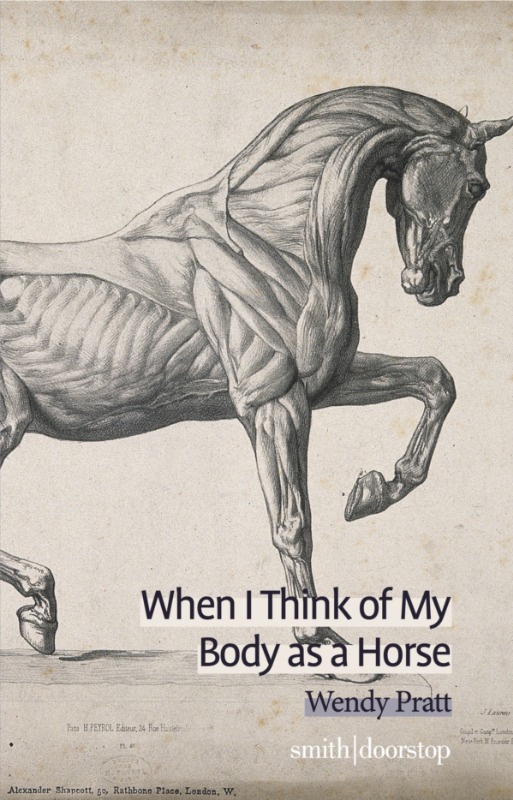 I couldn’t pretend to fully apprehend the terrible emotional ramifications of the loss of a child, but I do know that tea and sympathy don’t cut it as panaceas. The kind of experience that informs the major theme of Wendy Pratt’s latest collection of poems is too painful for most of us to assimilate, yet, acting as a kind of interpreter, she gives depth and meaning where propitiatory words might otherwise fail. Continuing, to some degree, where Gifts the Mole Gave Me left off, the writer has grown into her bereavement to create a matured poetics, not of detachment or even accommodation – she remains viscerally connected to this memory – but of wisdom and astonishing insight.

And she always knew where she stood in relation to consummated motherhood, to the reaction of others to her grief, to an understanding that withers into a facsimile of concern because it is not an understanding at all. The presence of blossoming maternity acts to diminish and ironise the self-worth of those in whom the impulse cannot be fulfilled. The pain of recognition, redoubled by the contrast, is impossible to imagine. Formed in self-protective bastions like cavalry, ‘The Circle of Sisters’ is both coven and cognoscenti, as the bereft narrator looks in from the cold in an act of biological mimesis which is both hopeless and defiant:


‘I became an embarrassment. I was no longer
a sister of the circle, but my body
couldn’t forget their dance, so I danced
in the shadow of my sisters, and shouted
my daughter’s story through the gaps.’


The sibilance of these final lines is heartbreaking: binding a lullaby for loss with a sense of abandonment, Pratt’s solitary dance is a miraculous expression, also, of liberty in enchainment, like Dylan Thomas’ sea-bound singing, an admirable declamation of endurance and survival.

The daughter both was, and never was, in this poetry of conspicuous absence. Wendy Pratt fills the vacuum with words, making wholes in a tangential universe where the child can and cannot exist, creating something tangible, something to hang on to. ‘Schrödinger’s Baby’ is an expert inference of parallel ‘otherness’, insinuating another sense of being, of a life unlived, from IVF to the ‘flat-lining’ of a negative pregnancy test, from ‘unworn nappies’ to the escape mechanism of daily boozing and running. Seeing herself from outside, detaching herself, the poet finds a metaphor for an underworld of numbing pain in the half-space occupied by the image of the loved object:


‘Schrödinger’s baby’s mother
escapes in a tide of grief in which
she is both alive and dead also,
and there is never an answer to anything
and the box is too small for this half-life.'


It is remarkable that the Geiger Counter of Pratt’s memory never overwhelms her capacity to translate the dynamic of intense emotion into words that remain catastrophically affecting. Reading her poems, I am reminded of the graph writing machine that goes off the scale, or the centrifuge that tests to destruction, but formally controlled, as if the drama might winnow her audience in the updraft. And so it does. Rendering feeling and intuition as much as recalled observation, the poet makes us party to the bi-polar extremities of pregnancy, the surreal, near-comedic, giddiness of instinct and ridiculous happiness. Pratt’s account of becoming in ‘Nesting’, performs a service to the lunacy of emotion by which it is characterized. And it is acute: realised as though it happened yesterday, she nails the feeling in brave and brilliant juxtapositions:


‘I travelled on the Earth’s magnetic pull.
I swam along ley lines, my uterus
was the oil-filled, domed receptor
of a sperm whale, nestled in the bones
of my pelvis, it echo-located the labour moans
of the women who had come before me.’


The call of instinct, which will be stymied by another biological reality in the most crushing of the book’s ironies, is one consanguineous thread uniting all that has occurred, and will recur. The formal arrangement of Wendy Pratt’s poetics settles into a mantra of varying metrical tempos and repetitions. Here, the palpable uplift of succeeding stanzas is reinforced phrase by phrase like a drumbeat, whilst elsewhere, the embryonic runner emerges into the light in the purposeful, self-sustaining rhythm of joyful, equine freedom. (‘Marathon Training’) 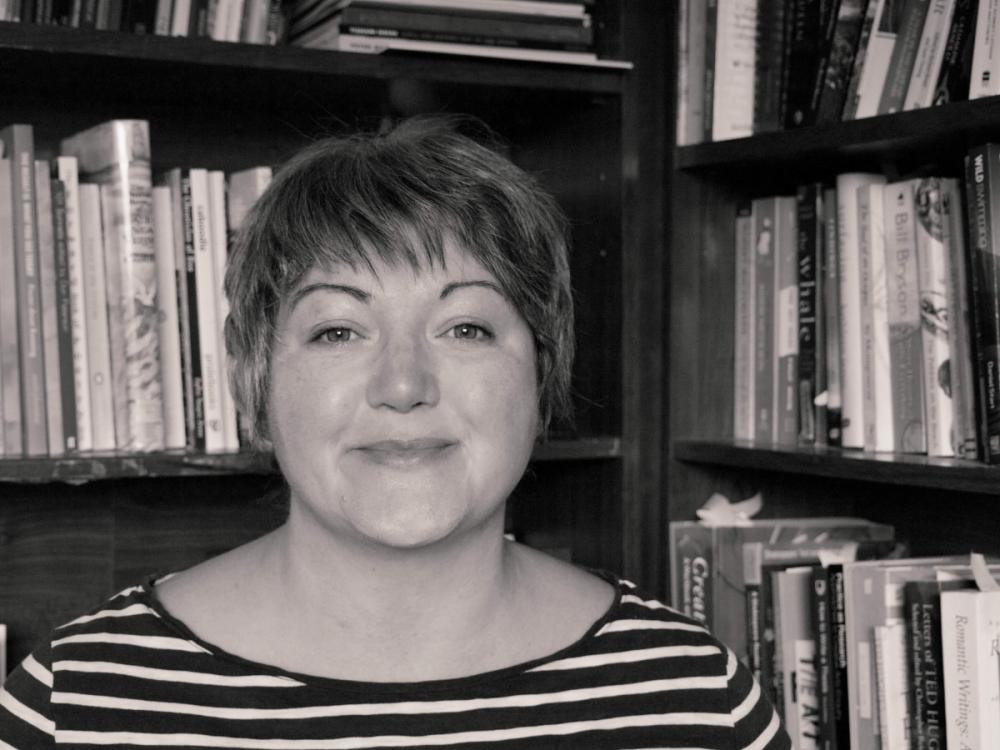 Wendy Pratt
Not that her preoccupation proscribes other, unrelated reflections: Pratt’s glass is prismatic, not binocular – we are not viewing the world through the eyes of one whose poetry is defined by a single experience. There is much of real beauty here; the poet combines startling insights and a, sometimes, forensic intelligence that does not demur at the volte face or the on-point shock. But most, there is a connection with the blood and the animal, bound up, often, with the idea of necrotic decay and its counterpoints, birth and re-growth. Identifying, at a visceral level, with the organic world, finding fellow-feeling and supranatural affinity in the sanguine and the driven, she is animated, even shaped, by the figurative suggestion of insentient forces:


‘From the roosting bats I learned
that even in a pitch-black attic
of suitcase-safe memories,
a whole dark-hearted life might erupt
pulsing from the smallest cracks.’ (‘What I Learned from the Animals of My Childhood’)


The inference of seepage, of a dark mental terrain into the present, is sparked by a passé early observation. As kids, we often visited a local museum in Huddersfield, and I was never less than morbidly fascinated by a horse in a dusty Victorian glass case, whose reverse side revealed the eviscerated interior of the animal’s body – the ribcage and tendons, the organs and bones. The gory intrigue was half Damien Hirst, half Gunther Von Hagens, and the scene would remain in the mind’s eye for days afterwards. The cover of Pratt’s book gives vent, rather, to both identification and obsession, and we are left in no doubt that her sense of animal energy, of freedom bought at the expense, even, of rationality, is informed by the ‘blood and bone’ of creation, anxiety and biological dissolution. Drawn anthropomorphically, the poet’s tone need never be less than defiant, or willing to be becalmed, like a broken horse:


‘Because you were patient
and let me run and let me buck
and kick and show my teeth
and weren’t fazed by it.’ (‘How You Fed Me Like a Wild Animal and I Let Myself be Tamed’)


Or, peering into another glass case at a ‘mermaid’ (‘Self-Portrait with Maritime Museum Mermaid, Hull’), the observer is briefly subsumed into suspension of disbelief by the carapace of persuasive sleight-of-hand that resembles her own social and cultural equipage – the ‘wire and fakery’ of public topshow. Pratt’s view is reflective, conditional, not circumscribed by the demands of satire and credulity, like Cliff Forshaw’s poem on the same exhibit (‘Authentic Victorian Mermaid’). The ‘withering’ of the mermaid in a box is a figure for that sense of unutterable loss which is clinically delineated in the profoundly affecting ‘Diagnosis’, and drives Pratt’s narrator to the cusp of defiant despair in the harrowing of ‘The Last Egg Collection’ – ‘I am done’. In ‘Self-Portrait’, the final poem of the book, the mood is not vitiated by platitude. There may be a kind of resolution, but it is sidestepped by the amniotic abandonment of metaphor:


‘My husband cries, finally, over our lost babies.
We hold hands. I am swimming away.’

Also by Steve Whitaker...
Poem Of The Week: 'Vanitas Vanitatum' By John Webster (C. 1580 - C. 1632)‘Those Things We Do Not Say’ : All The Beautiful Liars By Sylvia PetterPoem Of The Week: 'Blood And Lead' By James FentonPoem Of The Week: 'The Urine Specimen' By Ted KooserBitter Fruit Ripening: The Kilt Of Many Colours By David Bleiman
That the shadow of loss does not hang over the entirety of her narrative suggests stoicism and inordinate focus. But everywhere, in this ambiguous and in many ways complex collection, we hear the narrator’s own state of mind echoed in the observed present; her existence marginalized by brutal experience, she is reduced in scale, made tangential, washed up ‘on a grey metal shelf / in the industrial dark’ (‘Dildo-cam’). Her depictions of the condition of emptiness flay the epidermis as effectively as Plath, and enact the incarceration of grief as overwhelmingly as the Tennyson of ‘In Memoriam’.

And it is well, amongst the regret, the remorse, and the layers of self-laceration, that we find leavening poems of the picaresque and of the parti-coloured ordinary. Pratt’s celebration of unfolding existence in the wonderful, and authentic ‘Love Letter to Scarborough on a Saturday Night’ is exactly what its title presupposes. For life too must continue, in despite:


‘You are first light, littered streets,
runners on Marine Drive,
coffee, smudged mascara,
a hard come down, stomach hollowed,
you are nineteen-year-old me.’


When I Think of My Body as a Horse is a monumental achievement.

When I Think of My Body as a Horse is published by smith|doorstop.