Nothing Stays Secret Forever : The Cliff House By Chris Brookmyre 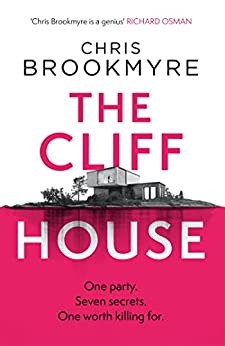 Whatever you may imagine when you think of a hen weekend, my guess is, this isn’t it. In the case of The Cliff House, the hen weekend is for Jen, a successful businesswoman, who is about to marry Zaki – well, maybe. She has doubts but hasn’t shared them with anyone yet. Her first husband, Jason, a policeman, disappeared when incriminated in criminal activities. His treatment of her had shattered her confidence in men.

Jen’s guests are a mixed bunch of old friends, new friends and family, including Jason’s embittered sister, Beattie, and Zaki’s younger sister, Samira, mother of twin babies. Jen’s longstanding friend from childhood, 42-year-old celebrity singer Michelle, is there but discovers that fame means nothing in these circumstances. There are tensions between the girls, not least between Michelle and Helena, another old friend of Jen’s who used to be part of Michelle’s group, Cassidy, until Michelle dropped her to pursue a more lucrative career as a solo artist. Helena has never forgiven her; now a music teacher whose husband has left her, the hurt is exacerbated by the fact the two had been best friends since early childhood. Add Kennedy a young tennis coach, Lauren who owns the mansion and Nicolette, a fashion designer and it’s quite a mix. Grudges surface, old and new, and the dynamics between the women set the scene for drama.


...don’t believe you have all the answers, until the end.
The venue is a luxurious mansion on Clachan Geal, a remote Scottish Island. It is a retreat which has all the trimmings including a spa and a six-hole golf course, and the weekend could be just what these girls need. Initially, there is an expected amount of squealing and giggling and there promises to be plenty of booze but that’s as far as it goes. The weekend takes a bloody turn and nerves are quickly shredded as they discover that luxury is meaningless when everything is reduced to survival.

Think Agatha Christie’s And Then There Were None and you begin to get the premise of this novel. On the first evening, after cocktails and before dinner, a murder is discovered. Then one of the girls goes missing. The Wifi has been tampered with and the boat – their one means of escape – is no longer tethered to its mooring. They are trapped with no means of communicating with the outside world. Then comes the strange message from ‘The Reaper’ telling them the life of the missing girl lies in their hands, that one of them has a guilty secret and must pay reparations. The problem is they all have closely guarded secrets (often best kept that way) and the situation forces them all to contemplate the sins of their past. Whose is the biggest secret? None of them wishes to make the revelation – which has to be public - and no one knows to whom their tormentor is referring. They say confession is good for the soul, however, and in this case, it’s the price of freedom. The psychological thrill lies in not knowing who is controlling the narrative.

lThe dangerous situation the kidnap victim finds herself in has echoes of a famous Edward de Bono lateral thinking problem which so baffled us in the ‘eighties – the hanging man, the locked door and the pool of water – and the reader shares the tension felt by the girls who know that their time is limited if they wish to save their friend.


Whose is the biggest secret? None of them wishes to make the revelation – which has to be public - and no one knows to whom their tormentor is referring.
The music playing in the background sounds a discordant note and Brookmyre is not subtle, although the girls are slow to pick up on the message. ‘Secret’ and ‘She Knows’ are just two of the tracks played on repeat – the lyrics are a clear message to someone. As each of the players picks up on a track significant to them, it is clear that music is a powerful influence on the mind. How true!

The pace quickens once the women divide into three pairs to search for the kidnap victim. No-one wants to be left alone but Kennedy, injured, is the least fit for a hike into the unknown and remains at the house as look-out. The chapters jump between the pairs in an unsettling way since the reader does not hear the whole of each story at once; the secrets (and reactions) are shared, in fragmented fashion. The unravelling of secrets gives rise to theories and suspicion – all credible to the reader. The description of the domestic abuse suffered by Jen at the hands of her first husband is menacing and wholly believable – that’s the terror of it. That, and the belief for the victim that there is no way out. The guilt felt by them all, for the hurt they have caused by previous actions, affects them. All the women are guilty of something, yet all are victims, too. Things are rarely simple. The pace quickens still further when they regroup, share their thoughts and eventually discover the identity of ‘The Reaper’.


All the women are guilty of something, yet all are victims, too. Things are rarely simple.
There is occasionally some awkward dialogue; affected language, odd abbreviations and a few examples of Scottish dialect but, as much of the characterisation is revealed through the dialogue, the oddness of some of the lines, whether intended or not, is just, perhaps, another jarring note for the reader; no one can relax.

I could have entitled this review ‘The Nature of Friendship’ since the focus is definitely on friendships, trust and truth, or I might simply have called it ‘Search for Justice’ – whatever form that may take. The reader slowly begins to appreciate a greater depth to each of the flawed women as they are revealed in their true colours. I didn’t guess the culprit, nor all of the secrets, but strangely, there were no surprises either, although the final pages have numerous twists; don’t believe you have all the answers, until the end.


The Cliff House is published by Little, Brown