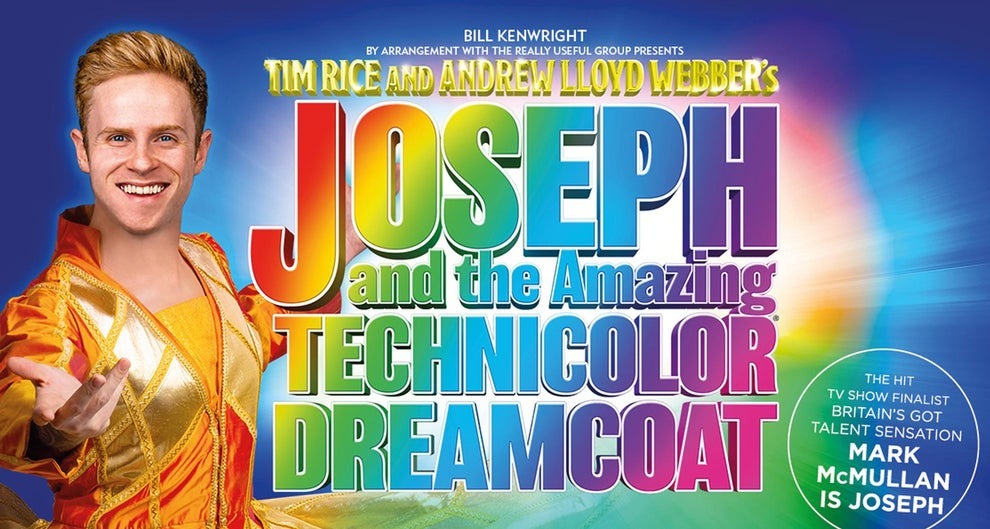 Considering that Joseph and the Technicolor Dreamcoat has successfully been pedalling its wares since 1968, I think it is fair to say that reviews can no longer be about the musical, more about those nervous actors who are charged with stepping into the main roles!

How do you judge a libretto, score and production in its own right when audiences, the ultimate critics, have been returning time and again for more than half a century, to watch this light-hearted, feelgood look at the Old Testament?

It is a given that they already love the Webber / Rice score and libretto in their own right; they are merely there for a top up of feelgood optimism…….or to judge the latest ‘victims’!

The potential victims, of course, are those players charged with carrying the Webber Rice torch in the same way that so-called big names line up to play Shakespeare’s heavyweight roles: Hamlet, Othello and the rest. The Bard will never be judged, just those who dare to cock up his lines, however famous, because the public already know Will’s plays inside out!

And so it is with ‘Joseph’. This time it was the turn of Mark McMullan in the title role, award-winning finalist from Britain’s got talent. However, read between the lines, and you quickly realise that whilst being ‘discovered’ he already had some considerable experience / TV exposure as well as a great set of pipes.

I actually feel that the Britain’s Got Talent tag, whilst necessary to pump the hungry Cowell PR machine, is actually the thief and not the other way round, simply because here’s a lad with a wonderful singing voice; he was great before BGT ever ruled that he was.

His was a fine voice and, whilst he is still relatively inexperienced, he showed incredible maturity on stage, and it is little surprise to read that he played the lead role of Joe Gillis in Sunset Boulevard.


Also by Phil Hopkins...
Sondheim Would Be Smiling On LeedsFarewell Mr Bond – Your Time Is UpSensitive, Hilarious & Emotional – Poet’s Take On DementiaOverblown But Enjoyable - Spirit Of The DanceA Dignity That Outwitted The Holocaust
But, move over McMullan for at his side was another ‘newbie’ Alexandra Doar in the hugely demanding role of the Narrator. Fresh out of drama school she had the voice of an angel – no pun intended – and the confidence of a porn star high on Viagra. She is tailor made for Eliza Doolittle, Mary Poppins and a raft of other iconic female roles and the world is her oyster.

This Bill Kenwright production – telling the story of the Old Testament in a somewhat glossy and appealing way - was clean as a whistle: well lit, smooth in its scene changes and quite simply a well-oiled machine honed carefully across five decades.

Other character highlights included Henry Lawes as Pharaoh – the wonderful Elvis contribution – and it was nice to see local Bingley boy, Bradley Judge in there as one of the brothers, Dan.

Last night there were no apples, pears, rotten cabbages or other biodegradables hurled for the ‘mob’ judged this a good ‘un. McMullan and Doar past the test, carried their cast members well and live to survive another day. We await the next X Factor Joseph. Any takers for 2021?