“Love Is The Magician That Pulls Man Out Of His Own Hat”: A Marvellous Light By Freya Marske 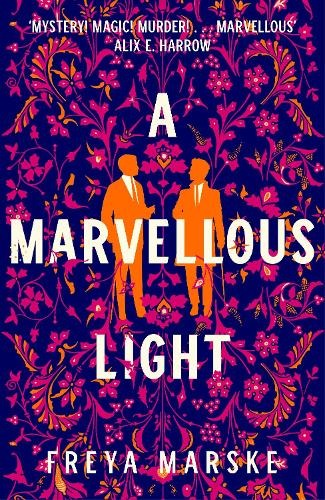 If Freya Marske’s debut novel were a cocktail, it would be both paradoxically delicious and delightfully moreish. A cornucopia of ingredients, deftly stirred so as to transcend the merits of its individual components and become an esemplastic feast for the senses. The recipe might at first glance raise a cynical eyebrow yet from the first sip, dextrous literary accretion acts an invisible dynamic agency producing something truly magical.

Our young baron epitomises a finessed sense of noblesse oblige, charismatic moxie and athletic vim, yet he finds himself accidentally appointed as a parliamentary liaison in the Office of Special Domestic Affairs and Complaints
Our literary mixologist has given her reader an intoxicating and rather decadent admixture, blending Romance, Fantasy and Mystery genres, whilst infusing all with Magical Realism and carefully fragranced undertones of gothic peril. Giving the drink its elegant body is a marvellously modulated splash of Edwardian panache, all topped off with a heady note of erotically-charged contextual taboo ! In place of an olive languishing in our frappé chilled coup, Marske has dropped in contemporary thematic resonance, lending her exquisite concoction a layer of artfully distilled complexity and sharpness.

Ut supra, a synopsis of the book’s plot might not suggest a particularly quaffable beverage, or at least only awaken the taste buds of a niche audience. However, I can enthusiastically report that my first impressions were entirely mistaken and what threatened to be either derivative or stylistically mimetic proved to be a scintillatingly original and entirely satisfying exercise in architectonic bravura.

We meet Sir Robin Blyth, a young Edwardian aristocrat shackled with responsibility for his family’s now woefully neglected estate, and his own unmoored sense of purpose. Our young baron epitomises a finessed sense of noblesse oblige, charismatic moxie and athletic vim, yet he finds himself accidentally appointed as a parliamentary liaison in the Office of Special Domestic Affairs and Complaints. A dull administrative role albeit with access to the Prime Minister himself, soon proves to be the source of potentially lethal peril as he falls Alice Through The Looking Glass-like into the hidden world of magic, and those who practice incomprehensible ensorcellment.

Confronted with the mysterious disappearance of his predecessor, Robin encounters both the beauty and the ugliness of a magical world hiding in plain sight, its practitioners secretly woven into society’s quotidian fabric rather like serpents beneath elegant floorboards. As Robin delves into the disappearance of his role’s previous incumbent, he becomes the target of ruthless forces in search of answers to their own nefarious riddle. Magically cursed, Robin’s previously banal life begins to unravel, and his demise seems both painful and certain.

One aloof, bookishly cerebral man stands between Robin and the malevolent magicians orchestrating his demise, Edwin Courcey - his magical society counterpart. Though part of a well-to-do family of gifted magicians, Edwin finds himself on the periphery of respected society by dint of his possessing little magical power and a rather too dysphoric persona. Like Robin, Edwin is a misfit performing a role he despises, alone and without connection to anyone or anything.

The two unlikely allies have been thrust together by capricious fate and only mutual adversity can unite them. Together, they must learn to trust the other, with meddlesome fate playing both Cupid and conspiratorial Nemesis. A queer romance tentatively blossoms amidst societal prejudice and omniscient enemies as the amateur sleuths battle clandestine foes and their own entrenched, but repressed cacodemons.

Slowly drowning in the abnegation of their darkest wants and unseen persecution at the hands of powerful adversaries, the antithetical couple embark upon a journey that leads them to discover their own identities, and their true callings.

Marske has given her effervescent romp real elan by sedulously mining obvious literary erudition. She has taken the trail blazing brilliance of Susan Cooper’s The Dark Is Rising as her touchstone, eschewing the tropes saddling J.K. Rowling’s Harry Potter novels with melodramatic hoodoo. Realism dances with Fantasy, the two performing a delicately sensual tango saturated with sexual tension and furtive longing.

Short chapters keep the reader’s attention nailed to the page and Marske skilfully uses her lead characters to engage the reader’s vicarious senses.
Setting the novel’s magical mayhem in 1908, has allowed Marske to give her own book historical verisimilitude, whilst also enabling her to deal with her homosexual romance theme. The callous anti-aestheticism unleashed by the trial of Oscar Wilde catalysed innumerable icons of the Edwardian period to be unashamedly didactic in their fiction and the influence of E. M. Forster can be seen in Marske’s work.

Forster’s Maurice, though published posthumously in 1971, was written between 1913 and 1914, five years after the events of Marske’s novel. Forster was an admirer of the poet, philosopher, socialist and early gay activist Edward Carpenter and following a visit to Carpenter’s home at Millthorpe, Derbyshire in 1913 was inspired to write Maurice. The cross-class relationship between Carpenter and his working-class partner, George Merrill, presented a real-life model for that of Maurice and Alec Scudder.

The Edwardian era often evokes images saturated by stylish opulence, closely observed etiquette and venerated aristocratic pomp, yet beneath its sartorially finessed surface, frenetic technological change was afoot, cruel societal evils plagued its soul and repressed passions furtively bloomed in the shadowy corners of ‘respectable’ society. Marske, like Forster delves beneath the glamorous surface to disinter ugly and beautiful truths. Magic, like homosexuality, is liberated from the shadowy environs of intolerant prejudice and explored without trepidation.

Marske has taken Forster’s literary model and replaced classic D. H. Lawrence class distinction with the possession, or none-possession of magical abilities. She has maintained the sensitive elegance of Forster, but added to that her own irrepressible Wilde-like wit and love of contemporary Fantasy fiction. With another bold piece of literary legerdemain, Marske has also gilded her story with subtle gothic allusions to Poe echoing his William Wilson short story as a backdrop to Edwin’s relationship with his elder brother Walt. These literary references are never conspicuous, but they caparison the book with gossamer-thin subtlety.

Turning to Marske’s technical bravura, it is important to state that whilst the book’s plot is stuffed full of intrigue, peril and suspense, this novel gains its power from the superb rendering of character and Marske’s facility for well-turned, velvet smooth prose:

“He could feel out the edges of the aching, yearning space in his life that no amount of quiet and no number of words had yet been able to fill. Edwin had no idea what he ached for, no real sense of the shape of his own future. He only knew that if every day he made himself a little bit better—if he worked harder, if he learned more, more than anyone else—he might find it.”

Robin and Edwin are perfect foils for one another. Robin is urbane, physically potent and gung-ho, though deeply romantic beneath his conspicuously masculine bravado. Counterpointed by Edwin’s epicene grace, reserve and apparent cerebral sterility, Marske exploits contradiction to evoke visceral tension. The unvoiced longing burning within our protagonists quite literally ignites the books often sexually graphic pages with beautifully articulated lust. Nothing gratuitous, nothing sensational, just two souls connecting and finding Forster’s ‘Connection’.

When all is said and done, Marske has exploited the quintessence of Downton Abbey and cast her ‘cradled’ spell as an Edwardian themed fantasy.
Short chapters keep the reader’s attention nailed to the page and Marske skilfully uses her lead characters to engage the reader’s vicarious senses. Though we have a profoundly androcentric point of view, our author has consciously ensured that the Edwardian period’s sensibilities are never deracinated in a bid to modernise her thematic treatment. Oddly, a patriarchal focus helps her to shock the modern reader by reminding us that society per se has not advanced all that much and that prejudice is perennial.

Thematically, we explore repressed longings, betrayal of oneself and the threat to wellbeing presented by insecurity and emotional insincerity. We also confront the battle between superficial reality and that which lies beneath, loyalty, courage and love. The weight of expectation is dealt with sensitively, as is the clashing of “the prose and the poetry”. Family and its conventions, lies and vicious celebration of status pervade the novel, as does personal integrity and the acceptance of self.

When all is said and done, Marske has exploited the quintessence of Downton Abbey and cast her ‘cradled’ spell as an Edwardian themed fantasy. Her novel is a glorious celebration of love, whilst offering us a richly imagined adventure soaked in lashings of artfully written eroticism. Floating effortlessly upon the erudition and intelligence of its author, It works as a novel because of its technical aplomb and its creator’s devout striving to give the reader didactic, unfettered entertainment. A truly magical book and the first instalment in what I fully expect to be a hugely popular trilogy.

A Marvellous Light is published by Tom Doherty Associates