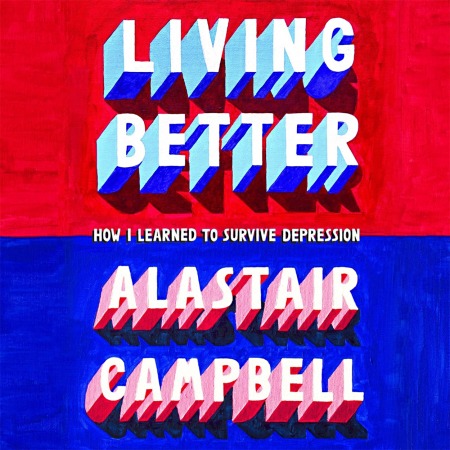 Strange that until today I thought of Alastair Campbell as the smarmy advisor to Tony Blair and I pictured him more in terms of how he was portrayed in the excellent film,The Queen, than in real life.

I rightly assumed intelligence but hadn’t thought of him much since he left the limelight, and certainly never thought of him as an author. Yet, when I picked up his book Living Better I discovered he has, in fact, already penned eleven non-fiction works and four fiction. He’s clearly been busy writing, amongst many other things.

He subtitles this book ‘how I learned to survive depression’, and it is certainly a departure for me to read something of this ilk even though I do love a good browse through the biographies and autobiographies.

To say it is merely fashionable to talk about mental health would be facetious, so I won’t. The benefits of talking about mental health are manifold as numerous people will now testify – publicly and often. I admit it’s taken me a while to realise the veracity of that statement. I was brought up in the north east of England at a time when you learned to take the rough with the smooth. As a family, we had enough but no more. Waiting for pay day to have shoes with holes in them replaced, was a reality but it was a close happy unit and as a child, I didn’t notice what we didn’t have; as a child, I gave no thought to how my parents might be feeling and it was not a thing they discussed - in our hearing at least.

I am lucky; I may have been fed up sometimes in my life, usually with good reason, but that’s just coping with life and what it throws at you. The black dog has never chased me. Knowing people, as I do now, who dread the approach of the suffocating black cloud, I have more sympathy, so it was with a keen and open mind that I started to read this book.

It is clearly a very personal book and I was pleased to read that Campbell had sought the permission of his family before going to publication. His wider family is clearly important to him and he to them. He had brothers, has a sister and cousins. He’s real. He values music - and the bagpipes! Who’d have thought it? Despite the name, perhaps because of the lack of an accent, I hadn’t even considered the Scottish heritage. Yet this kind of detail lends even greater credibility to what he is saying. His discussion of the effectiveness – or not - of drugs on psychiatric conditions, the mind exercises he describes, the advice he has been given which he shares, the scientific journey he embarked on, all make for a useful and informative read and despite its subject matter, it is highly accessible.

Alastair Campbell
Is the book also self-indulgent? Certainly. He is a self-confessed control freak and there’s a degree of arrogance evident. Cathartic? I would imagine so – and hope so. Do I admire Fiona for sticking with him? Definitely. Theirs is an enviably strong bond but it takes a strong woman and profound love to stay in such an environment. Amongst other things, how she stopped herself from throwing his phone into the sea when they were supposed to be on a family holiday, during his Downing Street tenure, I do not know - a friend of mine one year put a stop to the hounding of her husband by his boss by doing just that!

I would advise you not to read it at night and I certainly could not read it in one, two or even three sittings. I read it on each occasion until I had to put it down and do something else. It is not light reading although there are occasional amusing cameos, not least Campbell’s mother’s telephone call with Tony Blair. Famous names drip from the pen and in some cases, their most human qualities are revealed. Campbell has learned who his friends are and is grateful that he is not defined by his condition.

It is enlightening to learn that someone like Alastair Campbell can function at such a high level, in such a pressured environment when those around him have no idea that the smile is forced and the will to carry on is all that is driving him. How many more people sadly fear similar discovery? He has lifted the lid on his depression. Some will read it and be grateful that their struggles are not so bad, others will realise that they are in good company and some will appreciate the insight it affords. The life-saving jam jar may be useful to us all at times. We may all benefit from this book. I hope Campbell does too, and that one day he comes to experience what his mother termed ‘contentment’.

I may not be able to empathise but I can at least sympathise more easily with the pain of depression, not only the way it affects the victim but also those around them, such as Fiona and their children, who have to live alongside the black dog – if that is not too superficial a term for it.

I was asked to read this book by some one close, who knows what it is like to be overcome by irrational dark moods, and I am glad I have done so. Thank you, Alastair, for sharing.


Also by Artis-Ann ...
The Greatest Doublecross In The History Of Espionage: Our Friends In Berlin By Anthony Quinn‘Goddesses, Housewives Or Whores’: Women Of York By Claire Shaw‘You Have To Know Your History If You Want To Put Things Right’ : Charity By Madeline DewhurstPractise To Deceive: Transcription By Kate AtkinsonJamaica Inn By Daphne du Maurier - A Review