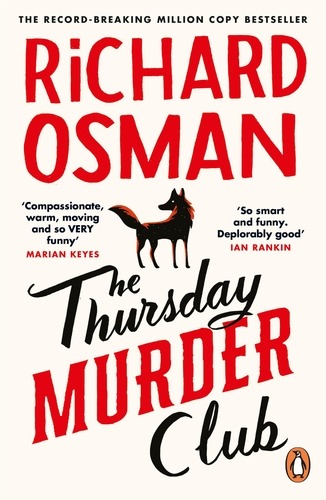 (Well, actually, I couldn’t remember but I looked it up and it was published in 1996 and I know I got it in my Christmas stocking when it was first out.) To get back to the point, however, page one of Thursday Murder Club did it for me and so many times thereafter, with its (often understated) humour and witty observation.

I like books set in the war. I like a good murder mystery. I like fact interlaced with fiction and often, given the historical periods I tend towards, it’s understandable that they are not particularly funny. So this debut novel from Mr Osman, better known for his television appearances on Pointless and the like, was a breath of fresh air. And I placate myself with the knowledge (at least, I read it somewhere) that he based the setting, an upmarket retirement village called Coopers Chase, with its “contemporary upscale restaurant” and its residents, on the place where his mother lives, so, they are real people…well, maybe: “You can’t move here until you’re over sixty-five, and the Waitrose delivery vans clink with wine and repeat prescriptions every time they pass over the cattle grid”. In the words of the latest resident to join the fold at the end of the novel, “I could get used to this”.

The voice of Joyce is clear and endearing. Alternate chapters (almost) record her account of events and her thoughts, and the throwaway details she includes are hilarious (although, at home, we used to have shepherd’s pie on Tuesday, not Monday) and sometimes a little poignant - “[Her daughter] gave her a proper hug because they were in company” did tug at the heart strings a little. The detail throughout is neither banal nor trite but provides characterisation and authenticity. I have come to love Japanese Opera! You’ll have to read the novel to understand what I mean.


The reader quickly makes friends with the principal characters: Elizabeth, Joyce, Ron and Ibrahim. Their little quirks – and secrets – are natural...
The highly credible conversational tone lulls the reader into a false sense of security and Osman’s attention to detail is inimitable, even when he offers directions around the more scenic local routes.

The reader quickly makes friends with the principal characters: Elizabeth, Joyce, Ron and Ibrahim. Their little quirks – and secrets – are natural; they are real people, albeit on the page. Like PC Donna De Freitas, I engaged with them very quickly. What has happened to me? They are residents of a retirement village for goodness sake, but underestimate them at your peril.


The four intrepid sleuths work in tandem (well, that is a bit of a stretch) with DCI Chris Hunt and PC Donna De Freitas...
The Thursday Murder Club meets in the Jigsaw Room in “the two-hour slot between Art History and Conversational French” – needless to say, on a Thursday. It comprises four sprightly, energetic and inquisitive people: the gentle, chatty Joyce, a former nurse with a reputation for getting things done; organised and inventive Elizabeth, or is that Marina, with access to all sorts of sources of information. Her past is shrouded in mystery. Ibrahim, the retired psychiatrist whose secret of eternal youth is ‘pilates’ and Red Ron, with a West Ham tattoo on his neck who was once the scourge of the bosses in their battles with the unions; he always supports the underdog and still enjoys a fight. These four revel in solving puzzles, cold case murders to be precise, provided originally by Penny, an ex-policewoman and friend of Elizabeth. Each of them brings their own particular skills to the conundrum, until one day, they find themselves embroiled in a real life murder case – even though the victim was something of a “wrong ‘un”. Greater excitement ensues when the case quickly involves multiple murders. Victim number two wasn’t a particularly nice chap either, being an avaricious businessman with no soul, but did he need to die? And as a bonus, they all witnessed it – even though they saw nothing! Thankfully, on this occasion, there are no particularly gruesome details, it’s not that kind of novel.

The four intrepid sleuths work in tandem (well, that is a bit of a stretch) with DCI Chris Hunt and PC Donna De Freitas, the Fairhaven police officers who are appointed to apprehend the killer or killers, but there is no doubt that the work of The Thursday Murder Club is most helpful. They appear to make slow progress but on reflection, the reader has been given plenty to go on. Subtle hints and nuanced observations all become clear at the end. The reasons for murder are all there: love, justice, revenge, greed; as you can guess, the intrepid quartet dig up rather more than anyone bargained for.


The highly credible conversational tone lulls the reader into a false sense of security and Osman’s attention to detail is inimitable...
Various other characters are introduced and all are well drawn: Elizabeth loves her husband, Stephen, who is regularly dosed with powdered temazepam but when alert, plays a mean game of chess; Joyce wants to help her friend, Bernard, a retired professor, who sits alone on a bench all day with a secret he won’t share even with her – at least until he has no choice; Jason might have been a tough boxer once but events prove he still needs his dad and nowadays can use his charm as well as his left hook; Father McKenzie has not, on this occasion, buried Eleanor Rigby but has played an enigmatic role, the truth of which is eventually elicited by the team. Bogdan is at first inscrutable but despite appearances, somehow likeable - and plays a mean game of chess: “you just have to make the best move”. There are more, not least Penny and John, but you can let them introduce themselves. As for Hunt (for whom this reader felt more and more sympathy as time went on) and De Freitas, they make a connection but not quite the one you might expect.

I’m sure the four members of The Thursday Murder Club will appear in the next novel; I’d rather like to see Hunt and De Freitas there, too.


The Thursday Murder Club is published by Penguin