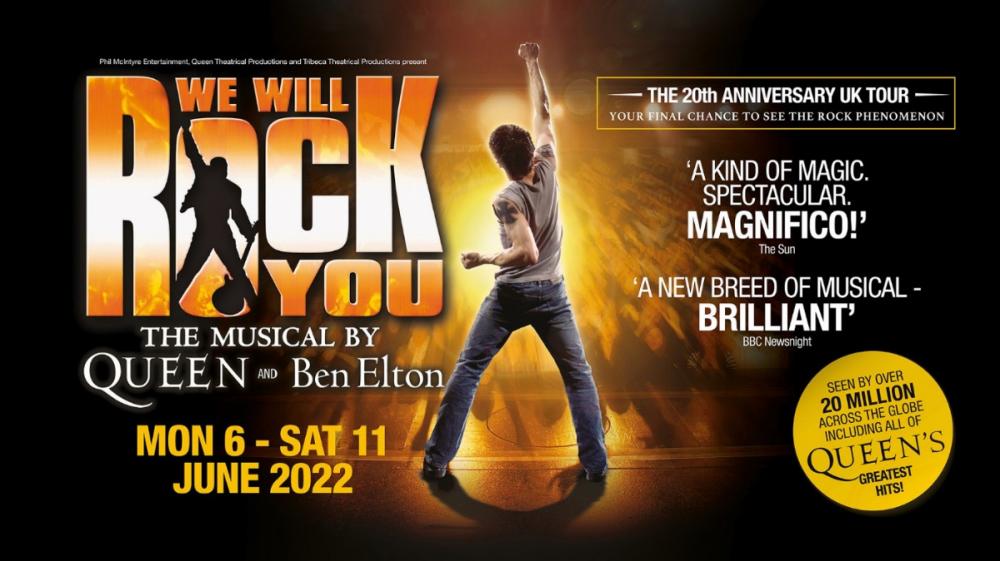 Queen and Ben Elton’s smash hit musical We Will Rock You is back for 2022 to celebrate its 20th anniversary with a new tour that arrives in the north. The worldwide smash hit musical arrives at Stockton Globe from Monday 6th June until Saturday 11th June before visiting Newcastle, Sheffield and Manchester.

Directed by Ben Elton, the musical has seen unprecedented success in theatres and arenas all around the world since it first premiered in London 20 years ago at the Dominion Theatre in May 2002.

The musical extravaganza featuring 24 of Queen’s greatest hits, which has been watched by over 16 million people in 19 countries. On the eve of the tour coming to the north I asked Michael McKell, who plays Cliff in the musical, what northern audiences can expect when they see the musical.

What is the musical about?

The story is set in the future where there is no live music allowed so a group of people break out to form a rebel group. The show has been directed by Ben Elton and this will be the third time I have acted in the show. In a way it should strike a chord with audiences as over the last two years we have had no live music due to the pandemic.

How many Queen songs are there in the show?

All the big hits are there, there are twenty four songs in total. I am very fortunate as I am the only one in the cast who saw Queen with Freddie Mercury in the band, I saw then five times including one of the Wembley shows. When we performed We Will Rock You in Portsmouth Brian May actually came on stage and played Bohemian Rhapsody! We have a great band on stage with us and the sound is amazing too, the songs are real genius and if you are a Queen fan you will not be disappointed.

How has the tour been going so far?

We have had very positive reviews and the fans seem to like the show too. We have got some fantastic singers in the show, Covid did knock out some of the performers but we have some understudies who stepped in, there is a lot of talent on the stage and I feel very fortunate to be working alongside such exciting actors and musicians.

Yes, it certainly does. I saw David Bowie on the Station to Station tour, he was the reason why I wanted to pick up a guitar. I was in various bands until I was thirty one years ago when I was involved in a car crash, after that I had to reinvent myself and began acting though I still write and record, I did an album in lockdown called The Last Picture Show which I enjoyed doing very much.

What would you say to people to encourage them to see the show?

I would say that this is a show that takes you away from everyday life, it is escapism really. You will laugh, you will cry, and you will definitely sing. At the end of the evening you will have had a very entertaining night out. It just makes me feel happy just talking about the show. There are twenty four talented people on that stage including brilliant dancers and singers plus in the live band we have Neil Murray who some of your readers might remember from the band Whitesnake.

There are plenty of opportunities to see the show in the north, come along and I think you will be very pleased with what you see and hear.

We Will Rock You appears in the north for weekly runs from the following dates: