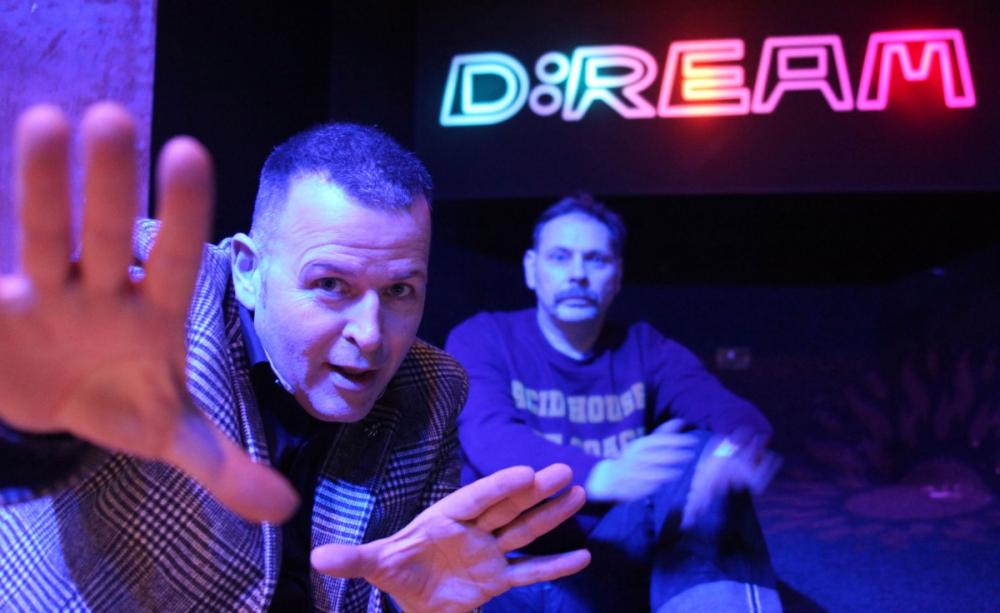 D:Ream took the charts by storm in the early nineties hitting Number 1 with Things Can Only Get Better both in Britain and around the world. Professor Brian Cox also played in the band whilst working towards his physics PhD before his successful television career.

Ahead of a new single release Pedestal, I spoke to Peter Cunnah and Alan Mackenzie from the group.

What is the inspiration behind the new single?

Peter: It is a unusual name for a song but it is all about idolising someone up to a point that you are blind to what is going on and you end up having an affair, the song has all the elements of romance in there as well as betrayal and hope set against a Balearic sound which Alan gave the track.

Is it harder now to get your music played on the radio?

Peter: Back in the early nineties we were part of a whole wave of new dance music coming through and our songs were played on Pete Tong’s dance show on Radio 1. Pete Tong would not touch us now with a barge pole as we do not fit his narrative and that’s fine, we do not need to be in that club anymore as we have grown past it.
With the internet we have got a chance of getting in touch directly with people who like what we do.

What was it like when Things Can Only Get Better became so successful?

Peter: We had been in the charts before that but the thing that changed everything around was going on tour with Take That then the DJ Paul Oakenfold rang me up and said he had just come back off tour with U2 and we talked about him remixing the song, the next thing I know is that we had 300,000 Take That fans buying the single along with our club fans and the song was climbing up the charts.

The song then came back again in 1996 to help what was then the re branded Labour party as they used the song in their election campaign. In hindsight I am not sure if that was the best thing for us to do. I have been politically homeless since 1997 as I do not support what the majority of them all do.

A lot of people do not know that Professor Brian Cox was in the band.

Peter: Yes, Brian was in the band for about the first two years when we were just exploding on the scene but in 1995 we had a tour coming up in Australia and he came to me and he said that he could finish his degree that summer and he would have to take two months out when we were in Australia, so I said to him that’s fine, your job is always going to be here so I would not worry about it.

After that he went on to become incredibly famous. It was quite funny as on the tour bus I was reading a book on Napoleon, our backing singer was reading OK magazine and Brian would be reading all these physics books!

He has a great talent and I could not be happier for him, he is touring arenas and we are on the festival circuit but that’s the way it goes.

What has been the highlight of your careers so far?

Alan: Getting a Number 1 single has to be one but also getting our last album finished too which I was very happy about.

Peter: Having our singles become Essential New Tunes on Pete Tong’s radio show, the Number 1, going to gigs in helicopters, having an armed police escort to do a TV show, so many good times.

Have you been tempted to go out in tour with other bands from the mid nineties?

Alan: We are open to offers but we would not want to be just playing the old stuff as we are still recording and writing new material. To just go out and do the old stuff would be an empty shell to us.

Peter: The band is working how we want it to be now - we have full control of our career in how we produce the music, the videos that we do, which gigs we take on - which is mainly festivals. We are in the mind that if we could get something going with M People, K Klass and Alison Limerick that would suit us and would be better to take on tour but as Alan said we would have to be doing the new stuff to make it more fulfilling.