‘However Faecal The Treacle’ : Wild Horses, By Jordi Cussà 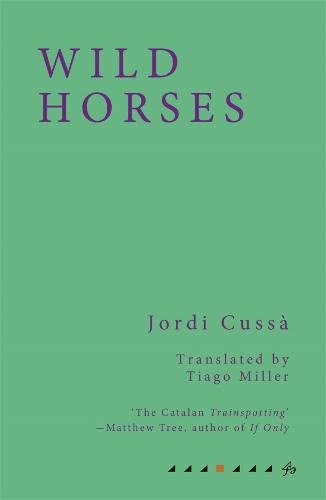 W. Somerset Maughan wrote in the summation of his Ten Novels And Their Authors, “In one way or another, I have used in my writings whatever has happened to me in the course of my life.” The oft parroted advice given to many a budding novelist is to write what you know about. Ipso facto, many novels have come to us as refractory mirrors of those writing them. The extent to which the waters of the well of lived experience are drawn is of course variable, and to some extent a moot point.

However, in the case of Jordi Cussà, though his first novel, Wild Horses is only partially autobiographical, the swirling ylem of its fabric has been faithfully harvested from its author’s drug-addicted youth. The words of Milan Kundera, when applied to Cussà, perfectly reflect both his literary method, and the materials he so artfully used to construct his debut –“The novelist destroys the house of his life and uses the stones to build the house of his novel”.


Before achieving literary lionisation in Catalonia, Cussà had been a drug addict and dealer swept up in the rampant tendrils of the drug epidemic that ravaged Catalan and Spain during the 1980’s
Cussà, (1961-2021) was a Catalan writer, translator and actor. Wild Horses, or Cavalls Salvatges in his native tongue, was first published in 2000 to immediate literary acclaim. Cussà would go on to write fourteen other novels and fifteen plays. In addition to producing numerous short stories, he translated the works of John Boyne, Truman Capote, Patricia Highsmith and Chuck Palahniuk into Catalan. The works of Yeats, Shakespeare and the lyrics of Bob Dylan, the Beatles and Leonard Cohen also found voice in his native language thanks to his assiduous, auriferous efforts.

Before achieving literary lionisation in Catalonia, Cussà had been a drug addict and dealer swept up in the rampant tendrils of the drug epidemic that ravaged Catalan and Spain during the 1980’s. “Saddled to the horse”, heroin had been both the irresistible agent of his own immiseration and ecstasy. Wild Horses was his attempt to capture and convey this youthful odyssey and do so as a fictionalised autobiography undergirded by the literary traditions he venerated, whilst being gilded in the fine cloth of linguistic innovation, albeit stained by potent Dirty Realism. Cussà’s novel was the first seriously literary attempt to address this subject matter and simply astonished both readers and critics alike.

The book’s translator Tiago Miller said in a recent interview, “Cussà’s great gift was to write about something truly ugly but do so beautifully…he found beauty in the underworld”. Miller went on to say, “He gave us a sublime novel, half adventure, half lethal tragedy as he simultaneously conveys the joy of being on drugs and the hell of being on drugs”. Cussa has one of his novel’s characters say, “the Utopia of day after day choosing my own dawns and dusk”. Another antithetical voice says, “it’s a devastating agony that empties existence of all the euphoria. Even that of drugs”.


Our novel charts the personal journey of our chief protagonist “Alex”, aka “Lex”, part-time disc jockey, barman, drug addict and small-time drug dealer.
To understand Cussà’s place in Catalonian literature, it’s again useful to turn to his dextrous translator: “He had been pigeonholed as an ex-junkie writer, but he is so much more. He drew on Greek classical literature and Shakespeare; he wrote epic stories”. Referencing Homer’s Odyssey, Miller said, “in Wild Horses, heroin has been presented as an alternative siren”. The reference alone gives you an indication of Cussà’s literary standing.

His novel is not a Catalan version of Kerouac’s, On The Road but a truly innovative attempt to convey - “Our superfluous generation floating between Utopia and No Future”, unable to “bear the weight of their own being”. As such, thanks to Fum d’Estampa and the profoundly intuitive, yet erudite efforts of Tiago Miller, English readers can savour what I believe to be an utter gem, albeit a rough read as it navigates amatory euphoria at one moment, before plunging us into the squalid tragedy of drug-addled ennui and dolorous personal destruction.


What gives Cussà’s book its ineluctable effervescence is the static electricity coursing through its every syllable...
Our novel charts the personal journey of our chief protagonist “Alex”, aka “Lex”, part-time disc jockey, barman, drug addict and small-time drug dealer. As his use and abuse of a cornucopia of drugs increases, his flotsam-like life floats upon an ever more fetid sea of crime, violence, casual sex, and self-destruction. The narrative is constructed much as a literary jigsaw puzzle as it conspicuously weaves into its substance the cynosures of those sharing Alex’s odyssey:

“We hardly knew each other at all, our external lives had merely coincided in time, within the Deadbeat’s Generation’s suicidal race, but in our hearts, in our souls, we were strangers in space with few structures in common beyond those days lived together”. It is perhaps apt to see Cussà’s semi-autobiographical account as a warts and all account of, “pathologically prolonged adolescence”.

However, as we intimately accompany a plethora of characters along their drug-strewn paths, the interwoven strands of their existence tell a more universal story - the plight of being alive and enduring the unknowing brutality of being sentient yet numb in the face of life’s apparent meaninglessness.

What gives Cussà’s book its ineluctable effervescence is the static electricity coursing through its every syllable - a combination of authorial detachment and technical bravura. Opprobrious censure of “the faecal treacle” constituting the novel’s substance is eschewed in favour of an entirely non-judgemental desire to simply convey events and their consequences.

Cussà does not moralise, he does not attempt to assoil his past, albeit fictionalised half-self or those sharing life “in the saddle” as they ride heroin’s wild horses. Cussà does not morally deracinate the person he was and judge that soul through chastened eyes, he simply presents the dirty reality of that existence sans platitudinous, hypocritical tutting.

In terms of literary style, Wild Horses almost defies categorisation much as its titular beasts resist being tamed. Joan Didion once said, “after a sentence or two you’re locked into a style for your whole book. You’ve already laid down the base line”. I can’t think of a better example of a novel defying this axiomatic pronouncement! Cussà draws on every literary trick in the book and invents more than a few of his own to tell his galloping tale.

We have multiple first-person narration often detailing the same event albeit from an entirely subjective perspective. These myriad notes act rather like voices in a choir, blending to enrich the melody’s every phrase with combined individual force. The lived experience permeating the novel’s pages takes a wide variety of literary guises with epistolic chapters juxtaposed against pages of free verse, unpunctuated stream-of-consciousness, and diary fragments.

Our narrator’s voice holds the shimmering cloth of the novel together as it provides an intelligible reference point from which to interpret all that surrounds it. The effect of this multifaceted literary expression is to bathe the reader in the book’s grubby reality, its sullied waters washing over our consciousness as an inseparable body of meaning.


From the off, our author tells us that his memory cannot be trusted...
In addition to inventive exposition, Cussà uses language as a magician her props. His linguistic legerdemain is far more than the artificed fusion of genres, or literary conventions. We have a bizarre but stupendously effective use of portmanteau words such as,“slopeydrunkblues”, “forevernever” and “tinkertampering”. Our rule-averse author gives us sentences drawing upon linguistic gymnastics for their power – “and everything will be just like a fairy tale; a fair is foul foul is fairy tale”. Even more inventively, Cussà has given his novel allusive intertextuality by including song lyrics and a virtual soundtrack of its own.

Chapters begin with song titles and their artist, almost as though the author wants the reader to absorb his own words through the mellifluous tones of those tracks he plays by implication in the background. This technique lends the novel’s events a contextual mooring, whilst also echoing the cultural cloth being woven sentence by sentence.

From the off, our author tells us that his memory cannot be trusted, and our sense of the novel’s reality is constantly punctured by metachronous incidents arresting the flow of its story. The effect of this uncertainty paradoxically lends the book its credibility. The reader is left in no doubt that its author was there and has the T-Shirt by dint of the haze through which we regard his fictionalised doings.

Thematically, self-destruction preponderates over all else. The invidious perils of addiction, the tragedy of overdoses, the cruelty of hepatitis, the callous claws of AIDS and the insuperable malevolence of suicide form a lethal cocktail of all-pervasive threat. Unmoored ennui seeps through the miasmic mists drowning our protagonists as they battle with quotidian life and the nefarious charms of drug-intoxicated escape. Human connection is explored, as is the very notion of life’s far from clear purpose.

Cussà echoes Beckett when his chief protagonist says, “from the Cosmos I have come and to the Cosmos I will return, and now in reality I understand I have been a cosmic experiment”. Wild Horses itself is an audacious literary experiment and one I am profoundly grateful Cussà conducted … I rode his wild horses and thankfully can dismount enlightened, but largely unscathed!