‘Goddesses, Housewives Or Whores’: Women Of York By Claire Shaw

The epilogue provides some thought-provoking questions which would challenge any discussion group and there is a useful bibliography for those who wish to use this book as a starting point to their studies. The chapters are chronologically ordered, with some overlap, and the information presented is clearly written and thoroughly researched, linking the occasional blue plaques which appear around the city with other sites, binding these women, most of whom will be unfamiliar, to the history of York.

Chapter One looks at the part played by Cartimandua, client queen to Rome, and it is not for the faint-hearted, offering, as it does, an overview of the role of women in Roman times. Archaeologists have discovered signs of love and servitude in Eboracum, the roman name for York.

Queen Ethelburga’s is a well-known independent school in Yorkshire but what of the history of its namesake? Read on to Chapter Two with its allusion to Game of Thrones. Anglo Saxons saw female relatives as valuable assets to be married off to seal alliances and Ethelburga viewed her marriage to Edwin as being her ‘duty to family and nation’. She was a Christian and eventually, he too, turned from pagan belief to Christianity and oversaw the initial phase of the building of the first York Minster. Ethelburga was the power behind his throne and could be said to be responsible for the growth of Christianity in this country.

And so we move on through the centuries and learn that young women often became nuns either when the family could not afford a dowry, meaning they could not find a suitable husband – or, out of choice, to escape marriage and the pain and danger of childbirth. This chapter becomes more exciting, however, as we learn that far from being pious, nuns could be strong-minded and devious, indulging in scandalous behaviour ‘super lapsucarnis’, engaging with lovers, enduring penance and even sending loaves of bread to local friars (make of that what you will!) before being brought to an untimely end by Henry VIII. There is surely a television drama to be found in there! 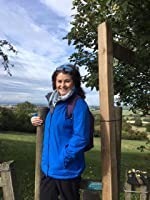 Claire Shaw
Margaret Clitherow features as a woman who was ‘largely uneducated’ (typically) but ‘with a readiness of speech’. At a time when it was increasingly dangerous to be Catholic, she hid two priests and when caught, refused to denounce her faith even though she knew the punishment: peine forte et dure. It took fifteen minutes to press the ‘best wife in England’ to death. Jennet Preston was convicted when the judicial system was rigged against the defendant: ‘The burden of proof needed to be found guilty of witchcraft was laughable’. The odds stacked against her were extremely high when she was accused of malefacia, even though it was a malicious prosecution with few grounds - echoes here of Arthur Miller’s The Crucible

Mary Tuke was the little known mother of York’s chocolate industry and proved herself an indomitable force against the all-male Merchant Adventurers. Influenced by her Quaker ethics, she began the philanthropic works continued by her successors. Mary Anne Craven was another strong woman, forced by circumstance to pick up the reins of the family business, who developed the Craven Confectionery business. Their strength of character saw them succeed in a male dominated society.

There is a role in today’s social media for ‘influencers’; It is not a modern construct since that is precisely what Elizabeth Montagu and her sister, Sarah Scott, tried to do in their different ways when they developed the blue stocking salons. Despite much criticism for being ‘over privileged meddlars’, these were two powerful women of their time; one a ‘capitalist entrepreneur’ and the other a ‘utopian social reformer’. They showed the resilience needed by women to not only survive, but to flourish in a patriarchal society.

These brief thumbnail sketches barely touch the detail Shaw provides but if interested, read on. ‘Women of the Bar Convent’ traces the activities of radical nuns who ‘ripped up the rule book’ and tried to break free of the cloisters and features particularly, Mary Ward, a religious pioneer, who believed that ‘women in time will come to do much’. She inspired Frances Bedingfield who established the Bar Convent and whose legacy may be traced well into the twentieth century.

Anne Fairfax survived the deadliest pandemic in history - smallpox. ‘A… woman whose character was forged through adversity’, kept the finest [Fairfax] house in England and entertained the elite at a time when York strove to become a fashionable metropolis. Her story clearly warrants a TV series to rival Gentleman Jack which followed the life of Anne Lister, ‘lesbian and diarist’, whose sexuality could have led to her being ostracised from society but who, as Shaw tells us, was fearless in her determination to run her own affairs (both business and otherwise) in a male dominated world.


Also by Artis-Ann ...
The Greatest Doublecross In The History Of Espionage: Our Friends In Berlin By Anthony Quinn‘You Have To Know Your History If You Want To Put Things Right’ : Charity By Madeline DewhurstPractise To Deceive: Transcription By Kate AtkinsonJamaica Inn By Daphne du Maurier - A ReviewFighting The Big Boys: Village Of Second Chances By Gina Hollands
Mary Ellen Best was York’s ‘most artistic daughter’, whose work provided a ‘valuable record of Victorian social history’, both English and European. Her achievements were remarkable especially given that she was denied access to the training afforded to male artists of her time.

The final two chapters are drier, factual accounts but again demonstrate the gender inequality which predominated historically. Generous women funded almshouses, religious houses and hospitals (not of the medical kind but stemming from the Latin word for hospitality), but these Benefactresses of York are ‘not particularly well-known or celebrated’ which raises a moot question: why not?

‘Prostitutes of York’ is not a salacious tell-all chapter but again focuses on the lack of gender equality in its description of York’s ‘underworld of disrepute’ where, to stop the spread of venereal disease, men in power chose to punish only the women, arresting them, merely on suspicion of prostitution and paying no attention to their customers. The chapter paints a shocking picture of Victorian prostitution in York ‘swarming with poor unfortunate girls’ who were not safe, it would seem, even from certain members of the police force.

I was loath to start reading this book because the font was so small but don’t let that deter you. Whatever your reason for picking it up, it is an interesting and informative read which certainly offers insights into the role of women in York. There is scandal, boldness and tenacity, enough to provoke outrage and sorrow, sadness and pride in the female of the species. There is a growing interest in 'Women's History' and the role of women in modern society and this book speaks to more than just the northern capital of our land.


Women of York is published by DestinWorld