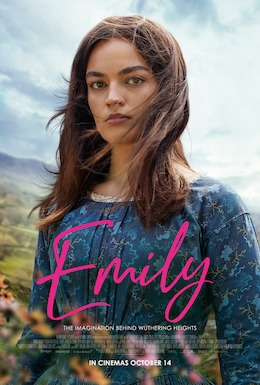 Forms of Art that play fast and loose with supposed biographical truth will always attract opprobrium amongst purists. And in amongst the generally approving reviews of actor and director, Frances O’Connor’s, latest film-making venture, we find a ubiquity of knee-jerk reactions. Predicated on distaste – it is noticeable that some observers have refused even to see Emily on grounds that the film is an affront to the sanctity of Emily Brontë’s memory – the commonest cavil relates to what is viewed as a departure from extant historical knowledge of the writer and her sparingly documented life.

The criticism seems as unreasonable and irrelevant as a strict historian’s take on Hilary Mantel’s Wolf Hall trilogy. The film and books are, as O’Connor and Mantel have both averred, works of fiction. The distinction is important: neither is intended to be faithful to what we know of Brontë or Cromwell’s experiences. And in truth, biographical detail is negotiable; what we do know has been interpreted, re-interpreted and reinvented to suit our own preconceptions over the intervening years. We cannot know; we were not present.

Suspension of disbelief is a precondition of cinematic engagement, providing its own corollary to the detachment of what we see on the screen from what we expect of historical accuracy – films are entertainment as much as purveyors of verisimilitude. And in O’Connor’s homage, we have a film of great depth and understanding of Brontë’s strangeness, her natural retreat from human affairs, and her near-misanthropic relationships, even with those she otherwise loved.

For Emily’s persuasiveness is in the building of an image of a force of nature: Anglo-French actress Emma Mackey’s performance as the writer is astonishingly visceral; her skilled interpretation of nuance, of look and demeanour, builds to a crescendo whose near archetypal otherness is a compound of animal instinct, innate power and witheringly smothered passion. The viewer is made privy to the making of a poet and novelist against the dramatic backdrop of Presbyterian cultural mores, Consumption and Cholera.

The camera belongs to Mackey, as it should. Not incidental but satellite, the other major players circle the ‘host’ figure in, by turns, supportive, admonishing and artistically receptive roles. The family representatives, played with conviction by an ensemble of Alexandra Dowling as a bespectacled, conventional Charlotte, Amelia Gething as a good-natured Anne, Fionn Whitehead as a recalcitrant and talentless narcissist, Branwell, and Adrian Dunbar in a subtle, half-pastoral, half-strictly observant turn as Patrick.


The narcotic pull of the hills and the elemental propensities of the climate inflame the silences between the words, allow the audience to conjure its own darknesses.
But Emily dominates the screen, and it is a testament to the scriptwriter and the actress’s research that character traits are nailed with brutal ease: the writer who would cheerfully wield her father’s shotgun is recreated here with a vengeful, defiant and, at times, ruthless streak. The scene in which, encouraged against her will to don a mask and retail a story for the evening’s entertainment of her family and Haworth curacy, a séance is effected is genuinely frightening, a releasing of energies in response to a question best left unanswered. In similar vein, the failed stationmaster of Luddenden Foot, Branwell, receives acerbically short shrift when he canvasses Emily’s opinion of his writing late in the film.

The dynamics that animated the violent universe of Wuthering Heights are, as it were, enacted in the reconstruction of the film’s central protagonist. Emily is a mirror to the conditions of her novel. The landscape of the Moors, filmed with brooding, changeful honesty both in the environs of Haworth and in Cumbria, is faithful to the legacy of the novel, and to our received impression of its creator’s life. As, also, are the stark greys of the gritstone architecture. Filmed, at least in part, in the Parsonage and the old school more or less opposite, O’Connor’s narrative unfolds in a recognisably austere terrain.

Another kind of consummation, achieved in several erotically-charged encounters with the curate, William Weightman (Oliver Jackson-Cohen), is the kind of departure from what we know of Emily’s life that seems most to have offended the film’s naysayers. Which is a shame, because the relationship represents a spilling over of Brontë’s overwhelming imaginative appetites into the realm of the material, yielding a new dimension of possibility. The crisis of conscience that almost undermines Weightman’s capacity to function – he dies of Cholera shortly after - is beautifully drawn by Jackson-Cohen in a performance of great depth and swallowed passion.

The bookending of the film with Emily’s death on a Parsonage sofa is a profoundly affecting and bravura touch, lending circularity to a story that remains incomplete and will continue to resonate so long as the Brontë mystique sustains. Emily is a recreation of rare, indefinable quality.