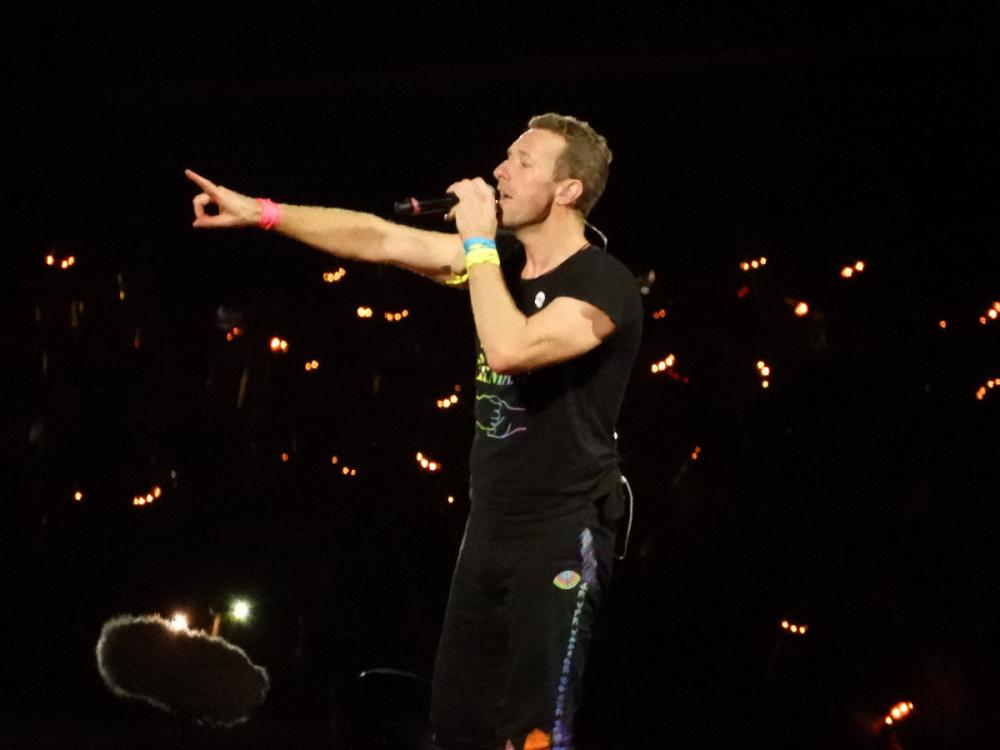 Within the first thirty minutes of Coldplay arriving on stage, for the first of two nights at Glasgow’s Hampden stadium, the audience had been greeted with fireworks, giant balloons and confetti cannons - along with a barrage of hits.

Colour has always been a prominent aspect of a Coldplay show. From the glowing wristbands given to the audience that lit up in different colours throughout the show to the use of colour in the lighting and stage set the show never let up visually.

At the moment the band arrived on stage to perform Higher Power the fireworks exploded behind the stage in quick succession, it felt like the closing of the show, not the beginning. As a sea of giant inflatable balls were released over the fans during Adventure of A Lifetime it was hard to pick out the band on stage. Although this all looked impressive it did distract from their music, which really does not need any gimmicks. Sometimes less really is more. 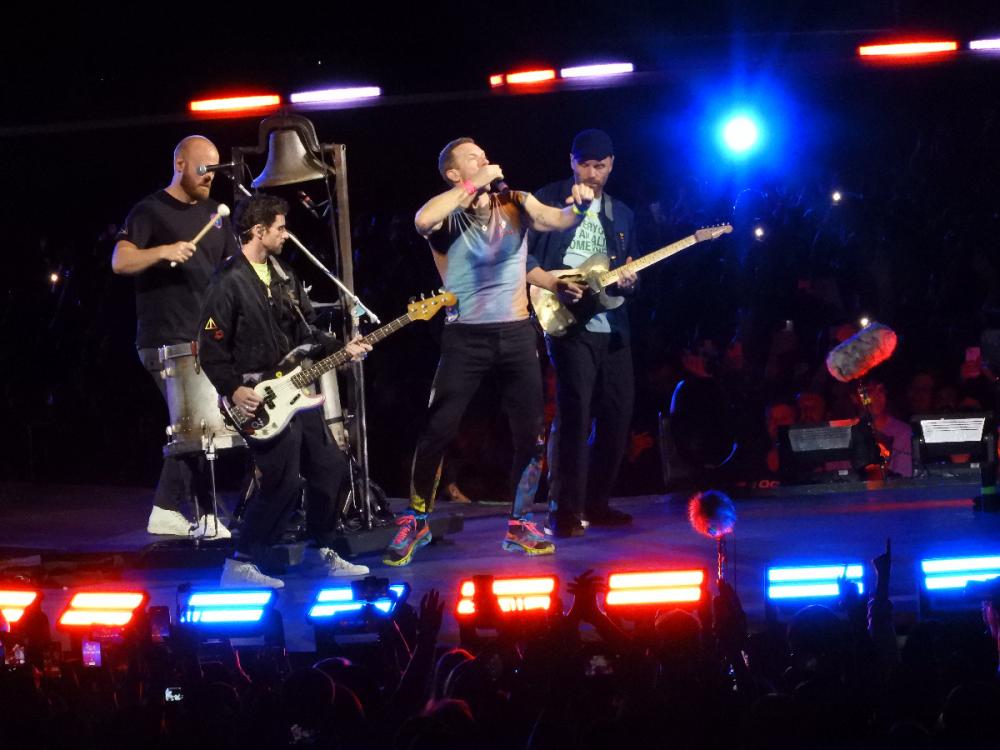 Wearing two wristbands, in the colours of the Ukrainian flag, lead singer Chris Martin appeared to be in his element as he danced and ran around the huge stage. “You sound amazing” he exclaimed as the audience sang loudly to Paradise. His enthusiasm - infectious as always - was not lost on the sold out audience

Referring back to their early days when Coldplay played at Glasgow’s King Tut’s Wah Wah Hut and the legendary Barrowland Ballroom, Martin took the fans back to the start of their career with Don’t Panic. The stark acoustic piano version contrasted well with the somewhat bombastic approach that had been applied earlier.

The plethora of ideas continued to flow from having a separate stage at the side of the stadium to Martin duetting with a puppet that was meant to be an alien on the song, Human Heart.

BTS appeared on the screens for My Universe and again the fireworks lit up the sky before the band dressed up as aliens to perform Something Just Like This. 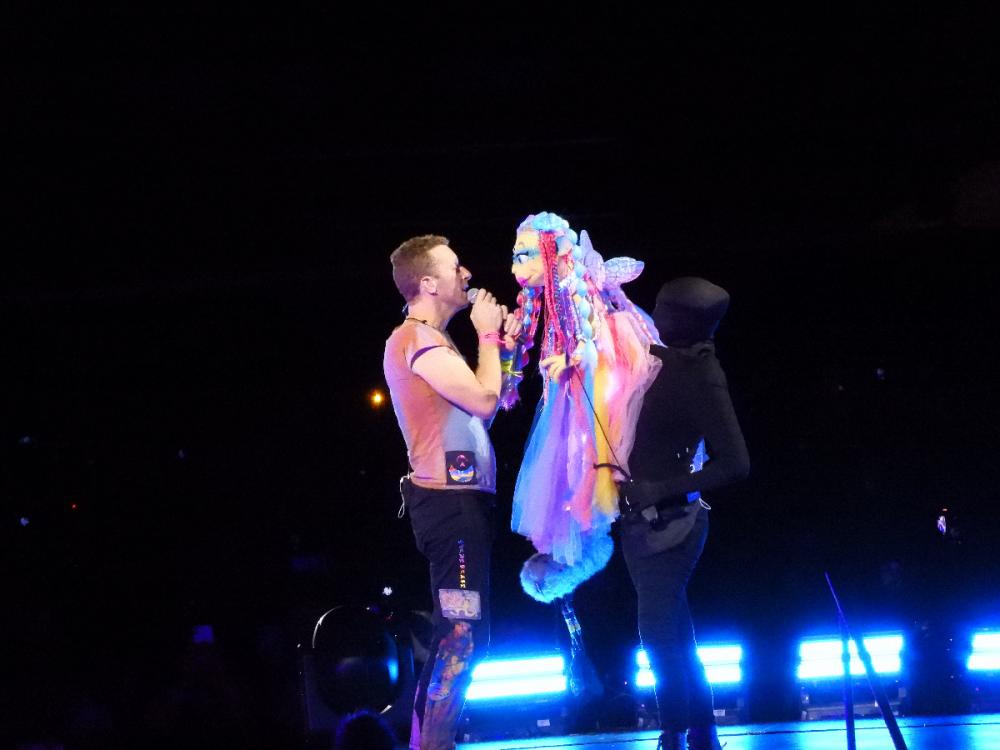 Whether it was planned or not, Martin halted Sparks after the first few notes “ I want you all to put your phones in your pockets and put your hands in the air” he asked the audience. And so the band and fans sang together and actually lived in the moment without any distractions - and it all felt perfect.

The excitement continued when Edwyn Collins arrived onstage to perform with Coldplay his 90’s hit A Girl Like You. With it also being his birthday Collins could not have wished for a better birthday present.

As the the evening drew to a close with Fix You, 50,000 voices sang in unison proving that all you really need is a good song. That moment will probably be remembered long after the giant balloons and fireworks had faded away into the night time sky.

Earlier in the evening Nina Nesbitt displayed a consummate set, switching between guitar and piano the Scottish musician delighted with Colours of You and The Best You Had. Her confidence and friendly attitude appeared to resonate with the audience.

American singer H.E.R. started off her set with a couple of Beyoncé style tracks before showing another side to her music with covers of Are You Gonna Go My Way and I Love Rock ‘n’ Roll.

Coldplay have pledged to cut the tour's direct emissions by more than 50% compared to the previous tour (2016-17), and work with partners and suppliers to reduce their impacts and emissions as much as possible.

Coldplay has partnered with Climeworks who will be capturing CO2 on their behalf in their facilities, such as Orca in Iceland.

Orca combines Climeworks' direct air capture technology with the underground storage of carbon dioxide on a much larger scale than previously managed.