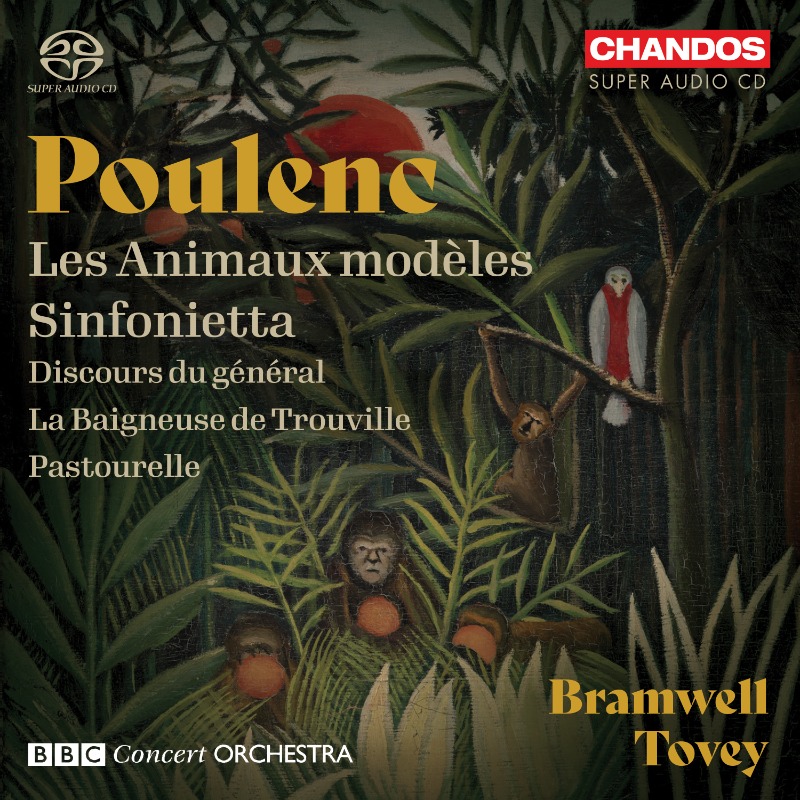 It is characteristically Poulenc, and there are snippets that reference some of his other works such as the magnificent Gloria, the strings and timpani of theOrgan Concerto and Les Biches.

The thirty-minute Sinfonietta was a BBC commission premiered in 1948 conducted by Roger Désormière. Tovey brings out the wonderful light orchestration as well as the playful humour. He is faithful to the metronome markings which are listed in the booklet. The work dances along and the lovely melody in the third movement is beautiful with the soft woodwind warm and expressive. The final is terrific full of vitality. There are moments that reminded me of Darius Milhaud.

Poulenc fist mentioned plans for a ballet ‘on the fables of La Fontaine’ in 1937 according to Nigel Simeone’s superb notes but it was only after the Nazi occupation of Paris in May 1940 that Poulenc returned to the idea.

Eight different scenes from the Fables make up the ballet: Dawn, The Bear and the two companions, The Grasshopper and the Ant, The Amorous Lion, The Middle-aged Man and his Two Mistresses, Death and the Woodcutter, The Two Cockerels and Midday Meal

Honegger admired the music of Les Animaux modèles, noting that Poulenc was influenced by Chabrier, Stravinsky and Satie but assimilated into a style that is wholly his own. Tovey and the BBC Concert Orchestra certainly enjoy performing this not often heard score. There are many lovely moments throughout not least the Amorous Lion with its sweeping melody and waltz section and the hens watching the two cockerels. Poulenc also uses the trumpet to good effect.

A performance full of character and orchestral colour teeming with wit and jovial rhythmic playing.

Recorded in the Watford Colosseum, it is exuberant and luscious making an appealing and enjoyable programme. It truly captures the spirit of Poulenc, is delightfully performed and certainly a marvellous tribute to dedicate to the memory of Bramwell Tovey.

One Poulenc disc to have in the library.