Classical Music: In The Stillness: A Merton Christmas:

In the Stillness: A Merton Christmas 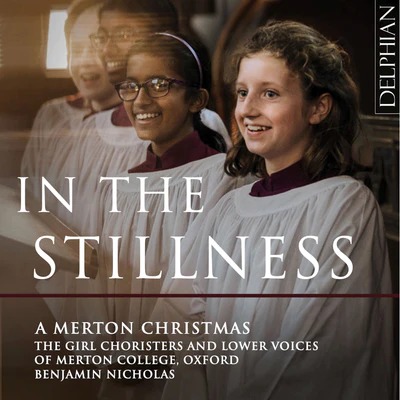 This beguilingly beautiful album has 23 seasonal songs sung by the angelic voices of The Girl Choristers of Merton College, Oxford, conducted by Benjamin Nicholas. It comes timely upon the hour of celebration but there is something timeless about it – even though the eponymous In The Stillness, Sally Beamish’s setting of gentle words by Katrina Shepherd, is contemporary and, more fundamentally, a college choir of girl choristers has existed only since 2016.

The sleeve notes, by Michael Emery, paint a vivid picture of the 24 choristers and ten probationers entering through Merton’s fifteenth-century gatehouse before ascending to the chapel built in the thirteenth century. Steeped in tradition, they sing Evensong once a week and on occasions augment the full adult choir at concerts and festal services. On this, their debut album, they are supported by the lower voices of the Chapel Choir, in a programme of music drawn from across Europe, spanning centuries, confirming the Christmas story of light, hope and joy.

Elgar’s Angelus sets a recurring tone, sounding the beginning of the concert with the inception of the nativity story, the revelation to Mary, ringing as clear in the a cappella voices as if the Angelus bell itself were there to summon. The voices do indeed chime on Carol of the Bells, the popular carol, of recent Hollywood resurrection, composed by Ukrainian Mykola Leontovych on the eve of war in 1914. Based on a Ukrainian folk chant, Peter Wilhousky’s lyrics imagine the joyful tones of sweet silver bells ringing out in every home. Such words were perhaps never more poignant than now with bombs falling without Christmas truce on his country of origin.

Two gentle pieces, the Polish carol Infant Holy, arranged here by Michael Nicholas, father of the present conductor, and the old Czech cradle-song Rocking Carol have musical traditions rooted in Eastern Europe. There are a couple of spirited pieces from Bach to excitedly bruit the glad tidings.

There is something deeply affecting about the Christmas story adapted to a snowbound winter landscape and much of our innate understanding of what constitutes the fit and proper mise-en-scène derives from Germanic tradition. Up Good Christian Folk, is a sixteenth-century German carol adapted by G.R. Woodward, a poet and priest (more closely associated with ‘the other place’, after his publication of a standard work, A Cambridge Carol Book: Fifty-two Songs for Christmas, Easter and Other Seasons). The bells peal in triumph: ding-a-dong-a-ding!

Probably the best-known item is Gustav Holst’s setting of Christina Rossetti’s In the bleak mid-winter. The blended voices of girl choristers singing descant to the male basses and tenors, underscored by the organ, played by Simon Hogan, sounds like the heavenly distillation of the spirit of an English Christmas.

And to take us beyond the feast of Christmas to the end of the month, we have Britten’s curious little A New Year Carol, based on a traditional folk song included by Walter de la Mare in his anthology of poems for children. It’s doubtful if many of its original audience would have recognised the stirring of the faint embers of Pagan traditions of well-dressing that once brought in the New Year.

This album brings wonderful Christmas cheer in musical form. We might be hearing - in the effulgent words of John Rutter’s Candlelight Carol - “Angels singing Gloria in excelsis Deo!”

It may be suspected a new tradition is in the making. Let’s hope for a Merry Merton Christmas every year!

Have a wonderful one this!