B Is For Boat: Orphans Of The Storm By Celia Imrie 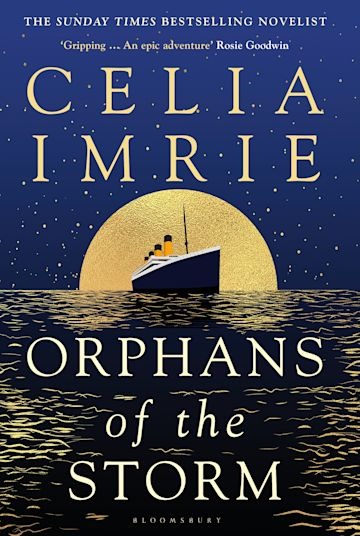 A trip to Waterstones the other weekend and a browse around the ‘new fiction’ table was just the tonic, with Autumn days looming. There was plenty of choice and one of the books I selected was Orphans of the Storm, partly because it was written by Celia Imrie whom I love on screen, and partly because it was based on one of the many true stories from the Titanic. And it’s funny what you learn. Talking to my nonagenarian mother about the book, I learned that my grandfather was on board that ‘unsinkable’ ship for its sea trials nearly two weeks before the fateful departure. No icebergs on that short trip, thankfully. She’d never mentioned it before.

So, to the book: Orphans of the Storm is a powerfully written historical novel based on the lives of real people and events in the early twentieth century. It is set in France, London, New York and on ‘the greatest ship ever built’, the ‘unsinkable’ Titanic, the story of which somehow never gets old.

The narrative is told from the point of view of Marcella, Michael and Margaret (as Imrie says herself, ‘so many M’s’). Marcella, a romantic, works as a seamstress for a tailor but wants to be a famous singer. Still in her teens at the start of the novel, she is swept away by romance, heedless of warnings from the family. She does not understand that the apparent spontaneity of her older fiancé actually reveals a controlling and coercive streak in him. He, Michael, is a master tailor who does seem to truly love his young bride at first but comes to hate her as his increasing jealousy of her love for their two children consumes him. That he is also cruel and violent, a thief, a fraud and a liar makes him, as you would imagine, a thoroughly dislikeable character. Nevertheless, Imrie does make clear the shades of love from the early passion to the darker, more painful element. Love hurts!

Marcella is a brave woman and files for divorce at a time when females had no rights in law and all the power rested with men. The nerves she feels as she tentatively sets foot in the solicitor’s office, and the number of times she nearly gives up her case, are all understandable and authentically captured by Imrie. 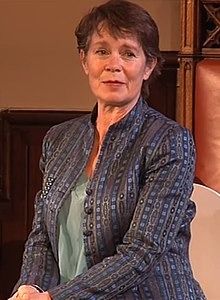 Celia Imrie at the Cambridge Union, 2011
Michael seeks to punish her in the worst way possible by taking her children from her. Despite the court ruling granting equal access, he prepares, with his protege Stefan, to kidnap the boys and whisks them away before Marcella even realises. He intends to take them to America and books tickets on the Titanic.

We next meet Margaret, a young American socialite, who embarks on the grand tour. After several months away, she decides it is time to return home, and, prompted by a newspaper advertisement, she secures tickets for herself and her friends on the Titanic.

The descriptions of life on board the opulent floating hotel are suitably decadent, and accurately described as being class dominated. Research was obviously thorough. The frivolity, extravagance and luxury are vividly portrayed. Fast forward to the disaster about which we all know. From the minute the lifeboats are launched, the story becomes much more poignant and emotions are laid bare. There is the kindness of some and the selfishness of others – perhaps to be expected in any situation involving a group of human beings. Long fearful nights, floating on dark seas are made worse by the images of the flotsam and jetsam drifting by: ‘a long white satin glove ... a slipper ... a dead baby’. Imrie does not dwell on the horror for too long but it is subtly laid out before us.

Surrounded by loss and grief, however, Margaret sees her rescue as a chance to make amends. She acknowledges the superficiality of her life so far and becomes determined ‘to do something right’. Finding there are two young boys on board who are believed to be orphaned, she makes it her mission to save them and to take care of them. On arriving safely home herself with the boys, she is surprised not to get the support she expects from her parents. Margaret has been separated from her shipboard companions and feels lost, needing the understanding of those who have been through the horror as she has. Imrie also successfully portrays the newshounds as callously in pursuit of a good story, the authorities with whom Margaret has to fight, and who have less compassion than one would expect.


Also by Artis-Ann ...
Review: Her Last Promise By Kathryn Hughes‘So Many Dead In The Ashes’ : Dust Off The Bones by Paul HowarthMelody Of Peace: The Electric By Tim MurgatroydHe Knows I Know He Knows: Cradle Song By Robert EdricThe Best And The Absolute Worst: The Dressmaker’s Secret By Lorna Cook
Meanwhile, in France, having discovered, with horror, the whereabouts of her children, Marcella suffers the pain and frustration of trying to make people believe the orphans of the Titanic are her boys. Her task is made more difficult because her husband was travelling under a stolen passport and the children were listed only as ‘two children’. The men in authority with whom she is forced to deal, are sceptical of her claim and do not share her sense of urgency. But she is not seeking fame, as they suggest and she has no ulterior motive, she simply longs to be reunited with her children.

This book is based on fact and the truth is blended well with fictional details, which are necessary to fill in the gaps. The ‘Behind the Scenes’ notes provided at the end are interesting, explaining the differences between the real people in this drama and the fictional versions of them.

This novel was a slow burn but as the pace picked up, it became a gripping and compelling read.

Orphans of the Storm is published by Bloomsbury