A Message From The Dead: We Are The Weather By Jim McElroy 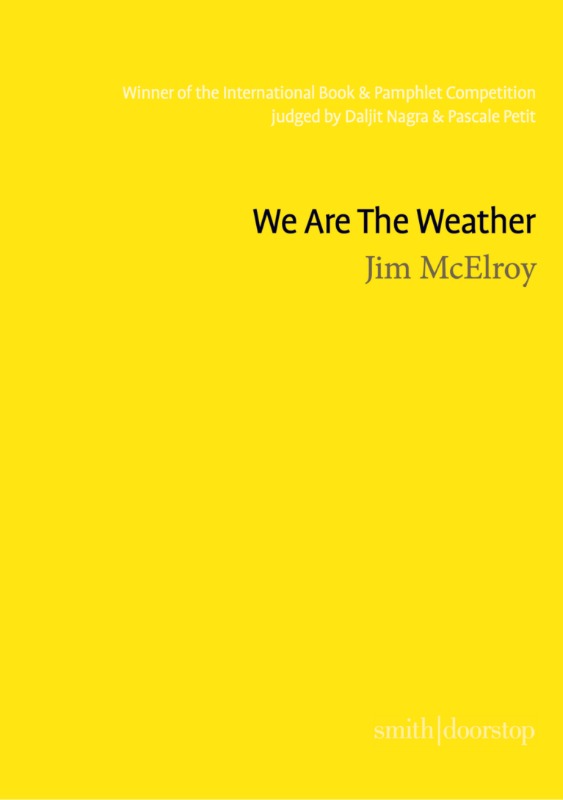 The title of Irish writer Jim McElroy’s remarkable recent pamphlet for smith|doorstop does much to corroborate that sense of unanimity with the natural world that is a prevailing feature of his poetic métier. As mood darkens in accordance with a rural landscape that is sodden, encloistered in sepulchral light and mostly resistant to aesthetic considerations, our thoughts turn, perhaps too readily, to the black hills of R. S. Thomas’ godless breed of Welsh upland farmer. And if there is thin consolation in the presence of labour and hardship, the effort of will required to transfigure hard experience into words that confer dignity brings a species of maturity to McElroy’s work. For this is a serious, and seriously skilled, suite of thematically connected poems, whose quality gives the lie to the fact of their comprising a first collection.


The ‘exocet’ velocity of the father’s spit is as contemptuous, here, as that directed into the fireplace by Tony Harrison’s emphysemic miner.
Underwritten by an indentured capacity for toil, these poems exhale a world most of us properly recognise only at several removes. And they are unremitting, making no apology for a vernacular exposition that, in any case, dovetails perfectly with the tilling of a bone-hard terrain, and the lives committed to its troublous subjugation. McElroy makes no concession to those who would willfully resist the polysemic intractability of a language that is sometimes native and sometimes his poetic own. Finding precisely the right word for an act whose unfolding defies adequate expression, the poet gives onomatopoeic life to ‘sprockling up’, which grants the ascendant energy of ‘becoming’ on a newly-born calf gasping for air in Hard Knocks, just as ‘chunter’ (Pouring the Yard) is verb turned noun, in the context of a cement mixer whose centrifugal racket imitates the grumbled complaint of a struggling farmer.

Better still, the ‘clabbered’, or mud-caked, boot that disturbs the shovelled gravel in His Work, a brief, but finely-honed condensing of punishingly heavy labour into two stanzas that re-work the nature of toil into an act of penitence, ‘bent to the drill, / fingernails clotted in sod’. There are pronounced shades of Thomas in a poem that reinforces the value of productive physical effort in the calculated belittlement of the son’s ‘pinstripe’. The ‘exocet’ velocity of the father’s spit is as contemptuous, here, as that directed into the fireplace by Tony Harrison’s emphysemic miner.

But most we are left with the monosyllabic isolation, the guttural immovability of purpose that characterises the man’s grasp of his own condition, as though certainty was locked in to the unforgiving land as resolutely as Iago Prytherch is a product of the scabby upland turf he breaks for cattle feed. His Work, like so many of McElroy’s poems, is a window on a world of struggle; the kind of struggle that renders the endurer hyper-sensitive to climatic change, like farmers to suggestions of snow, or recumbent cattle to rain. Weatherbeaten describes a sensibility that is unusually attuned to weather in metaphors that are themselves precisely adjusted to the task of defining mood:

‘His eyes would peel the horizon
as the wielded knives of Siberian easts
hacked his cheeks, ripped off petal and leaf.
In the verge, grounded leaves buried each other.’


The opening poem of this outstanding collection - Hoor - breathes emotional vigour into a near-autonomic linguistic tic...
This is fine, unsentimental writing, and if the farmer takes ‘the weather personally’, he does not carry the touchstone of sensitivity into his relationship with the animals he rears, or domesticates for the purposes of work. To fail to understand the pragmatic needfulness of drowning kittens in a pail, like the figure of Dan Taggart in Heaney’s The Early Purges, is a dereliction borne out of urban ignorance. But the aching counterpoint of the hand-reared lamb unceremoniously removed for slaughter in McElroy’s affecting Sacrificed, lends a further, eloquent dimension to a wider picture of indifference through the eyes of the narrator/son. The surrogate ‘parent’ of the first quatrain is dealt a consonantally violent blow in the last:

‘The gangplank slammed shut,
drowned her bleats, flared nostrils
nosed through air holes.
The lorry shuddered into the dusk.’

The final image is shockingly terminal, as, elsewhere, is the detailed ‘inflation’ and explosion of a bullfrog by, probably, a bored teenage boy in Bully. McElroy stands back emotionally in order to deliver a forensic account of an act of wanton cruelty whose outcome is drawn with oxymoronic relish, the frog’s ‘blood clots hung like fuchsia’; and of course there might be morbid fascination alongside the visceral jolt of the moment. McElroy is an astute opener of doors of suggestion that usher in darker ruminations. The accomplished The Attic Room adds the further dimension of pathos to a narrative of domestic foreboding. Topped and tailed in a shared bed, the narrator recalls the disturbing insinuation of skittering mice into the farmhouse bedroom’s nocturnal peace in a richly embroidered and metrically measured drama of gathering unease. The poem’s final line touches that drama with an unexpected but unmistakable patina of fraternal love:

‘and beneath the bed I hear them darting past
the full po, nibbling at satchels, shoe laces,
comics, taking the bait: the set trap snaps,
my younger brother’s urine soaks my spine.’

The need to name objects, to give body to these totems of lives lived according to tenets peculiar to an agrarian culture leaves the door ajar for the rest of us, lets sunlight onto a dank and dripping terrain. And if the view afforded is mostly grey, it is not bloodless. Cognizant of a debt that is blood-borne, intrinsic, McElroy’s poems often resemble Heaney’s, especially, early work. The opening poem of this outstanding collection - Hoor - breathes emotional vigour into a near-autonomic linguistic tic, establishes a bond that can accommodate, by virtue of its tensile durability, any perceived offence. The father figure whose brussen verbal shrugs are a means of distinguishing one from another with humour, is rendered only marginally more compliant in death:

‘Still in his overalls, he lay on the bed; fresh
muck clung to his hobnails: right oul hoor
found him slumped over granite; I bent down
for our first kiss – his hoorin head, cold as stone’.

But filial love is graven in stone as surely as the poet Jane Clarke’s profoundly affecting connection with her own parents in rural Roscommon. Even unto emigration: in the strained couplets of Noirish, the presence of racism skews the welcome in ‘the land / of the free’, encouraging the ‘sweet talking’ of Irish cliché, whilst never, in the process of gaining acceptance, disturbing the cultural ties that bind. Or the spectre of mortality: the beautifully worked, diminishing stanzas of Second Chances, whose lineation rises and falls like the beating of the heart, foregrounds a moment of real fear as the narrator’s experience of coronary care and the return of a missing pulse (‘They said it was the circuits’) are juxtaposed with the memory of a car accident, and the closeness, at any given moment, of the possibility of death. McElroy’s great gift is in the blending of one experience with the other in seamless metaphors – ‘a series of electrical impulses, / flashing around the veins, headlights in the dark.’

The working of the dead in the living is nowhere better illustrated than in the fitting final poem of We Are The Weather, whose sense of a continuum, of the survival of a kind of spirit in the commonplace architecture of the present, is realised in simple, moving lines that deserve no less than full reproduction here:

‘The night is lost to you.

Even in light
you don’t see us.

shake the ground,
blow your hair.

You think we are
the weather.’ (A Message from The Dead)

We Are The Weather is published by smith|doorstop.