A Different Kind Of War: The Tin Nose Shop By Don J. Snyder 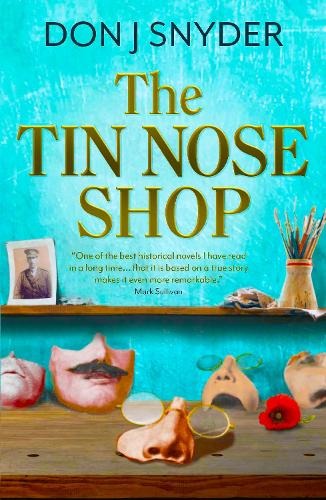 I sometimes wonder if I am a glutton for punishment, choosing as I so often do, to read novels which reflect on grim details of our past, but I console myself in the belief that we ignore history at our peril if we are to make a better future and, thankfully, most of the books I read end with a promise of better times ahead. So, yet again, I found myself engrossed as I read The Tin Nose Shop in just two days.

Inspired by an extraordinary real-life story, the novel centres around the little talked about rehabilitation of soldiers who came home from the trenches in World War One, with horrific facial disfigurements. In an attempt to help them re-enter society, artists and sculptors were employed to create masks to conceal their injuries. These masks were made as lifelike as possible in the hope of providing some measure of dignity for the men who wore them. Set in a castle in Ireland in 1916, the narrative centres around the first of the Tin Nose Shops, as they became known.

“The war that took them from their families has ended. The war that will take them home is beginning”, and the short chapters which switch from one to another, reflect the lack of peace of mind for the troubled characters. The struggle to return to the normality of families and land “which does not explode beneath your feet” is a hard one, especially with the memories of what has been seen and, in some cases, guilt for what has been done, let alone the physical injuries and mutilation.


Inspired by an extraordinary real-life story, the novel centres around the little talked about rehabilitation of soldiers who came home from the trenches in World War One...
Sam Burke has had a reprieve from the firing squad. Having been found guilty of cowardice in the field, he has been sentenced to death, but as a talented artist he is sent instead to Ireland, to make the first of the masks. He stays for over two years, under the auspices of Oliver Blackburn, an army chaplain who saw active service in the Boer War. Too old to fight in World War One, he still chooses to help and counsel where he can.

Sam and his best friend, Ned, went to war together - Ned for the adventure and to fight for his country and Sam to look after his friend. There are echoes of Morpurgo’s Private Peaceful in the camaraderie and natures of the two boys. Sam sees Ned die and, like so many others who were part of that “generation of lost boys” with no Peter Pan or Wendy to save them, comes home, battling his demons. Sam asks Oliver, “How do you make sense of the senseless?” but “there is benevolence in the world”, and Oliver embodies this, even though, as a man of the cloth, he too, is faced with inner turmoil “believing deeply in God’s goodness while surrounded by brutal destruction of goodness”.

Faith is questioned again and again. The metaphor Snyder uses - “You have to have faith to hang your laundry out in the rain, faith that the sun will come out before the day is through” - is simple but the reader feels Sam’s anger when he also says, “Let me paint their ruined faces on their gravestones and it will be enough to make even God turn away”.

Sam develops a cynicism about the work he is doing when he realises the masks will ensure “the real horror will be hidden away so they [the people who made the war] can be cleared of any guilt”. He struggles to see that he is providing a means for men with horrific facial disfigurements to re-enter life. He comes to learn that “We’re all wearing masks…we almost never take them off” as he throws himself into his work: it is easier than thinking for too long.


There are so many strands to this novel, so many characters, each with an intrinsic part to play and each needing to be saved in some way.
In some ways, he is right to be cynical. Army chiefs and government officials want to know what makes some men cowards in the field. These Generals and politicians are the men who have made the war and sit in their ivory towers, as far away as possible from the battlefield, while exhorting young men “to walk steadily towards the enemy guns”. Oliver has been tasked with discreetly questioning Sam about his behaviour in the trenches in the hope that they can gain a greater understanding of what makes some men cowards, and soldier training may be altered to ensure more young men give up their lives willingly. Their words, not mine!

The Great War was violent and Snyder skilfully acknowledges the fact without dwelling on it. The descriptions of the men’s faces and Sam’s memories of “the boot he picked up with the foot still in it”, the mud and the noise and the “smoky trench” and “the squealing horse racing across no man’s land…whose ears had been set on fire” are enough to remind the reader of the reality.

There are so many strands to this novel, so many characters, each with an intrinsic part to play and each needing to be saved in some way. There are many kinds of death and many different ways to save people from dying.

There is little humour but there is tenderness, primarily from the female characters: Katie, Lily and Daisy. Katie is Ned’s wife and mother of his child. Her emotions are mixed as she awaits news. Eventually, having been told her husband is dead, she finds Sam and tries to reach into his mind, needing to understand: “Each thing she says is like another key that she is trying fit into the lock”. Sam may feel like giving up on himself – he has tried before - but others do not give up on him. Ultimately, Katie helps not only Sam but the other men in the castle for whom she becomes their “angel”.

Lily, a survivor of the sinking of the Lusitania also helps Sam but he helps her too. She decides there is something broken in Sam but it is not until they look into each other’s eyes that she realises “for the first time since she jumped from the deck of the ship, that she is still falling”, and Sam helps her land.

Having been duped into helping the rebels plan for the Easter Uprising, she has been waiting patiently for months for the boy she thinks she loves to come back to her. She knows that it’s a man’s world. “If you had trousers on then you counted for something…you were not told what to do”. Ironic given the role of soldiers whose job was ‘to do or die’ without ever reasoning why. Snyder is good at inserting historical detail. Lily’s uncle is James Connolly, who died leading the Irish Citizen Army, a socialist militia, which played an important role in the rebellion. Over two hundred women also played a role in the rising and perhaps Lily’s character is a nod to them. Given the time and location of the setting, the event could not be ignored.


Here is a beautifully written novel, sensitive, exploring not so much the brutality of war but the humanity which stems from it
Daisy is the artist’s model, Sam’s muse, who provides solace for men in need, a role which cannot be underplayed.

Snyder explores the difference between strength and courage which Oliver tries to explain when Sam’s secret is eventually revealed. He also considers age: “young people face forward in the railway carriage of life, old people’s seats face backward so that they are all on the same train but…being drawn reluctantly to what lies ahead”.

Here is a beautifully written novel, sensitive, exploring not so much the brutality of war but the humanity which stems from it. It is about the human spirit and thankfully, the healing power of friendship.

The Tin Nose Shop is published by Legend Press