E.M. Forster
“One may as well begin with Helen’s letters to her sister”. And so begins Howard’s End, written by E.M. Forster (1879–1970) and first published in 1910. By all means call me contrary or even vexatious, however given that this exquisitely executed novel explores an interdependent tapestry of diametric opposites, I will begin with a confession. I adore this book and consequently lack any capacity whatsoever to present you with a balanced response to it! It’s not that my love is blind, more that it’s so profoundly woven into my intellectual and emotional fabric that bias is not merely ingrained, it’s immutable. It was the first serious book I fell in love with and one never forgets their first love. In my case, Cupid’s arrow remains embedded in my heart, driven ever deeper by repeat readings which have only intensified my rapture. I’m certain not to be the only reader to swoon under it’s magic and I certainly won’t be the last. Cupid has and always will be busy as far as this one goes! In my case, his first shot hit the bull’s eye and simultaneously catalysed my lifelong love of reading. In short, I owe Forster a debt I can never repay.

So, if I can’t be impartial, my objectivity evaporated like sun-kissed dew, then I can at least try to illuminate this numinous, yet humanistic novel with my own internal light. Affairs of the heart are of course intensely subjective, often multiplex and always indelible. My infatuation is like all such things, a delicious amalgam of facts, sensitivities and individualistic preferences. Forster’s perspicacity and authorial virtuosity, not to mention his poetic lyricism, deft touch and thematic conviction all combine in this novel and leave me spell bound. Perhaps now is an appropriate moment to halt my ham-fisted panegyric and establish some details; the soil, if you like, into which my affection for the book is rooted.

The idea for Howards End first appeared in Forster’s diary on the 26th June, 1908. Two years later and after much struggle and despondency, he had completed the book. It was published to a choir of praise; Forster had arrived. It is now generally recognised as one of his two greatest literary achievements, the other being A Passage To India (1924). For much of his life, Forster objected to the praise heaped upon Howard’s End rather than any of the other five novels published in his lifetime. His diary reflects on the novelist’s not actually caring for any of its characters. In an entry dated 6th June, 1965 he says , “Have been reading HE and A Passage…both very good…there is no doubt that I have been very good and deserve my present position”. An uncharacteristically vain note, but one I have no problem agreeing with! One of the few discordant critical voices to ring out upon publication was that of his own mother, deeply shocked by the novel’s unseemly central coupling. Forster was influenced by Samuel Butler’s posthumous novel The Way of All Flesh (1903) and the anti-Victorian sentiment running through late Edwardian England expressed his own view of society and it’s maleficent materialism, moral injustice and disconnection. No wonder his mother was shocked!

Forster responded to the works of H.G. Wells, but more essentially to the tumult around him. In the year Howard’s End had been published, King Edward had died and George V had been enthroned. There were two general elections, mounting industrial unrest and the international modernist explosion in the arts was about to produce London’s first Post-Impressionistic exhibition. In 1909, H.G. Wells’ Tono-Bungay had coldly appraised English society, with Wells employing the metaphor of it being viewed as a large country house with the lower classes concealed below stairs in the servants' quarters, while the upper-class frolicked in the ostentatious drawing-rooms. It was an age of uncertainty and transition.

Forster wanted to portray this disharmony, establish its causes, and as expressed in his novel’s motto “Only Connect”, assert his aspiration for a union of hearts and minds between two aspects of the English upper-middle-classes, namely the cultivated and the materialistic. Addressing this dichotomy and its ramifications was an ambitious aim. Fortunately for us, he executed it brilliantly in Howards End, weaving his themes through the interaction of two antithetical yet rich late Edwardian families, the Schlegel and Wilcox clans. We also meet Leonard Bast and his rather pathetic partner, Jacky, who are members of the same society, but living just above the ‘abyss’ within its underbelly. Leonard Bast remains one of the most tragic figures I have ever encountered in literature. 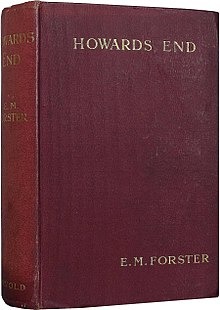 Howards End First Edition
The plot is another of the many reasons I cherish this book. It’s akin to a superb Swiss timepiece ticking along without missing a beat until the books denouement, meticulously calibrated and precisely formed. For me, it’s a sedulously orchestrated chess game explicitly designed to set up Forster’s end game. We observe and respond to the dynamics of intended and unintended consequences. We are shocked by specific developments provoked by others, skilfully manipulated emotionally, intellectually, spiritually and morally. Most importantly, we are able to experience the mindsets, spiritual hues and emotional realities of radically different characters.

The story itself has two distinct epicentres, one destructive the other constructive. Much of the novel’s focus revolves around two upper middle-class families, their relationships and impact upon one another, threaded together with their association with and effect upon a struggling member of the lowest echelon of the lower-middle classes. This dynamic is explored by means of drawing into sharp focus the seismic contradictions which define each family and by illustrating their radically different quintessential ideologies and ascriptions. I adore the way Forster uses the shibboleths of both families to elucidate and contrast the seminal themes of the novel.


Also by Paul Spalding-Mulcock...
Mile High Musings - On NarrativeThe Sound And The Fury: A Hero Of Our Time By Mikhail LermontovReview: Sideways By Rex PickettMucking Out the Augean Stable: A Bedside Table MuseThe Island Of Dr Moreau
Forster also places the house, Howards End itself, at the centre of his work. The transitional nature of its use and ownership impact upon those who encounter it and its mystical healing properties, load it with rich symbolic purpose as the nexus between polar opposites and the embodiment of the novel’s core message – ‘Only connect’. Forster takes a leaf out of Tono-Bungay and uses a house to both make and support his allegorical web. Tellingly, the fictional house of the novel’s title is based upon Rooks Nest, a house the young Forster lived in as a boy. It’s a profoundly powerful, ineluctable force throughout the book and no accident that the two most balanced characters in the novel, Margaret Schlegel and Ruth Wilcox both share an ineffable and innate attraction to and love for Howards End and it’s pagan totem, the guardian wych-elm. The house is a manmade construct, but deeply in simpatico with Nature and natural laws. It sits on the semi-permeable membrane between prose and poetry, pragmatism and feelings. It is both sacred and grounded.

For me, Forster’s prowess is never more apparent than when he is addressing ideologies and social constructs, not directly but through the medium of perfectly realised characters and their masterfully expressed lexicons. Each character is so much more than a mere symbol; they are living manifestations of the ideas Forster wants us to confront. The themes explored within the novel make it a genuinely meaningful literary gem. They form an interlaced mesh of antithetical binaries. Imperialism and Liberalism, commerce and culture, capitalism and socialism, pragmatism and spirituality, prose and poetry, industry and nature, public and personal. Money, class, chauvinism, moral responsibility and injustice all find their way seamlessly into the fabric of the novel.

The contrast between the ‘inner and outer life’ is constantly echoed by the dichotomies Forster places before us. It’s all brought to a head after a delicate interplay of misfortunes, misunderstandings and ultimately a personal tragedy, Forster saves his most powerful themes for the very end of the novel; the astonishing power of compromise, forgiveness, and fundamental human connection. Forster has graphically, but elegantly demonstrated that rapacity, cold-blooded reason and ruthless materialism combined with moral complacency and heartlessness, are inimical to human wellbeing. Only harmony between divisive extremes can rejuvenate both people and society. Forster has imbued my conscience with this call for balance and left my account with him even further in the red!

So, there we have it. A condition of England novel that delivers on every level. A first kiss can be eulogised, as can the first time a heart becomes enraptured. A great book is far more intoxicating, especially if it gets its literary hands upon a young student. Thirty years after we first met, Howards End still has me besotted. Fortunately it is a book, so my wife is understanding. Thankfully for me, rather like Margaret Schlegel and to a lesser degree Ruth Wilcox, she can forgive many flaws in the name of human kindness! Unlike me, she has little to learn from Howards End, whereas I will indisputably benefit from and savour many repeat readings!