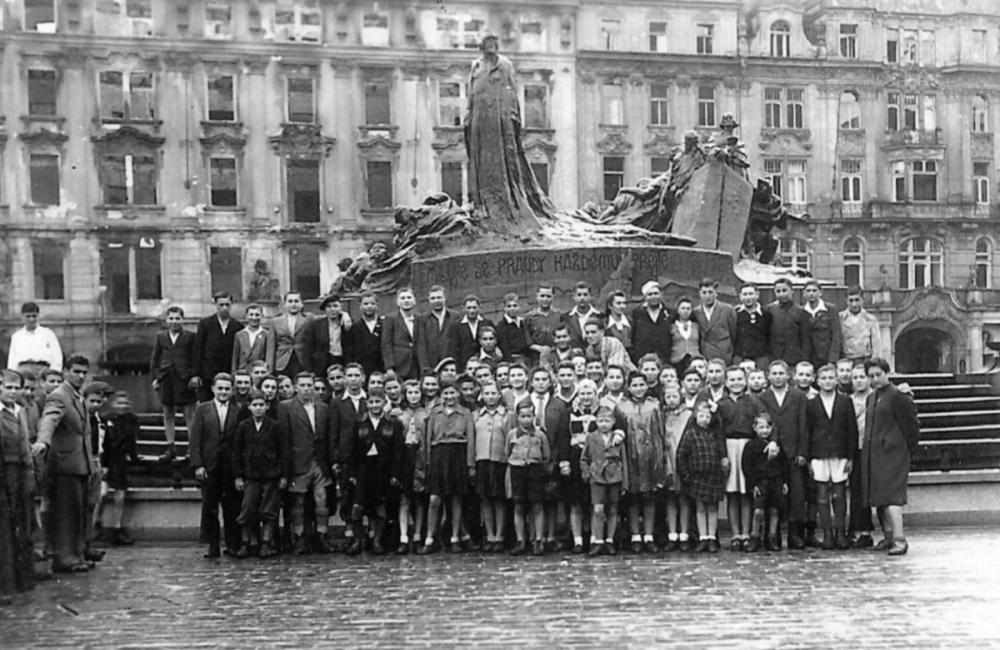 Young Jewish Holocaust survivors in Prague awaiting airlift to the Lake District in 1945. Image courtesy of the Lake District Holocaust Project
In the year since the pandemic hit the headlines and the world altered forever, we have all had to adapt. Face masks, social distancing, frequent basic hand sanitation routines, lockdowns, furloughs, Zoom meetings, government road maps, mass vaccinations etc. have become familiar on the landscape of daily life.

One aspect which affected my teaching more than I anticipated was the prohibition of an activity which I’d taken for granted up until March 2020. Choral singing in primary schools had been banned due to the risk element involved with respect to the spread of the Covid-19 virus through large groups of kids exercising their lungs in confined spaces.

Revised timetables and routines, daily testing of temperatures, discreet learning bubbles, remote education and other contingency planning came into play in order to try and maintain some semblance of educational continuity … but singing was something that, for sound reasons, had to be shelved.

Being the music coordinator and someone who loves singing, I missed it dreadfully. Its place in the curriculum was secure and well established at my school and looking back to the time before the world was turned upside down, music had played a vital part in the education and wellbeing of the children at St. Oswald’s Primary. 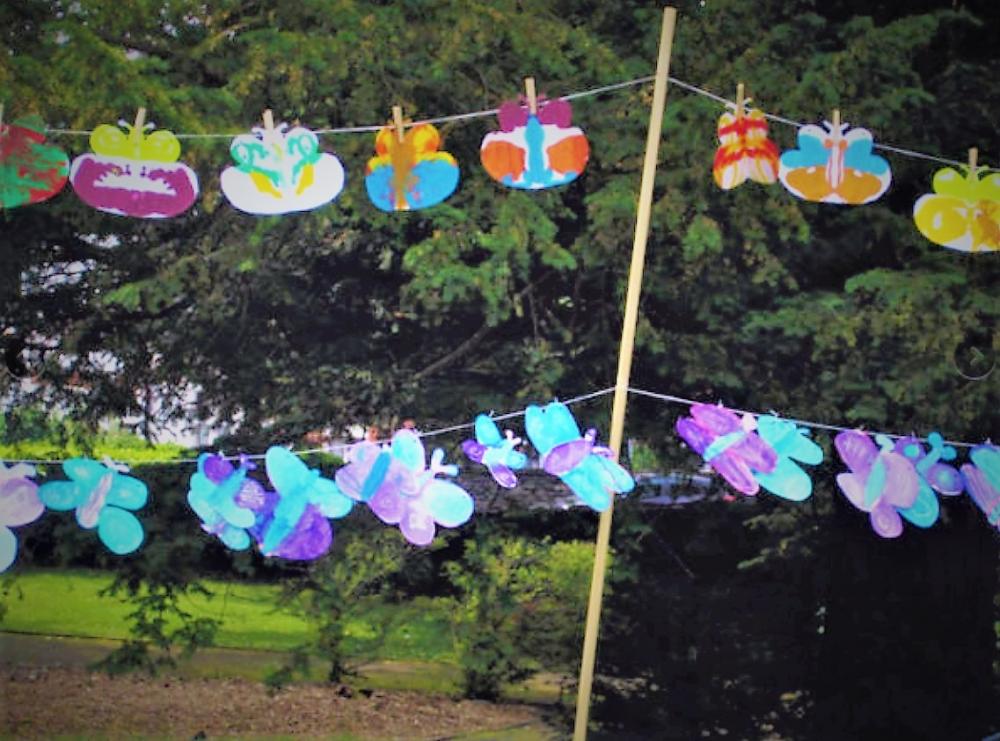 Work done by Primary Schoolchildren involved in the Butterfly Project.
We sang regularly and enthusiastically in assemblies, we performed skilfully in shows, the children were taught a wide range of songs from the Pogues ‘Navigator’, ELO’s ‘Mr Blue Sky’, Ralph McTell’s ‘Streets of London’, a number of action sea shanties, Sowetan welly boot songs and Polynesian canoeing chants, to Hava Nagila, numerous hymns, ‘The Skye Boat Song’ and ‘Nellie the Elephant’ … you name it, we sang it beautifully. The benefit of regular singing on children’s mental health was obvious and if, for some reason the Friday singing practice was omitted, my class of pupils and I felt as if we’d missed out.

From 1996 to 2012, the school regularly performed in Making Music productions with other schools in the South Lakes area, involving choirs of up to 300 kids (1200 over a week) at Kendal Leisure Centre, in such local epics as ‘The Bigge Sister Conspiracy’ and ‘The Cumbrian Sheep of Doom’. In recent years, we also used to hop down the M6 to participate in the Young Voices extravaganzas, singing popular songs at the Manchester Arena.

One of the most rewarding concerts came about in the summer of 2014 in memory of victims of the Holocaust. We had been invited to take part in the Butterfly concert outside Windermere Library where several young choirs were brought together by songwriter and performer Andy Halsey to sing songs based on a poem written by Pavel Friedmann at Theresienstadt concentration camp on 4th June, 1942. We made butterflies for display, learned about the persecution and murder of innocent people during the Second World War and about the rescue from concentration camps of 300 Jewish children who began their journey of rehabilitation on the Calgarth Estate in 1945, arranged by Leonard Montefiore and under the direction of child psychologist Dr. Oskar Friedman. My class of ten-year-olds sang Andy’s songs in the Windermere sunshine in front of an appreciative audience commemorating lives lost and lives rescued in those turbulent and horrific times in the mid-twentieth century.


Short Sunderland
Montefiore had founded the Central British Fund for Jewish Relief and his efforts, alongside a team of dedicated and thoroughly wonderful individuals led by Friedman, to rescue children abused by the Nazis was the focus of a marvellous film in 2020. The Windermere Children, written by Simon Block, directed by Michael Samuels and featuring amongst others, Iain Glen, Pascal Fischer, Thomas Kretschmann and Romola Garai, chronicled the events in 1945 at Calgarth in Troutbeck Bridge. Accommodation blocks that had been used to house workers producing the Short Sunderland flying boats became the temporary home for 300 traumatised young Jewish refugees in desperate need of care and rehabilitation.The film looks at how Dr. Friedman’s supportive network offered opportunities for sport, education, outdoor recreation, art therapy and healthcare. From the brutality of Nazi death camps to the tranquillity of the Lake District, the children’s testimonies, which now form part of the Lake District Holocaust Project exhibition, record how they felt they’d arrived in ‘Paradise’.

Friedman’s philosophy was a simple one: to aid their rehabilitation, the children should be given the maximum amount of freedom possible. Only rules that could be simply explained to the children should be imposed upon them. Ultimately, the resilience and bravery of the ‘Windermere Children’ shines through in the film, along with the professionalism, care, patience and love displayed by Friedman’s team and the determination of philanthropist Leonard Montefiore to rescue displaced young victims of Nazi hatred.


Also by Jonathan Humble...
Doggerel For The Discerning: 'The Thoughtful Little Cactus'Doggerel For The Discerning: 'My Camel's Name Is Brian'Doggerel For The Discerning: 'The Sad Tale Of The Reckless Rhubarb'Doggerel for the Discerning: 'The Tripe Hound of Little Ormstonmere'Will Purdom: Agitator, Plant-hunter, Forester By Francois Gordon - A Review
For me, the memory of standing in the sunshine on the lawn outside Windermere Library singing wonderful uplifting songs with a mass choir of children in commemoration of events which must never be forgotten, underlines the importance of perspective in these difficult times and the nature of the creative arts in education.This must never be taken for granted. Singing may well be currently on hold in primary education, but it will return, and events such as The Butterfly Project, whereby young voices can express themselves while learning about local and world heritage, are vitally important in maintaining a broad and balanced curriculum for our children.

Below is a poem written for children about those events on the Calgarth Estate:

In Troutbeck where they built the boats
that flew on wings from Windermere,
a part of Paradise prepared
for victims of a cult of hate.
Three hundred came from Prague that day
on Stirling bombers through the air;
the shadows of young boys and girls
who’d seen inside the Third Reich gates.

With marks of Hell upon their arms,
with features gaunt and hollow eyes,
what questions raced when they arrived
in Westmorland’s Calgarth Estate?
Instead of loathing based on race,
abuse that left them traumatised,
they found clean beds, fresh linen sheets
and buttered bread piled high on plates.

No more the shrill and callous voice;
they found a friendly word each day,
a lake to swim and woods to run,
a chance to learn and heal the pain.
And given paper, brush and paint,
some time to think, relax and play,
the children took a few steps on
the road to health; to smile again.

Less than a year for hope to spring,
a space to breathe, some dignity,
within this refuge by the lake
those summer months in forty-five.
From shadows how the children grew,
to rise against adversity,
when like the Calgarth flying boats,
from Windermere they learnt to fly.