Turning To The Sun: The Action By Roger Garfitt 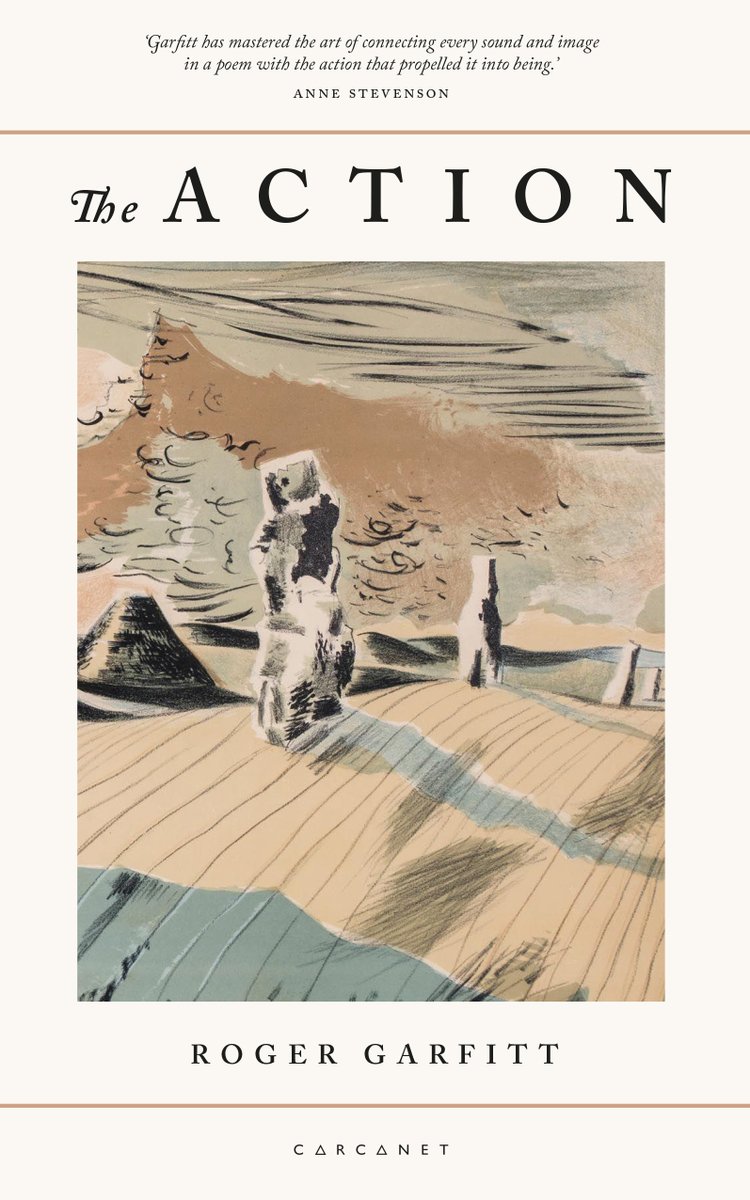 Roger Garfitt’s poems of organic growth and perennial re-birth capture the first stirrings of movement out of season against backdrops of human quietude, such as that given up in the peace of a Quaker meeting house in the gently articulated and simple beauty of ‘Snowdrop’. The solicitousness of silence, ‘the heads bowed / in patience’, yields anticipation alongside contemplation, a mirror to a sense of becoming which is consolatory. The mood of nature may be a reflection of emotional disquiet – as Wordsworth, whose work is referenced here, often found – or it may be a fabulous manifestation of its own transfiguring power. But mostly, the eloquent pastoral of flowers, weeds and butterflies ministers to its own silent purpose, as indifferent to the human eye as sedimentary rock, excepting where its efflorescence acts as a signifier of realms of metaphorical possibility. As it does in the luxuriant world of ‘Red Admiral’, whose powers of suggestion conjure battle wounds, flags and gypsy blood in the animated juvenile imagination.

‘Among the Believers’ bears the shadow of Geoffrey Hill – a sonnet settled in the Civil War but time transcendent in tonal disposition, it wears an armour of faith as though it were inherently without purpose. Garfitt uses form as a mellifluous tool: to gently position the ebb and flow of the human condition in terms of that – the natural world, the churchyard, the opening flower – which surrounds it. And it works symbiotically, as it worked for the Romantics – the one form harmonising, like an easy cadenza, with the other. Going some way beyond metaphor, Garfitt’s skill lies in the forging of achingly beautiful, and sometimes profoundly moving, images into plausible alloys of nature and the desperate ennui of loss or elegy. The two become indivisible, and an exquisite tension is relieved at point of recognition. No more so than in the fine poem ‘The Calm’, whose central figure maintains a resolute tranquility of demeanour in spite of the immanence of cancer; his playing of a harp to his friends represents the gift of amelioration conferred where the joy of hope has otherwise receded:


‘Interval by interval, gleam
by nailed gleam, you brought us
out of the shadow,

binding the pulse back
into the body, tight
as the matador’s wraps

under his suit of lights’.

Roger Garfitt
There is immense wisdom here: the failure of the body yields not the vicarious contagion of overwhelming pain, but an integrity which may be shared through the confraternity of music.

The shocking jolt of the sonnet’s hinged sestet and octet in ‘IED’ fixes the terrible anticipation of bomb disposal disconnection against the backdrop of all that a cut wire may precipitate in terms of damage and death. But more pertinently, the fickleness of the Afghani disposer’s own place in the ordering of war – the inequity of the unfolding of misfortune in vicarious behalf of those who orchestrate its ultimate causes, as though, in a figurative schema, the victims were to blame for the transgressions of the perpetrators...


‘   like the child bride brutalised
in a cellar, or the woman whose crime was to be raped.’

Or the protagonist of explosive violence, the bomb maker, in a poem about the blurred boundary between articles of faith and ‘democratic’ governance, compelled to act for Jihad in the shifting sands of power. Garfitt is acutely sensitive to the authority of metaphor in nailing the forensics of detection, and through detection, cultural inference:


‘The specialist shadows the bombmaker,
reads his devotion in his DNA,
in the drop of dried sweat on the casing
that gives another print-out of patience
and prayer.’ (‘The Sweat’)

Also by Steve Whitaker...
Poem Of The Week: 'Tamer & Gyrfalcon' By Yvonne ReddickThe Bog Togher And The Byerley Turk: Ireland's Forgotten Past By Turtle BunburyPoem Of The Week: 'Snow' By Edward ThomasSong Of The Wind: White Ink Stains By Eleanor BrownReview: Life In Our Hands at Settle Stories
Roger Garfitt’s constant crossing and re-crossing of interpretative borders amounts, in the end, to an unusual receptiveness to anxiety and fragility. In the magnificent ‘Presences of Jazz’ quartet of poems, the conflation of the colours and images of psycho-geographical identity are rendered en passant, as though to re-configure a sense of place in terms of the music which aligns mood with an historical moment. They are the unfolding of a flâneur’s imagination, and Garfitt’s lovely, intuitive sense of rhythm captures those passing moments in a frame of light which is, of itself, fleeting. Moving between Miles Davis’ Paris and New York, a Charlie Mingus piece, and a forensic portrait of Lester Young’s genius on the horn, the poet ambles through the byways of the US jazz world on the shoulders of giants. And he does so with immense skill, detachment and aesthetic awareness. Inhabiting respective identities through their innovative brilliance, Garfitt’s own predilection for improvisation melts the tableau into a synaesthesia which is conditional on recognition. The voices of Billy Holiday or of Sugar Ray Robinson are loudly resonant in absentia; the cultural iconography and festering racism of a distant era infect the narrative along with the descent into self-abusive nihilism which precipitates a sense of dislocation:


‘The spring before the fall,
the big coat held in close
though it’s said to be May,

the cigarette shielded
in his hand, he walks on
as if a sound were

But most, in Roger Garfitt’s wonderfully engaging collection, we remember the mood yielded up by a moment’s invested introspection. The piece of music into which Garfitt’s narrator delves in ‘Mingus: Self-Portrait in Three Colours’, bears the bloodshot viscera of suggestion. As luminous as the domestic interioriana of a painting by Bonnard, the workings of Charlie Mingus’ mind are opened to the incendiary colours of scrutiny:


‘anemones on a café table, arranged in a liturgy of love,
all the colours of blood against the small check of the cloth,
the blue has a premonition, there is an inkling of the red,

but the magentas pulse as they darken, still in flood,
searches rather than colours, chances of the light
as it runs the length of its wave, split seconds that give
the only glimpse of him.’

The Action is published by Carcanet.