‘Tizita, That Sweet-Sour Memory’: Unbury Our Dead With Song, By Mũkoma Wa Ngũgĩ 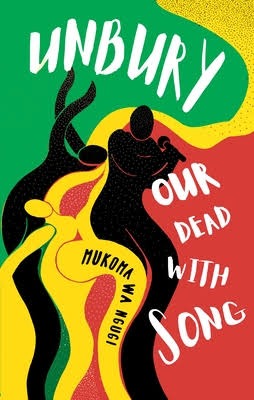 Noetic forces clearly exercise their influence on our lived experience, illuminating the penumbra cast by our subliminal consciousness. That said, perhaps visceral agencies exert a more cathartic energy able to penetrate the shadows cast within both our inner, and outer lives. Tolstoy told us that, ‘All the variety, all the charm, all the beauty of life is made up of light and shadow’. The Sufi poet Rumi once commented that, ‘The soul has been given its own ears to hear things that the mind doesn’t understand’.

Mũkoma wa Ngũgĩ understands these truths. Poet, author and Professor of English at Cornell University in New York, Ngugi is the son of the internationally celebrated Kenyan writer Ngũgĩ wa Thiong’o. His father spent a lifetime ‘Decolonising the Mind’ of Africa’s indigenous peoples through his acclaimed satirical novels. Ngũgĩ has blazed his own literary trail, focussing his considerable talents upon connecting the African diaspora.

His novel is no saccharine veneration of anthropodicy, but a heartfelt homage to the unflinching humanistic potency of the Tizita, Ethiopia’s ancient song tradition. It’s a stunningly vibrant attempt to render the mystical power of this unique song form in prose, whilst simultaneously celebrating its place and function in ancient and modern Ethiopian culture as an atavistic force of imperative contemporaneous efficacy.

In order to achieve his audacious creative aims, Ngũgĩ has drawn upon his innate poetic sensibilities and storytelling prowess to convey the emotive capacity of his beloved Tizitato to catalyse Pan-Africanism… not through the cerebrally censorious intellects of its audience, but through the universality of their bruised, beautiful hearts. Ngũgĩ wants us to hear the Tizita through his lyrical, transformative prose and understand that, ‘TheTizita is the blood in our soil’.

For me, he has not only succeeded in his endeavour, but given us something approaching a sublimely graceful, yet gritty gem. At the distinct risk of hyperbole, I consider this musically modulated novel to be a song …its words, emotionally variegated notes drawn from the major and minor scales and understood through the unbiased ears of our souls. As one of the novel’s characters tells us, ‘You don’t understand the Tizita, you feel it’.

Our story centres upon a Tizita competition held in an illegal boxing ring in Nairobi, Kenya. Four singers recognised as the acme of the form’s performers, have gathered for the chance to win immortal adulation, the event covered by a US-educated Kenyan journalist John Thandi Manfredi who writes for a popular, but low brow tabloid. Manfredi is our first-person narrator, both entranced and mystified by the Tizita. His fascination with both the form and its performers takes him on a spiritual odyssey as he travels to Addis Abbaba, Ethiopia in a bid to uncover the back stories of our four chief protagonists.

In seeking the truths lurking within the traumatised psyches of the musicians he obsessively scrutinises, Manfredi embarks upon a serendipitous quest for the self-knowledge needed to slay the insidious demons of ennui, ineffable disquietude and inauthenticity haunting his own insincerely manufactured identity. The Tizita has touched him and shown him, ‘Just how little of life I understand’. Manfredi has been stirred to consciousness, driven by an ineluctable need to respond to the Tizita, echoing the words of W.B Yates: ‘The world is full of magic things, patiently waiting for our senses to grow sharper’.

We are presented with a quartet of antithetical and intriguing principals: ‘The Diva’ whose bucolic, humble home life belies her glamorous façade; ‘The Taliban Man’, a privileged scion of a wealthy establishment family turned rebellious musical genius and antagonistic rapper; ‘The Colonel’, tortured by a blood-soaked military past littered with acts of savage brutality and now tortured by his nefarious sins; lastly, but not least, we have the enigmatic, tenderly acerbic ‘Miriam’, a geriatric bartender exuding sagacity squeezed like drops of pain from decades of repressed grief.

Mũkoma Wa Ngũgĩ
As Manfredi interviews each of our performers, their secrets are disinterred, and their jagged wisdom is disseminated through the prisms of their idiosyncratic, pain-flecked traumas. Each acts as a hierophant, sonorously decanting humanistic axioms, whilst simultaneously illuminating the Tizita form from within, much as a candle sheds light upon the recalcitrant shadows surrounding it. As the pieces forming the pictures of the protagonist’s lives slot into place, we move from the microcosmic to the macrocosmic, and the Tizita’s benevolent, but multi-hued light begins to envelop not just our characters, but the continent they inhabit.

The intimacy with which Manfredi shares the story has a strongly journalistic, reportage feel to it, lending the narrative the ability to democratise the views of those it centres upon. Ngũgĩ has licenced his protagonist to range across all echelons of the society he wishes to explore and exploit, echoing the words of Truman Capote – ‘You can’t blame a writer for what the characters say’. This device gives Ngũgĩ the ability to remain out of his own art, though I suspect Manfredi may be the product of faint autobiographical notes, or based upon aspects of the authors own life, particularly a fascination with and fathomless love of Tizita.

Beyond a virtuoso command of the architectonics required to ensnare a reader’s attention from first word to last, Ngũgĩ draws upon a prodigiously allusive treasure chest of refractory materials. We have reference to Shakespeare in a sophisticated utilisation of the Tempest’s Caliban, through to echoes of James Baldwin: ‘What Miriam was telling us. Like James Baldwin, was that we live in our times; we cannot live outside of them, but she was adding that we can dance just ever so slightly above the finite rhythm that is our lives’.

Where Ngũgĩ excels is in his ability to describe the music of the Tizita. My own literary veneration of E.M. Forster caused me to marvel at his descriptive prowess when giving us verdant impressions of Beethoven in Howards End. Ngũgĩ, though, transcends mere description, combining a profoundly consummate understanding of how music operates upon both the performer and the audience as a technical entity, whilst garbing these musings in the lexicon of a deeply romantic poet:

‘Kidane, (The Diva) walked over to the keyboard piano, bowed ever so lightly, waved to us, then sat down. She made some adjustments, took a dep breath, lifted her hands and plunged in. Only it was not a plunge, it was like a long plaintive wail. She had set the keyboard to church organ sound, and the wail, which was getting higher, was being pulled back by the trembling black keys that gave a cascading bass line until she found them to be in contentious harmony’.

Baldwin seems to lace the pages with his presence, both stylistically and thematically. I was reminded of his words when considering the novel’s thematic epicentre: ‘You think your pain and your heartbreak are unprecedented in the history of the world, but then you read. It was books that taught me that the things that tormented me most were the very things that connected me with the people who were alive, who had ever been alive’. Replace the word ‘books’ with Tizita and this could well be a quote from Ngũgĩ !

Thematically, we explore the transportive nature of the Tizita with its ability to evoke both unendurable sorrows and ineffable joys as it echoes, ‘a 200,000-year-old archive of extreme human emotions’. The Tizita finds ‘what the listener needs to hear’ and connects that pain, that sorrow with all mankind, and in so doing broadcasts one of the novel’s seminal messages…we all suffer, we all experience love and loss, and we are all one.


Also by Paul Spalding-Mulcock...
‘Writer, Maverick, Iconoclast, Visionary’: The Young H.G Wells, Changing The World By Claire TomalinContemporary Art, With An Ancient Past: Interview With Matt Leak – Mosaics Artist'The World Of Reality Has Its Limits; The World Of Imagination Is Boundless' : Interview With Kate LycettInterview With Chris M. L. Burleigh‘Very Few Of US Are What We Seem’: The Supper Club Murders By Victoria Dowd
Other issues dextrously infused into the fabric of the story like raindrops swelling a river are - xenophobia, the myth of Pan-Africanism in actions if not in words, the porosity of colonial borders, the multiplicity of personal identity, and the need to self-actualise as a cathartic and restorative balm for the soul: ‘It’s a beautiful thing to refract yourself back to yourself’.

Ngũgĩ unflinchingly addresses political corruption, cultural bias, the misrepresentation of Ethiopia as a dust bowl, thanks to Geldof and Bono and the contradictions unmooring individuals from a sense of mutual belonging and shared historical legacy heritage. He raises questions of existential human agency, Jungian self-knowing, kindred ship, interdependence and the capacity of the human heart to endure life’s slings and arrows. Mortality and its inevitability suffuse the novel’s bitter-sweet pages, though this Ankou carries a Krar rather than a scythe!

We are confronted with the truth that ‘the pain that carries my love’ is just much a part of who we are as any sacred memory. Above all we are reminded that ‘Home becomes the place where we live’, and that we all share that place.

So, a breathtakingly beautiful love letter to the Tizita rich in lyricism, tenderness and perspicacious insights into what it means to be human. The author suggest that his book is best enjoyed whilst listening to Tizita…I took his advice and would passionately recommend you do likewise!


Unbury Our Dead with Song is published by Cassava Republic