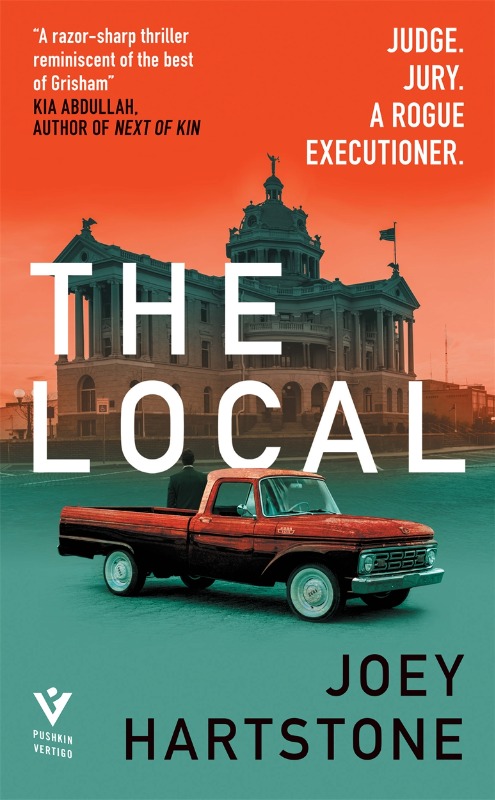 I’ve said before that I’m a fan of John Grisham, especially his legal dramas full of courtroom spectacle and intrigue, with a sharp eye on legal protocol and intricate detail. Well, this debut novel by a well-established script-writer, follows in Grisham’s footsteps. Slightly shorter, slightly easier to read but still with plenty of drama and spectacle and not just in the courtroom.


Zawar is not happy with the verdict and in a violent outburst in the courtroom, he threatens to kill the judge...
James Euchre (the name game is not lost on me) is a patent lawyer, in a small town in Texas. He’s a good one, frequently successful, but then patent law isn’t about risk-taking. It’s an easy existence; you don’t have to take responsibility for a man’s life as in criminal law - Texas still has the death penalty. Euchre is a ‘local lawyer’, retained by the ‘out of town big boys’ because he speaks the local ‘language’, that is, he can appeal to a jury, the ‘human lie detectors’ who don’t take kindly to arrogant outsiders who think they can befuddle a group of twelve good men and true, just because they don’t all read ‘so good’.

When Euchre fights the case of Amir Zawar, however, Zawar is not happy with the verdict and in a violent outburst in the courtroom, he threatens to kill the judge. Naturally, when the highly respected judge later dies, his carotid artery having been severed, Zawar, having shown himself to be impetuous and volatile as well as being a definite outsider in the little town of Marshall, is an immediate suspect. Without an alibi, he quickly finds himself on trial for his life.


Why would I want to reveal the ending ? Well, I will say it’s unpredictable given that the motive is not as clear as it first seems.
Against all advice, he insists he wants no one but Euchre to lead his defence team and James finds himself fighting his first ever criminal case to save a man from the death penalty, a man he isn’t even sure is innocent. The case is personal, too. Euchre was close to the victim, Judge Gardner, who had been a mentor to him and had provided him with a father-figure otherwise lacking in his life. It was not an easy case to accept.


While the plot drives the novel, the characters are important too, and the small town rivalries are longstanding
The evidence against Amir is not conclusive but, if the case is made strongly enough, the jury may just be swayed. It’s a capital crime and Euchre needs to establish doubt; how better than to find and focus on other suspects. He ends up making three strikes!

The narrative is not slow moving and towards the end, the pace picks up significantly. Why would I want to reveal the ending ? Well, I will say it’s unpredictable given that the motive is not as clear as it first seems. But it’s not over until the fat lady sings as they say and don’t be fooled, this one goes on to the very end.

While the plot drives the novel, the characters are important too, and the small town rivalries are longstanding. We learn a lot about James Euchre who carries his own heavy load of emotional baggage. He has a history in Marshall and it is only little by little that we learn what drives him – and, in part, what he’s running from. He has good reason to hurt.

Layla is a sharp criminal lawyer, trying to leave the stresses of criminal law for a while at least, but finds herself seconding Euchre’s defence of Zawar - and providing a touch of romance along the way, while ‘The Leg’ turns out to be a loyal and thorough investigator with an impish side to her. D-Cal, the lead prosecutor, has history with Euchre, dating back to the school football team, while Sam Whelan has crossed paths with him in other ways and has a long memory. Other locals are helpful - or not - since each seems to have their own smalltown history and script.

The novel explores friendship and loyalty, family and the rule of law, small town values and prejudices. With luck, it’ll be the first of many from Joey Hartstone.

The Local is published by Vertigo