'These Are The Hands' : Many Different Kinds Of Love By Michael Rosen 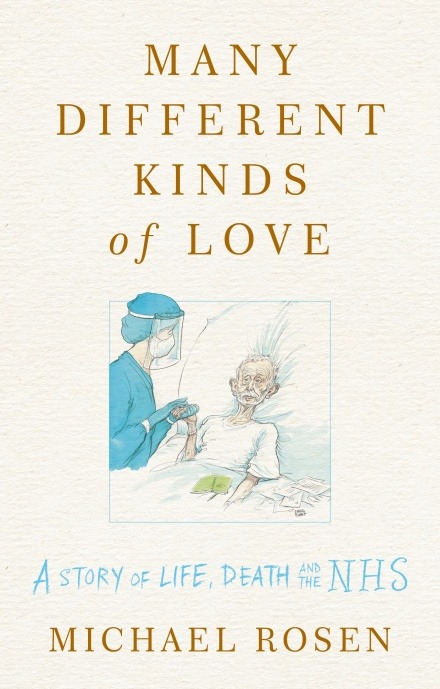 If ever the NHS needed to justify its own existence – it doesn’t, nor ever should – then its astonishing handling of the Covid crisis, and subsequent roll-out of a vaccination programme, is a triumph of endurance, endeavour and world-class effectiveness.

Michael Rosen’s new book is many things: an impressionistic, in places lyrical, diary of a terrible, defining experience; an ‘anthology’ of deeply touching notes and diary entries written by an assortment of nurses, reassigned professionals and volunteers describing their patient’s daily condition for when he emerges from an induced coma; a series of mails and texts of love and hope from family and friends. And, in the most compelling thematic subtext of any book I have read, it is an unalloyed homage to the Health Service, and to the enormous, ‘above and beyond’ commitment of its staff to a duty of care. That ‘extra mile’, the ministry of comfort and warmth, tendered even in mental absentia, dissolves the gap between Rosen’s narrative, and a narrative of despair.

For his reliving of something approaching despair in the early days of recovery is linear and forward-moving; the accretion of tiny details – the removal of a tracheostomy tube enabling speech for the first time, slight movement, tiny physiotherapeutic improvements – point to a painfully gradual process of rehabilitation, but rehabilitation nonetheless. And succoured, throughout, by the angels who watch over his darker moments of hallucination and anxiety, whispering that all will be well, Rosen finds first the wheelchair, then the Zimmer, then the walking stick, and finally his legs, in figurative ascendancy, and in despite of his own worst fears. 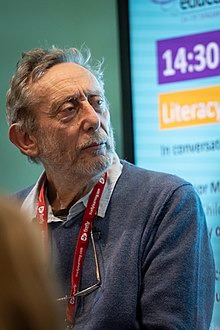 Michael Rosen in 2019
Michael Rosen’s theme is well served by the simplicity of his prose. Broken down into seven ‘chapters’ and a concluding poem – roughly annotating his journey from illness to coma to recovery to rehabilitation – the received effect is of an immediacy of apprehension: the detailing of unrelated thoughts, the experience of discomfort, the peripatetic mental diversion from a position of counter-intuitive stasis. But most, for the distilling of love in an eloquence of monosyllables:

‘All that care and belief and love
keeping me in the world.
I look at Emma
and try to tell her
but I’m often too upset to be able to say it
and just put my hand over my eyes
and feel the tears.’

Rosen’s occupation of a ‘liminal’ space during these days is self-reflexive: a word he uses to explain a kind of limbo between worlds to his English students is re-articulated for the purpose of describing a strange benumbed land between the living and the dead. He takes great joy from hearing Under Milk Wood on his iPad; the sound of Thomas’ words lifting his imagination from the miring of quietus: ‘how beautiful it is / how full of life and sadness / and love’.


Also by Steve Whitaker...
Poem Of The Week: ‘All The Pubs Where We Used To Meet Are Sinking’ By Carole BromleyPoem Of The Week: 'Going Blind' By Rainer Maria Rilke (1875-1926)Review: The Devil And The Dark Water By Stuart TurtonPoem Of The Week: 'All' By Alison BrackenburyPoem Of The Week: 'In The Attic' By Andrew Motion
His connection to domesticity, to the tangible world, is made tenuous by experience; it looks, in the words of a perceptive observer, ‘different’ to before Covid. And, in the mercilessness of hospital incarceration, where he remains scrupulously even-handed about the accumulated pressure that sometimes makes nurses short-tempered and mantra-repetitive, it is good to hear the panacea of Rosen’s instinctive comedy, which never really went away, return on full ironic throttle:

‘They’ve been worried
about my low blood pressure
but they’ve brought me the Daily Mail
so it’ll be fine in just a moment.’

Witheringly illustrated by Chris Riddell, this book is a dignified, almost overwhelming, response to a personal, a national, crisis. We are left awed by the capacity of the NHS to restore hope where it is most needed:

‘I try to fathom
this devotion.
They aren’t my parents.’

Many Different Kinds of Love: A Story of Life, Death and the NHS is published by Ebury Press.