The World Of Never Again: The Nine By Gwen Strauss 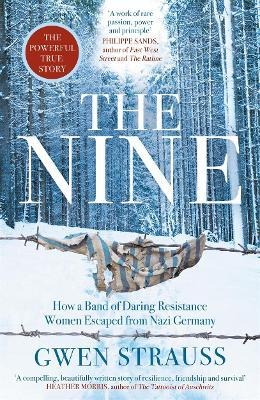 We are approaching a time of remembrance once again. I know many might not regard reading about the abhorrent treatment of fellow humans by the German SS during World War Two as entertainment, but sometimes it can be sobering and thought-provoking to reflect upon the trials and tribulations of others, to learn and to remember, and, sometimes, to put one’s own life into perspective. The heroines of this book were the same age as my own mum who volunteered to serve not long after the outbreak of war, and who spent five years wearing the uniform of the ATS. Despite the deprivations of war, she has some very fond memories of that time and of the friendships she made. The nine had a very different experience although they, too, made lasting friendships.

The Nine is the result of five years’ research and chronicles the true story of a band of nine young women, all in their twenties, all fighters for the French Resistance who were all captured at some time during 1944. They meet each other at various points on their journey between prisons and forced labour camps, and come together at Ravensbrück concentration camp where they form a powerful bond. It is not the usual story of "derring-do" and of heroic deeds by "our brave lads"; it’s not The Great Escape; it is the powerful and compelling story of a group of determined and brave women, led by the author’s great aunt, Helene, who escapes from a death march in 1945 and makes a perilous ten-day journey across the front lines to safety. They have to rely on the kindness of strangers, and they fear discovery at every step as they embark on what they refer to as their "camping trip". These women are incredibly young and they are united by their determination and their courage.

The book has a hesitant start as the reader is bombarded with information in no particular order, but the complexity may reflect the confusion in Europe at the time, to which German prisoners of war will have been privy. The narrative quickly settles into a clearer account of events, weaving each woman’s personal story against the backdrop of their incarceration and escape.

Strauss describes the misery and hardship in the camp, where "selection" was dreaded and execution was commonplace. The inhumane conditions and the brutal treatment of the women by the guards are laid bare, but she neither dwells on nor glosses over the horrors of the camp. She gives us a clear portrait of what their time there was like and offers some harrowing detail, which is, at times, extremely difficult to read when you recall that this is a true story. The worst image for me was the brief but vivid description of the Kinderzimmer at Ravensbrück, set up in the latter months of the war, to house the babies born in the camp, many of whom were the result of women being repeatedly raped.

The women endure a harsh and cruel reality but each has to find something to hold on to – be it a photograph, a memory or even a recipe, if they are to make it through. Their resilience is truly remarkable. The photos that are included also help to identify the girls and remind the reader they are real people. It is striking that the women, enduring in such desperate circumstances, are able to summon the will to care for one another, sometimes in an extraordinarily personal manner, to ensure the survival of as many as possible: "Charity is when you give what you can give: solidarity is giving when you have nothing to give". Afterwards, many agreed that it was the solidarity that helped them to survive.


Also by Artis-Ann ...
A Different World: Swan Song By Robert EdricDeep In The Shadowlands: The Damascene Moment By Malcolm HollingdrakeLong Lost Families: A Child of the Dales by Diane Allen‘It Seemed Innocuous Enough’: The Thursday Murder Club By Richard OsmanThree Strikes! : The Local By Joey Hartstone
So often, men who escaped the camps were regarded as heroes, but women also suffered physical and psychological torture, and their role seems sometimes to have been forgotten. As Strauss writes, "women have had to bear the burden of war far more than has been acknowledged".

Strauss goes some way towards redressing such an imbalance with this book, which also covers the months immediately after the war – a period often neglected. Once they return home, the women face further complications. It is significant that in Orphans of the Storm – a book I reviewed previously – one of the characters feels lost when she returns home because no one can truly share her experience. Strauss expresses the same sentiment in this book. On their return to Paris, the women experience "a sense of alienation in a world they had once belonged to" and many are "overcome with loneliness" in "a giant sea of displaced persons". Privately, they look at Paris and are "unable to reconcile these two different worlds". The French government and the people they come back to are not as supportive as they should be. These women are encouraged, even by their own parents, to never speak of their ordeal. Yet, "it’s there, all the horror, hovering just behind the curtain". The women were asked if they were still "pure", and, despite the horrific circumstances of their loss of virginity, were regarded as unclean, not fit for marriage, and to be looked down on by certain classes of society. Many innocent women who had already endured terrible suffering were unfairly deemed "horizontal collaborators" and punished accordingly. This latter section of the book offers a different perspective and gives an added dimension to the reader’s view of the women’s "safe" return home. It was an uncomfortable read, but by including an often forgotten part of the trauma, Strauss gives the reader a chance to raise a silent toast to these brave survivors.

We think of language as a means of expression yet sometimes "language limits our thinking" because we cannot fully put into words, "the depth of our experience". "How do we hold on to the past's truths without letting the past hold us back from living in the present?". The nine courageous ladies did survive, and "Although [they] never spoke of it, the memory of what [they] had lived through was always present". This is their shared story, one which many members of their families knew little about until the pieces were fitted together for the purpose of this book. It is a story of resilience and friendship, fortitude and perseverance, the story of a group of women who would live or die together – surviving against all the odds.


The Nine is published by Manilla Press