The Tempest - Steam Punk? Storm In A Teacup! 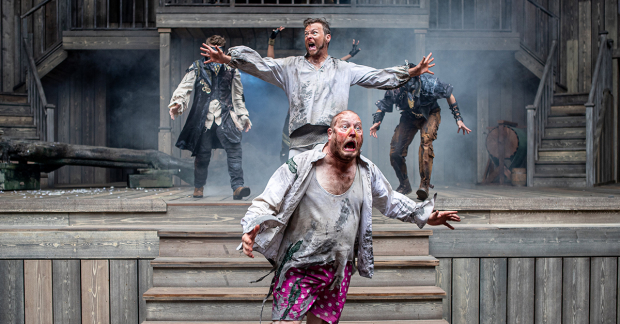 Cast of The Tempest. Photo ©2019 Charlotte Graham
Shakespeare’s The Tempest has an intensity that belies its ‘comedy’ tag and, somehow, has the feeling of comic relief bordering on tragedy rather than full-blown funny ha ha!

Perhaps one of the Bard’s shortest plays, it is also interesting if only for the fact that it was his last before he retired to Stratford; Will’s final play before drawing down his pension if you like!

Opening with a horrific storm and featuring a lobster clawed, albino-eyed villain, Caliban – at least that was his chosen attire last night! – it is hardly the stuff of comedy when you consider that its themes include slavery, rape, torture and murder!

The Elizabethans were a barbaric lot and, in between bear baiting and pillorying folk, they did enjoy a good laugh so it goes without saying that this latest offering at York’s temporary Shakespeare Rose Theatre was just as rewarding at Twelfth Night earlier in the week.

Twelfth Night, not unlike A Midsummer Night’s Dream, is a play dear to the public’s heart. This one is not as well-known although it does feature Trinculo the entertainer – Christopher Logan sounding as though he had just come from the backstop negotiations with his Northern Irish accent – and Peter Moreton’s Stephano the drunken sot, aka Sir Toby Belch and Sir Andrew Aguecheek in Twelfth Night; the comedy duo and play’s light relief. They were a welcome presence on stage.

Director Philip Franks and costume / scenic-designer, Adrian Linford, made the perfect choice in taking their inspiration from steam punk fashion and it worked brilliantly, serving to lift the barren, single prop stage – a large piece of driftwood – in the absence of theatrical trickery and a whizz bang lighting plot.
And that is this theatre’s strength and potential weakness: it is partly outdoors and has to rely on the acting, directing, stage craft and interaction with the audience for its overall triumph, all of which were exemplary, rather than simply its lights and scenery.

The Tempest is all about wizardry – Prospero was the first Gandalf – and Sam Callis was absolutely central to the play. Tall and imposing with his Lord of the Rings staff, he really anchored proceedings, stamping his authority on a production that might have been woefully compromised had he not been there.
Leander Deeny, as Ariel, Prospero’s Tinkerbell-like slave, was a wonderful cross between Wayne Sleep and Joel Gray’s white-faced Emcee from Cabaret; not quite as sinister but still a naughty boy!


Also by Phil Hopkins...
Overblown But Enjoyable - Spirit Of The DanceNewbies Give Joseph Fresh ImpetusA Dignity That Outwitted The HolocaustTriumph Of Priestley’s Timeless Drama of ConscienceZombie Attack In Leeds (Playhouse!)
At 7.30pm this outdoor theatre is unusually light and has limited opportunity to make enhanced use of a strong lighting plot so, at best, Franks used strategically placed stroboscopes to take his audience into the heart of the opening storm, cleverly evolving this sparse approach in Act II by introducing more atmospheric lighting, as darkness fell, to support his evolving themes of revenge and forgiveness.

And The Tempest is just that – a wonderful story of magic and spirits designed as a vehicle for more serious themes. It would have been written for an audience that had simpler values and, no doubt, less education, hence its extremes; you plot murder but I still forgive you.

In many ways this ‘comedy’ is subtly brutal, something that is translated through the abuse and subjugation of Caliban, played brilliantly, and consistently, by Raphael Bushay, and the enslaving of Ariel and his spirit comrades.

It draws you in and, as you emerge from the fog of Shakespeare’s complex, colourful language, you can hear the Bard’s wisdom shine through brighter than a comet on its way to earth.

This was another great production but, if you asked me to make a choice, I would have to say that Twelfth Night is the show to lift your spirits, the Tempest is there to show you a few spirits – not really one for folk on Prozac – and Hamlet, no doubt, will show you the true spirit of revenge by following through with full-blown death!