The Endless Opportunity Of Words: Lanyard By Peter Sansom 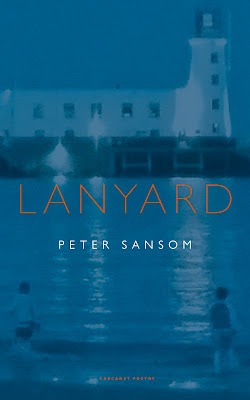 Acclaimed poet, teacher and publisher, Peter Sansom’s, fine new collection of poems for Carcanet fingers out into the hinterland of Nottinghamshire as though the constellation of his experience could not be separated from the network of roads, byways and redundant pit villages that formed it. The neural connections of the imagination are the microcosmic equivalent of other mappings, of recalled landscapes of woods and fields, dams and playgrounds. Perhaps the indivisibility of the association is what confers on Lanyard such an overwhelming feeling of déjà-vu, and guides the susceptible reader towards psychological re-rehearsals of her own:

Sansom’s debt to the poet Stanley Cook (1922-1991), whose epigram opens the book, is evident throughout his oeuvre: Cook cultivates a path through time and the terroir of the North in order to fix memory in its purlieus, doing so with great formal dexterity and observational precision to yield a sense of something beyond the ordinary in natural phenomena, or the dramas of the players within its regional confines. Both poets are anchored to the ideas of place and memory, just as both insist on the sanctity of the commonplace: the ‘Pigeons’, for example, in Lanyard, whose general vilification drops out of the sky dead on Cook’s altar of simple pleasures– ‘fanciers’, he said, ‘Are/were/will be great’. Sansom’s vision, though complexly approached and rendered, is rooted in what we now call the East Midlands, and you suspect he wouldn’t argue with the humility of Cook’s mandate, even if the artisanal registers have long since receded into post-industrial decline:

“I hope the steelworker and his wife next door would never need a dictionary to read my poems. I like to feel, too, that I have been as practical and unsentimental with a poem as if I had farmed, smithed or carpentered it”.

Seeking authenticity by looking backwards, the landscape Sansom surveys is a ‘knowing’ recollection, an uncanny re-actuation of the furniture of his own memory that yields no semantic confusion. Taking a leaf from his own wonderfully pared-back guide to the creation of poetry, Writing Poems, and, by indirect association, from Cook’s honest self-definition, Lanyard brings clarity and the prism of detail to the table. And if he is not afforded the gift of Douglas Dunn’s detachment – Dunn was an étranger in Hull – Sansom’s remarkable collection is wrought at the single remove of many years of ‘exile’ in the north.

The poet’s richly decorative poems alight on the glimmering of identifiers like a magpie, drawing obvious pleasure from the act of remembrance, and animating imagery in a near stream of consciousness, an ongoing monologue of impressions, noises off, incidents recalled with astonishing clarity. Encompassing family, especially family, in a panorama that includes those who have struggled, those who have gone, Sansom has the capacity to inhabit the mental spaces that were occupied by his forbears. And he sometimes does so in an easy vernacular of archaic regional expression that bespeaks the absorbing of frequently overheard linguistic nuances. The received impression is persuasive: that his father was born in ‘nineteen ought four’ (‘Twice round me’) is true to the father’s own demotic, and is no less accurate a register than being called in for ‘tea just mashed / and a bit of dinner’ on a winter Saturday in Sutton-in-Ashfield. The language betokens both affection and a sense of continuity.


‘D.H. Lawrence’ is beautifully executed, redolent of place and purpose, an elegy for family and for the deracination of a tenacious culture.
Truncated ideas shortened for focus are common here: In ‘Roofer & Son’, the tradesman ‘earns a week in a day’; in ‘King’s Mill’, the fire is ‘banked up / for Steve Davies on the telly’ – and all describe the variegation of context in simple but eloquent images, enabling the reader to construct a proximal tableau in which chronology, class, domestic circumstance and the business of wealth disparity all appear offstage, but visible. And the easy drift from one suggestion into another, as though there was little demarcation between a landscape observed from the perspective of memory, its residue in the present, and the thread of insinuated, extraneous voices like those that animated Laurence Sterne, is accommodated with cheerful elan on a picaresque journey sometimes taken simultaneously across several temporal realms. The psycho-geography of Nottinghamshire, enlivened no end in the conversational style of the poem ‘D.H. Lawrence’, embeds the writer in the Midlands as if the collective local sentiments were unable to countenance his presence elsewhere on the world’s bohemian margins. Anchored in a figurative cell of airless dark beneath Sherwood Forest, the bonds of working class affiliation are altogether too strong to vouchsafe release for the tubercular and angry ‘mardarse’ from Eastwood, whose sense of consanguinity might have sunk him had it not made him rage. What tells more than the compromising of truth is the propagation of a shared illusion, which Lawrence belied, in spite of the cultural blandishments of heimat:

‘You’d no need for shame, though you were stung
by those rows of terraces, donkey-stone homes,
an evening river and giggling haystack next
to a slag-heap, still in their pit-dirt, still in their songs
your hands blue with ink their roaring songs
at the Badger Box, and my teenage aunt behind the bar
who thought you were noat, and who
though wrong was right to throw you out.’


There may, in any case, be no disconnection between fixing cars and writing poems. Or between the art of playing football and commemorating the memory of nailed boots and itchy jerseys in verse.
‘D.H. Lawrence’ is beautifully executed, redolent of place and purpose, an elegy for family and for the deracination of a tenacious culture. As, in a different way, is the strange, time-transcending ‘Emily Bronte’, whose moveable locators negotiate our relationship with the novelist and poet from the perspective of a mental journey through Haworth in tangential present tenses, as though Emily’s vision might not be circumscribed by the ‘stoneware and fridge magnets’, or the relentless pastiches of our own time; the Black Bull unaware of her calling for the inebriate brother whose own image was painted out of the canvas. Sansom’s final lines draw the strings of perception together, foregrounding the ‘midnight blue velveteen sofa’ on which she expired, and which remains in a front room of the parsonage. The narrator’s short and enigmatic ‘too late / inoculate’ sounds like a premonition, or an acknowledgment of the inadequacy of contemporary medicine against the consumptive prompt of an haemoptysis in a handkerchief.

Either way, the past endures in Sansom’s poetics, leaving traces like clots of blood, as if an event that unfolded in a draughty parlour in December, 1848, might burn the connection into the fabric of our emotion in perpetuity: ‘Only our hearts and her heart coincide’. The poet’s sense of temporal connectedness is almost second nature, yielding no sense of abnormality or disjuncture; we are obliged to consider the possibility of co-existence, of former lives bound, palpable, in the present, and yielding new meaning, like Peter Ackroyd’s London apparitions. The lively continuum of observation, right across this fine collection, is its salvation and reward: the natural rhythms that sometimes encourage the illusion of sounding like free verse, without being in any sense free of the hiatuses, pauses and reversals that monologues accommodate, work seamlessly on the ear. Not least when trawling the backwaters of memory for images which are affecting in their attention to the unheralded; Sansom is adept at finding suggestions of hope in the most unprepossessing of circumstances. In this mood, a referendum result day visit to a bay ‘Beyond Harlech’ offers an unlikely catching of happiness that is briefly impervious to the world outside the window:

‘And so it was that I stood
with sparkling water in a beach cafe
far from the/at the centre of the
world with her friends and fellow petitioners,
while the world went to hell, or our
little bit of it, and of course America’.

The tentative phrasing is characteristic of a mind given to binary ambivalence, if not to honest uncertainty: the petitioners exist simultaneously outside of the realm of brutal political reality, and at the centre of the world of ‘change’ making. Sansom’s sincerity can be both self-lacerating and very funny; his narrator’s precarious grip on car maintenance, rendered joyfully reckless by the remoteness of Wastwater in the Lake District, is given up to hilarious scrutiny in the easy vernacular quatrains of ‘It’d Been Round the Clock, Twice Maybe, And the Guy’:

‘did the test drive himself, then put it on a ramp,
gift-horse or death-trap, who knew. Three doors, four gears
and several careless owners, we paid to have it rebuilt
as it fell to bits, clutch, brake-pedal, the wishbone,

There may, in any case, be no disconnection between fixing cars and writing poems. Or between the art of playing football and commemorating the memory of nailed boots and itchy jerseys in verse. Dangling so long over the books that he barely notices them, the poet’s laces in ‘Football Boots on Top of a Bookshelf’ are as invaluable a catalyst for his creative impulse as so many other ‘totems’ of the recalled domestic quotidian. Fitting that they trail over the Dickens and the Eliot; more significant still that they share a common heritage:

‘I saw them after school, father and son
booting a ball one touchline to the other.
There they are. And here I am with them
up a ladder with a book and a boot’.

Lanyard is a wonderful gift to culture and remembrance.

Lanyard is published by Carcanet.