The Decline Of The American Dream: F. Scott Fitzgerald's The Great Gatsby 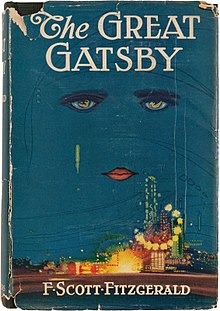 First Edition Illustration
Oh no! I told you previously that my favourite novel was Jane Eyre and now I’ve remembered The Great Gatsby. The Oscar-winning 1974 film with Mia Farrow and Robert Redford, despite seriously mixed reviews on its release, is far better than the more recent version with Leonardo di Caprio, but that’s my opinion (and probably my age!), and it’s not even wholly true to the book.

I have little literary features in my garden: ‘Squirrel Nutkin’, the ‘White Rabbit’ and (a mirror which creates) a hole into ‘Wonderland’. My delicate pale pink and purple fuschia blooms are perfect ballerinas, ‘like a Degas dancer’ (Fanthorpe), Mayella’s red geraniums live in the corner (Harper Lee), and my roses would ‘smell as sweet’ whatever they were called. Of course, I also have a bed of ‘Parsley, Sage, Rosemary and Thyme’ (trad.) and in the Spring, ‘a host of golden daffodils’ (Wordsworth) follow the innocent nodding heads of snowdrops (Lesley Norris), but my first addition was a hanging candlelight which I called my ‘light off West Egg’ (or should it have been East? - and it wasn’t green anyway), a reference of course to the beginning of the novel The Great Gatsby, as the narrator, Nick Carraway, looks over to Gatsby’s place.

Published in 1925, F. Scott Fitzgerald's classic is a novel of triumph and tragedy, which captures a cross-section of American Jazz-age society. It is set in a fascinating time when American prosperity was soaring – an inherently unstable era before the Wall Street Crash and the Great Depression - and when people reacted to the shocking experiences of World War One, with hedonistic, wild and extravagant living; the hysteria of the Roaring Twenties. There are two kinds of wealth in The Great Gatsby: the inherited wealth of Daisy and Tom Buchanan which brings with it social standing and therefore, protection, and that of the nouveau-riche Gatsby, the origin of whose money is somewhat questionable in this era of Prohibition. Old money looks down on new as lacking class and breeding and the likes of Gatsby are vulnerable to the whims and caprices of people like the Buchanans, as they try to forge a place for themselves in society.

F. Scott Fitzgerald, 1921
The book follows Jay Gatsby, a man who orders his life around one desire - to be reunited with socialite Daisy Fay, the love he lost five years earlier in 1917, when her family disapproved of her liaison with a mere soldier. She is now married to the brutish and arrogant Tom Buchanan. He, meanwhile, is engaged in an illicit affair with Myrtle who plays a more prominent role later in the novel. Gatsby's quest leads him from poverty to wealth, into the arms of his beloved, and eventually to tragedy. Narrated by Gatsby’s neighbour and Daisy’s cousin, Nick Carraway, the story is told in flashback, one year after the events occur. While initially seduced by Gatsby’s wealth, this thoughtful young man who becomes Gatsby’s friend, sees through the glitter and glamour to the moral emptiness and hypocrisy beneath.

Gatsby’s extravagant parties are famed and people flock to his house to use his pool, drink his champagne and eat from his sumptuous table. These gatherings are lavish, decadence taken to the extreme. Gatsby is the ideal host and seems not to mind being taken advantage of as every weekend continues in the same pattern of excess. He appears to be the perfect gentleman, gracious and kind-hearted, but his every effort is an attempt to lure to his home, Daisy, the woman of his dreams. Having amassed a great deal of wealth at a relatively young age, Gatsby devotes himself to acquiring possessions and throwing parties which he believes will enable him to regain Daisy’s love.


Also by Artis-Ann ...
The Heat Of The Night: An American Marriage By Tayari JonesReview: Losing You By Susan Lewis'You'd Better Get Yourself Off Then, Pet': The Seagull By Ann CleevesThe Bonds That Define Us: And The Mountains Echoed By Khaled HosseiniReview: Beast By Chris Speck
There are plenty of rumours about Gatsby but no one really knows much about him – nor seems to care enough to find out. He has reinvented himself, creating a past which is later discovered to be as false as his name; in reality, he is James Gatz, a sensitive man who idolises wealth and luxury and whose father, an ordinary mid-westerner, always believed his son would ‘make something of himself’.

Gatsby's story is the rags-to-riches American Dream. A young man from the middle of nowhere who, through his own ingenuity and resourcefulness, makes it big. But Gatsby is really alone and Fitzgerald makes clear that the American Dream is a false promise. Gatsby’s dream to win back the woman he thinks he loves, is shattered by infidelity, death and as Nick so aptly calls them, ‘careless people’.

In many ways, it is a document of social history. In some ways brutal and in others, sensitive, this more challenging read is definitely thought-provoking and certainly worthy of its place on anybody’s bookshelf of favourites.